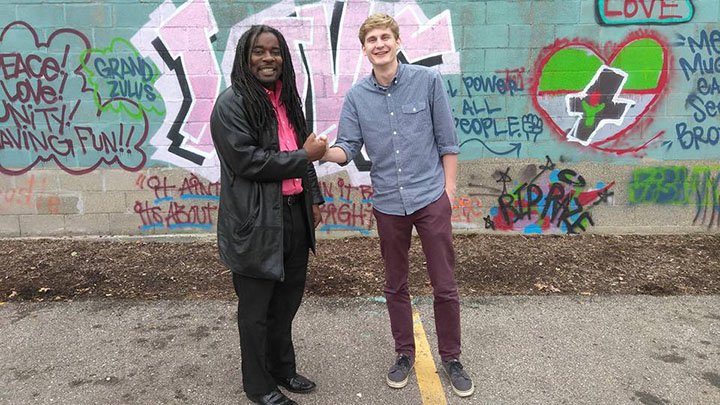 For film major Nathan Roels ’17 (Northpointe Christian H.S./Grand Rapids, Michigan), redemption stories are crucial to Christian hope—so for his final film project at Calvin, he was grateful for the opportunity to tell the story of a former prisoner’s reconciled relationships.

More than a class project

For Roels’ senior advanced film making class, he was assigned a group project to create a documentary. Roels suggested highlighting the story of a prisoner in the Calvin Prison Initiative at Handlon Correctional Facility in Ionia, Michigan. Although this plan fell through, the warden at Handlon suggested that Roels get in contact with former prisoner Renardo Bowles.

Bowles, imprisoned for 23 years for murder, is now married with a son, works at Team Wellness Center in Detroit, and is reconciled with Geneva Moore, the mother of the man he shot. Not only has Moore forgiven Bowles, she now considers him her son.

Compelled by Bowles’ story, Roels and his group members drove to Detroit for filming. As a native Grand Rapidian, the filming process was especially powerful for Roels as he had only ever visited Detroit for Tigers baseball games.

“I went to areas I never would have gone by myself and met a lot of people living very different lives than me,” Roels said. “But one of my favorite parts of being a film major is going to different environments to engage and interact with people in completely different life circumstances.”

During the filming process, Roels directed the film, set up shoots, ran the camera and participated in editing. He also had to request permission to use archival prison footage from Calvin. The Renardo documentary is the lengthiest project of Roels’ Calvin career and his most influential work.

The documentary has powerfully affected those within the Calvin community, but especially Bowles’ connections in Detroit and those that viewed its presentation at Handlon. “People that know Renardo have been really emotional about the film,” Roels said. “And at Handlon, many of the inmates cried. It was a highlight for me that the film was able to have an impact within a prison.”

To Roels, redemption stories are important to capture, especially as a Christian. “We as Christians see that redemption is really what life is all about,” he said. “The forgiveness of this story is rare and powerful. Geneva forgiving the man that murdered her son, and then taking him in as her own, is a tangible example of forgiveness—it makes you examine how you are living your own life.”

Roels hopes this documentary will inspire others to forgive people in their own lives, and that he will create more documentaries of this nature in the future.

“If I make documentaries later on, I either want to tell positive stories that give people hope, or tell stories that shine a light on issues in order to spark a change,” Roels said. “It is important to give a voice to those who are marginalized. With this documentary, I wanted prisoners to have a voice because we rarely hear from the side of the prisoner.”

Although Roels was interested in social justice in high school, both his experiences as a Calvin student and a film major have played major roles in the growth of his passion for social justice.

“At Calvin, I developed a much stronger passion for social justice that I didn’t have before. When you are passionate about something, it tends to seep into whatever concentration you are in. Since I have a passion for certain types of social justice, it has become part of the films I have made, and will continue to do so because I want to make a change,” Roels said.

For summer 2017, Roels will be directing a documentary about professional boxer Ardreal Holmes Jr. from Flint, Michigan, with Gorilla Pictures, a film and video production agency in Grand Rapids.