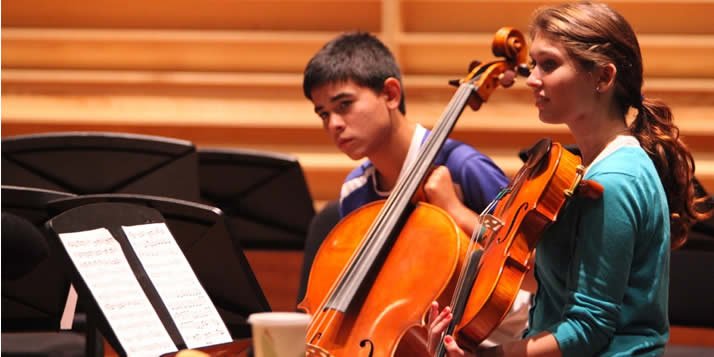 Every year, Calvin hosts six days of rigorous instruction and performance for string performers of all ages.

On Sunday, Aug. 19, the strings came to Calvin. The annual Calvin String Summit gathered high school– and college-level violinists, violists, cellists and bassists for six days of in-depth instruction and rigorous practice. As in past years, this year’s aspiring young performers—recruited mainly from area colleges and youth symphonies—learned from dedicated peer musicians and high-caliber faculty.

"It’s like going to an all-star event,” said music professor David Reimer, the program’s founder. “The idea is that you mingle with other people; you broaden your world.”

This August marks five years of the camp, which began with 29 students in 2008 and has welcomed up to 56 students each summer since. “Part of the vision for it is that we’re building a community,” Reimer said. This year, that community was 54 students strong.

Musicians in the making

Among this year’s String Summit attendees were the members of the Gioioso Quartet, a longstanding Calvin group which rotates members as they graduate. The quartet currently features students Katelyn Geleynse, Anna Plantinga, Katie Seifert and Amy Tenney.

The women say the summit gets them excited for a new academic year and helps them to work together as an ensemble.

“I kind of think of this as boot camp for string players,” Geleynse said, adding, “I’ve noticed in my playing that I’ve improved (during) this week.”

Another group showcased at the summit was the camp’s lead quartet, a group of musicians from across the country invited to the summit as an example of polished musicianship. Members of this quartet—Korynne Bolt, Julie Castor, Drew Robertson and Charlotte Munn-Wood—traveled to the summit from as far away as New York City and as close as Kalamazoo.

“A lot of the high-schoolers have learned to adapt really fast,” said Robertson, who plays viola and is working on his master’s degree in music therapy.

Castor, an accomplished New York city–based violinist, echoed Robertson’s sentiment about the summit musicians: “I was certainly not playing at that level when I was in high school.”

While high school and college-level students were making impressive strides the week of the summit, one remarkably youthful musician made her first appearance at the summit this year—at the age of 13. But playing alongside older musicians didn’t seem daunting for Harmony Kelly of Allegan, Mich.

The teen violinist has always loved music, said her parents, Frank and Wendy Kelly. Asked if he and his wife inspired Harmony’s love of music, Frank responded, “She trained us.”

Faculty from other institutions also travel to Grand Rapids for the summit. Bruce Uchimura, a professor of music at Western Michigan University, has served as a faculty member at the summit since its inaugural year. A multi-talented cellist, teacher and conductor, Uchimura sees the program’s students as being ripe for “imprinting” in their craft and believes events like the summit are vital to the future of string musicianship. Whether or not summit students make a career in performance, he said, they will embrace music throughout their lives. “That’s how we keep our art alive,” he added.

Elisabeth Adkins, another summit faculty member who has been with the camp since 2008, has traveled from her home in Maryland to teach at the summit four out of its five years. “The caliber of students has really increased,” she said. Adkins, who served as Associate Concertmaster of the National Symphony in Washington, D.C., considers the camp a professional and pre-professional program. “It’s very exhilarating to be teaching and coaching at this level,” Adkins said.

“The rewards for a coach are not so much how accomplished each student is but how excited they are about it and how dedicated they are,” she added.

Along with Adkins and Uchimura, this year’s faculty lineup featured Joseph Conyers, assistant principal bass of the Philadelphia Orchestra (and former Calvin professor); Annie Fullard, violinist in the Cavani String Quartet; David Kim, concertmaster of the Philadelphia Orchestra; and Joseph Brant Taylor, cellist with the Chicago Symphony. In addition, the Enso String Quartet, a professional quartet based in NYC, filled a two-day residency (including a concert performance) for the summit.

The String Summit runs for one week each August, and welcomes the public, free of charge, for performances. 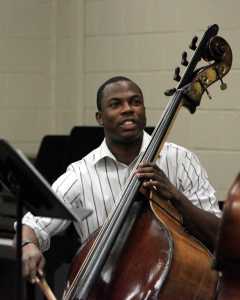 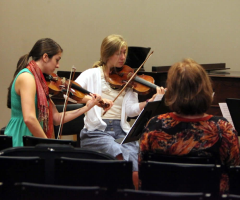