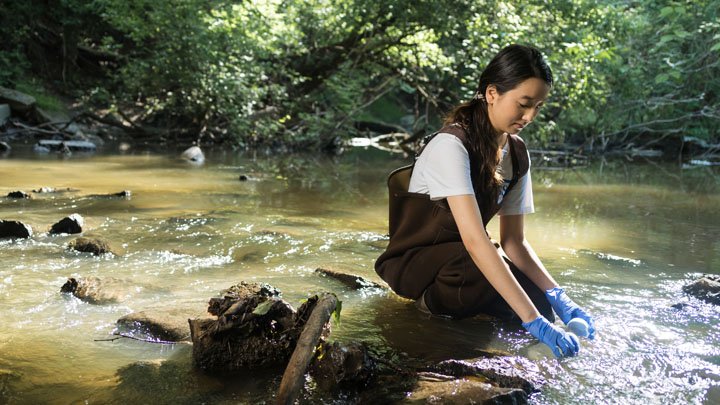 Calvin College faculty, staff and students are engaged in education, research and restoration projects in the Plaster Creek watershed.

Annaka Scheeres ’16 and Charlotte Reynolds ’16 assisted Jason Van Horn, associate professor of geology, geography and environmental studies, in creating a mapping systems' website for the Plaster Creek watershed, which borders Calvin College and is one of the most polluted watersheds in the state.

The mapping system, more specifically known as a story map journal, is called The Story of Plaster Creek Watershed. In 11 slides, it lays out the history of the watershed and all of the factors that led to its current state of ecological degradation. It also tells a story of human social inequity in the communities that lie along the watershed. The site uses a series of interactive maps, videos and layers that can be turned on and off to show factors in play.

Interest in the project

Van Horn recalls how he was first drawn to the Plaster Creek Stewards, a Calvin-based group that takes care of the watershed, during a presentation at a fall faculty conference, when faculty members Gail Heffner and Dave Warners spoke about the work of PCS and showed a map of the watershed’s boundaries.

“I’ve been involved in different research aspects that have dealt with Plaster Creek since then,” he said, “and it’s been mostly in a mapping capacity.”

“This [mapping system] was just a continuation of that ongoing work and interest in Plaster Creek,” he said. “My hope was that it would be able to expand knowledge and education about Plaster Creek and at the same time develop greater synergy here at Calvin and in the community around the watershed. Hopefully we’ve achieved that.”

Tackling it step by step

Van Horn said his student researchers logged 800 hours between them on the project in the 10-week summer period they were working on it full time.

Scheeres and Reynolds agreed that their work was a total team effort.

“There were various steps of the project,” Reynolds said. “The first one was thinking about what we wanted to include in the project. What was important to communicate to the public? So that we did together; we brainstormed together. We created this document together of what we thought were key aspects that needed to be communicated. And then, again, with the maps that we made that focused on each of these aspects, it was a take it as it comes thing: Once you finish one map, move on to the next one. And the same with the story map journal—we worked together on the narrative text.”

To find the necessary data, the pair combed through public records, including the Environmental Protection Agency, the U.S. Census Bureau, the Centers for Disease Control and Prevention and the state of Michigan’s website.

Then, they went through a process known as data cleaning and formatting. After that, they used the GIS software to make the maps.

Scheeres said that ultimately one of the biggest aims of their efforts was to make a difference in the watershed.

“Our hope is that through telling more of a narrative story, accompanied with visual shots of the watershed, that that will really compel people to care about what’s going on and to ultimately engage and try and restore Plaster Creek watershed with the Plaster Creek Stewards.”

Van Horn said there already has been interest on the part of local government officials. Carrie Rivette, the wastewater/stormwater superintendent for the city of Grand Rapids, sees the site as an incredible resource.

“The additional information on soil classifications will be invaluable to us when identifying where green infrastructure can be best used,” she said in an email to Van Horn. “Thank you for sharing this with us and leading students in this direction. It’ll be a great resource for the city, as well as an amazing public education piece.”