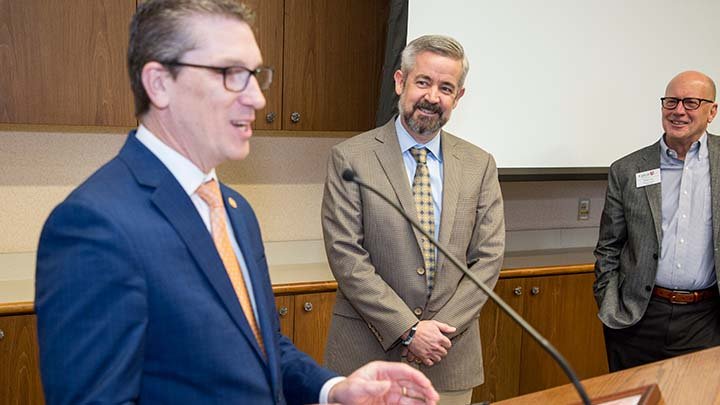 On April 22, Mark Huizenga, a state senator in Michigan, presented Michael Le Roy with the special tribute during the meeting of the university's board of trustees.

On Friday, April 22, President Michael Le Roy was meeting with the Calvin University Board of Trustees when two surprise guests walked in the room: Mark Huizenga, a state senator and Calvin alum, and Emerson Silvernail, Calvin’s 2020 student body president.

The two were delivering a special tribute to Le Roy, honoring his steadfast commitment to the Calvin University community.

“I’m overwhelmed, humbled, and grateful,” said Le Roy following remarks from Huizenga. “First of all, I didn’t know this was possible. Second of all, it’s bipartisan, so I like that a lot.”

The tribute, which was read by Huizenga begins with “LET IT BE KNOWN, That it is with a deep appreciation that we honor Dr. Michael Le Roy upon the occasion of his retirement after a decade of serving as President of Calvin University. As Dr. Le Roy transitions into this next phase of his life, we add our voice of thanks to those of the professors, administrators, students, parents, and alumni throughout the Calvin community for a job well done.”

The tribute goes on to applaud Le Roy’s leadership during a changing higher education landscape and his tireless pursuit of the institution’s long-term health. It also highlights the new paths for Calvin programming under his tenure, including, among other things, the founding of the de Vries Institute for Global Faculty Development, the creation of the Calvin Prison Initiative and Calvin’s transition from “college” to “university.”

The state’s leaders also applauded Le Roy for his collaborative leadership, willingness to listen to various viewpoints on any given matter, and his commitment to students. And both the first dog and Le Roy’s facial hair made it into the tribute.

“He never missed an opportunity to meet with students, often taking time out of his busy schedule to host students in his home, meet for coffee, or surprise folks while on a walk with his famous dog, Gus. For more reasons than his welcoming smile and iconic beard, Dr. Le Roy is also widely regarded by Calvin’s parents & alumni as a kind, genuine man,” reads the tribute.

Le Roy’s relentless advocacy for all of private, Christian learning institutions, his establishment of partnerships with peers across the globe, and his steadfast faith were also highlighted in the tribute.

In the words of Dr. Le Roy’s students, “everything he does points back to his faith.”

The tribute concludes, “IN SPECIAL TRIBUTE, Therefore, this document is signed and dedicated to thank Dr. Michael Le Roy for his commitment to the Calvin University community as President and many years of sacrifice. May his retirement be filled with God’s providential health & happiness, along with well-deserved rest. Well done, good and faithful servant.