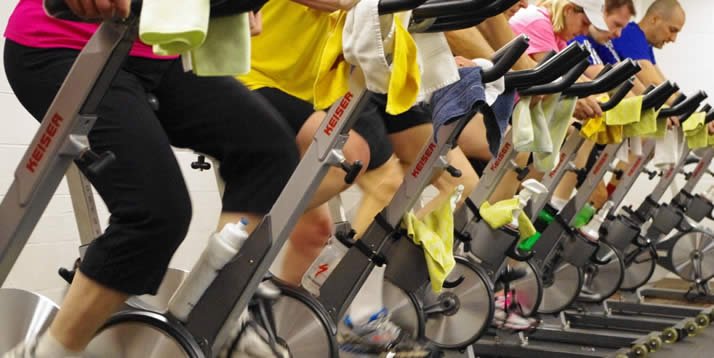 When Heather Chapman and Michael Wildschut learned that Calvin biology professor Darren Proppe was diagnosed with relapsed lymphoma, they immediately thought about what they could do to help him and his family. They decided to organize a fundraiser based on a common interest they all share: spinning.

“He’s been in it [spinning class] for several years now,” said Michael Wildschut, event coordinator for conferences and campus events, who is co-leading the spin-a-thon fundraiser with Chapman, the college’s environmental health and occupational safety officer. “I usually see him at a noon class once a week, so we got to know each other. We both share a love of bikes and riding."

Proppe began spinning when he first started teaching at Calvin in 2012. He soon became friends with Chapman and Wildschut.

“We’re all in there exercising,” Wildschut said. “We’re not in there having a dance party, we’re working hard. So I think there’s a camaraderie that’s built with that because we’re exercising and pushing ourselves together, so in some ways we really connected. There’s a core group of people—we all know each other well and we enjoy each other’s company.”

“Part of the appeal to this is that Darren is a part of the community,” Chapman said. “His need for financial aid is significant. That was the draw to coordinate something to help him out.”

The donations raised through the fundraiser will go directly to Proppe, who will be able to use the money to help pay for medical expenses, groceries and general support for his family. Last December, Proppe was diagnosed with relapsed lymphoma. He headed to Houston, Texas, with his family to revisit the same medical doctors that had worked with him in past treatment.

Chapman and Wildschut were further motivated to help Proppe because they could identify with his situation.

“Both Heather and myself have young families like Darren,” Wildschut said. “We kind of could envision ourselves in his situation…so it hit home for us that way.”

Proppe’s original prognosis was grim—predicting that he only had about a one-percent chance of surviving the year. But a recent biopsy brought better news. While the cancer is currently incurable, it is a slower-progressing form of cancer, rather than the aggressive malignant form that was initially diagnosed. The average life expectancy for this cancer is about 20 years.

Proppe is grateful for the burdens that the community is helping him bear.

“I think the beauty for us is that it [the support] has certainly helped us [in] dealing with the financial aspects, but even more with the mental and spiritual aspects,” Proppe said. “The prayers we have been getting have helped us to rest in God’s grace no matter what the [circumstance] is.”

While the news of relapsed lymphoma was difficult to hear, Proppe is thankful that the initial prognosis was inaccurate.

“I would say that a challenge of going through something like this is trying to understand God’s goodness,” Proppe said. “Just trying to figure out what this [situation] means in light of His goodness, no matter what the outcome is.”

The experience is helping Proppe to appreciate every day and grow spiritually in his walk with God.

“[I’m hearing] God say ‘Yes, bad things happen, but no matter what, I’m walking with you,’” Proppe said. “I think things are looking better for us. But I never know when that could change. The real outcome is learning to [cherish] each day that we are given and not to squander time on pursuits that aren’t valuable or important. That’s a big takeaway from this.”

News of the upcoming spin-a-thon fundraiser was a welcome surprise for Proppe.

“Certainly the support from Calvin has been excellent,” Proppe said. “You never know what to expect for support and where it will come from. It has brought joy to see support from the group that I’m with [spinning] a few hours each week.”

“They’ve been a wonderful support,” he said.

Throughout the 12-hour spin-a-thon on March 7, there will be movies shown on a projector, games and snacks to help pass the time.

“Because Heather and I are the instructors, we’re used to giving out the instructions, and giving out the gears, and pushing people and challenging them,” Wildschut said. “So we thought it would be a fun way for them to be able to get back at us and to instruct us. So people will be able to donate and will be able to tell us what gear they want us to ride in, and for how long. So if they don’t really like us they can make us ride really difficult for 20 minutes.”

Some people might be purchasing a tutu and offer to pay Chapman or Wildschut to wear it.

“Anything we can do that will raise money for Darren is what we’ll do,” Wildschut said. “If that means I look a little silly through the process, that’s totally okay with me.”