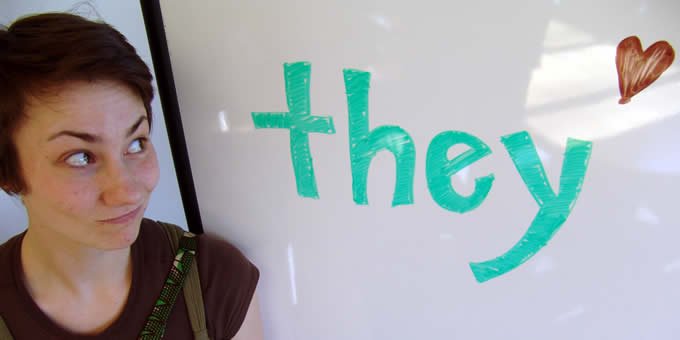 Betsy Sneller is a defender of “they.” She believes that “they” functions better as a third-person singular pronoun than alternatives like “he or she” or “it” or “thon.” And she has staked her English honor’s thesis on the premise that “they” will have its day:

"People use it all the time. They understand it; It’s historical—and the alternatives to it are inadequate,” said Sneller, an English and interdisciplinary major who studies linguistics.

The right of "they"

What Sneller is defending is the right of “they” as a plural pronoun to serve as a third-person singular pronoun.

"How it’s usually used is, ‘When a student gets a good grade on a paper, they feel wonderful,’” explained William Vande Kopple, a Calvin English professor and Sneller’s thesis advisor. Unfortunately, using "they” to refer back to the singular “student” sets up a singular/plural disjunction in a sentence, he said. The same problem occurs when “they” functions singularly in the possessive form.  “The classic example is ‘Someone left their coat here,’ Sneller said.

The root of the grammatical problem, professor and student agree, is that the English language does not have a pronoun to serve as the third-person singular. While “singular they” has long been accepted in spoken English, it has not made a transition into print.

"It has been in wide, widespread practice in spoken English for years, and it has only recently been pushed for written,” claimed English professor James Vanden Bosch. “If you do what we do in spoken, an editor would have very big concerns about what look like unwarranted shifts in number. “What we’re talking about is the difference between unedited, spoken English and usually edited, written English.”

Historically, writers used “he” to refer to persons of either gender. “When a person gets a good grade, he … ,” said Vande Kopple. "That’s how I was taught.”

In recent decades, however, as English has become more gender sensitive, using “he” to refer to both male and female persons has become unacceptable. One alternative is to use “it,” Vande Kopple said, demurring: “We don’t want to use ‘it’ for people.”

Another is to use the gender-inclusive “he or she”/“she or he.” "Laughably unwieldy,” scoffed Sneller, demonstrating: “‘Someone left his or her coat here.’ If you tried to write that in a paper, whoever is reading that paper will just laugh at you.”

Over the decades, many candidates have been put forward as the solution to English’s third person singular quandary: “thon,” “ve,” “zhe,” “ghach.” “There are some unbelievable creations,” Vande Kopple said of these epicene pronouns. “I don’t think the language is going to change in this intimate way—pronouns and such.” (“I like that ghach …,” he confessed. “That’s from the Klingon language.”)

Singular they is a singular issue for academics, Vande Kopple said. “All of us who teach in composition have to respond to this. It’s probably my biggest bugaboo right now … I have to decide whether to take points off or not.”

Sneller has been marked down for employing singular they more than once—that, in fact, is what inspired her research. She has looked deep into the history of both English grammar and literature, and she maintains that English has had a third person singular pronoun all along, and it’s “they.”

“‘Someone left their coat here’: You’re not confused by that,” said Sneller. “You understand that one person left their coat here. So, my argument is that it’s clear to use ‘they’ and mean it singularly. And not only is it clear, but it’s also historical. You can find examples in Chaucer, in Shakespeare, in Jane Austen, Lord Byron.”

Sneller said that the ban on singular they is elitist: “It’s an unnecessary rule for academics to follow to showcase their grammatical correctness,” she said. “And since I would argue that the point of grammar is to facilitate clarity and inclusiveness and communication, then a rule like the proscription of singular they is completely unnecessary.”

The case for they

On the afternoon of March 4, Sneller made her case for they. The occasion was the annual presentation of English honors theses to the department, and the setting was the H. Henry Meeter Center for Calvin Studies. She was among the group of English honors students presenting on everything from Caliban to the artistry of Thomas Hardy. Her title was Singular They: Confessions of a linguistic subversive, and her medium was a PowerPoint.

"I got really good reactions on the presentation,” she said. “They said it was clear and engaging and a good argument. But it was making waves before I presented.” She laughed, remembering the response of one professor. “She said that I made a good presentation, but she was still against it, which is kind of the general reaction of English professors.”

One English professor thinks Sneller has seen the future. “What she is calling for, I would predict, is what’s going to happen in the language,” Vande Kopple said. “Apparently quite a few grammar books and reference manuals already accept it.”

Vanden Bosch offered his own prediction: “If the change does happen, and it may still happen, it will happen very gradually and with people shouting imprecations.”

Even without that printed corroboration, Sneller is undaunted in her defense of singular they. “I think I have the support of my generation,” she said. “It’s up to us, the new generation of writers and editors, to accept it and use it … The subtext of that is those old fogies have it wrong, but they’re going to die out anyway.” She laughed.

Whatever happens to they, Vande Kopple had high praise for the pronoun’s defender. “She’s smart. She’s quick. She’s brave. She takes on controversial subjects. And she’s remarkably good to work with.”

Post-graduation, Sneller is looking at grad school. First she’s going to take a couple of gap years, maybe in France and maybe involving organic farming. “French was so important to the formation of the English language,” she said.

Try to follow who "they" is in this short, creative offering from English professor James Vanden Bosch:

Singular 'They' in Standard Edited English: An Experiment

From my room one floor above the dark alley, I could hear someone whistling softly and walking below, but they were impossible to see. The three hooligans stepped from the sidewalk into the alley, too, and they were not trying to be friendly.

If someone is being threatened by hooligans, they are your neighbor, and you must help them. If they are a stranger, you have the same obligation as if they were part of your family. At a crucial moment, someone should drop what they are doing and come to their assistance. If they are doing the right thing, they are helping to create a better world.

I heard someone unlocking a chain further down the alley, and then they started the engine of a small motorcycle.  They got on their bike and rode away, leaving the three hooligans far behind them.  Their motorcycle rescued them, allowing me the illusion of being ready to come to their rescue, and I was very glad that they had that motorcycle parked there tonight.