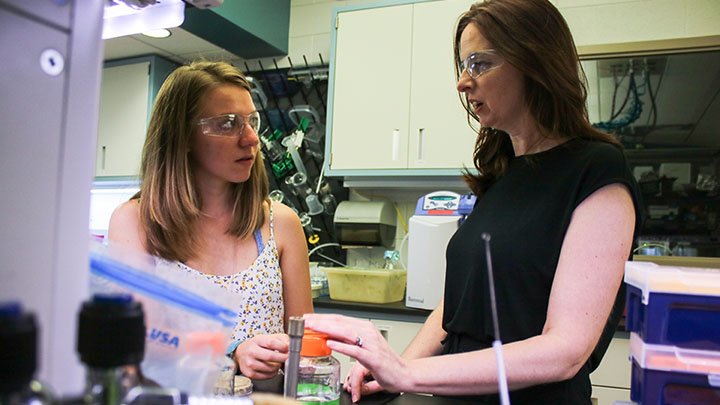 There is a common idiom taught in medical schools that says, “when you hear hoofbeats, look for horses, not zebras.” This means that when doctors see symptoms—or hoofbeats—they should diagnose common illnesses—or horses—and not rare illnesses—or zebras. Rare disease patients have taken on the latter as their mascot and often refer to their advocacy efforts as “showing their stripes.”

Amy Wilstermann and Rachael Baker, the Calvin professors and researchers who started Calvin’s Rare Disease Day event in 2018, look to expand the schedule this time. This year’s event opens with a general session which will host speakers including Dr. Caleb Bupp (Helen DeVos Children’s Hospital), Shannon Bennett (mother of a rare disease patient), Andre Bachmann (Associate Chair for Research at Michigan State University), and a patient panel moderated by Elle Hazlett, a Calvin student with several rare diseases herself. 400 people have now registered for this event, which provides lunch, and breakout sessions follow for healthcare professionals and patients, researchers, and children and educators. The event closes with viewings of research posters and vendor tables from the likes of Be The Match, NORD, and the American Cancer Society, as well as further opportunities for networking.

“We have become quite excited about building community and support around the common experiences of being rare. Each person and each disease is unique and rare, but in reality the experience of being rare is more common than you would think,” said Rachael Baker, PhD and Assistant Professor at Calvin University.

Rare diseases are medical conditions affecting fewer than 200,000 people in the U.S. There are altogether about 7,000 different types of rare diseases, the majority of which are serious and/or life-threatening. Collectively, 30 million Americans have a rare disease (1 in 10 people, or one in every elevator, or four on every bus) and about half of those diagnosed are children. This population is large enough, but in truth, the total number of people affected by rare disease is much greater. When considering the community surrounding these rare disease patients (family, friends, doctors, educators, etc.), it is possible that the majority of the U.S. is affected. Thus, rare diseases are becoming a growingly important public health concern.