Sharing their songs, making a difference 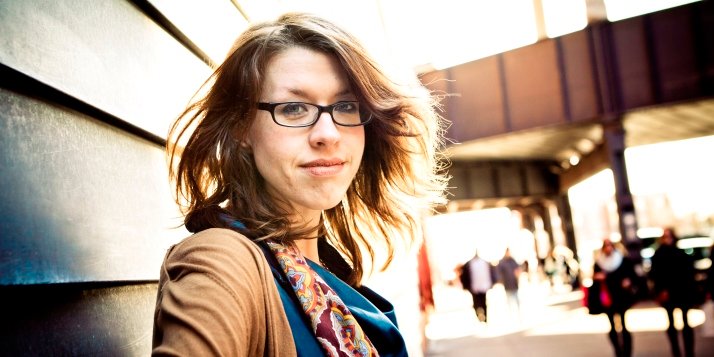 Rachel Zylstra
Rachel Zylstra, pictured here, is one of four alumni singer-songwriters who are participating in a new download project to support Calvin students.

This promotion is no longer active. Thank you for your interest!

Jon Troast '00, Rachel Zylstra '02, Kenny Bekendam '09 and Karisa Wilson '99 may have different musical styles, but they are coming together this holiday season to offer their gifts to you.

The singer-songwriters and Calvin alumni have offered free digital downloads of their albums to supporters of the Calvin Annual Fund*. Visit calvin.edu/go/share to choose your free album download with a qualifying gift, and read on to learn more about each of these talented Calvin grads.

Jon Troast travels the country to bring a firsthand musical experience to his fans—many times in their own living rooms. You may have heard him on Sirius XM radio's The Coffee House or on Prairie Home Companion with Garrison Keillor. Troast is a folksy singer-songwriter with a flair for finding joy in everyday life through acoustic techniques that are known to cause similar joy. Guitars, harmonicas, fiddles—you never know what sweet sounds are coming next in a Jon Troast album. Don’t miss out on your chance to download “Second Story." jontroast.com

Formidable piano chops and a sweet, stark alto mark the appeal of New York-based singer-songwriter Rachel Zylstra. Her wry, wistful lyrics and classically-infused pop might evoke Regina Spektor or Ben Folds, with a hint of Ingrid Michaelson. But perhaps her style would best be described simply as Rachel Zylstra—she makes music that’s truly all her own. Named for both its swooning instrumentation and the things that attach, “Strings” is a little journey of dreaming and growing up, with Zylstra's mitten state origins and East Coast experiences providing the primary backdrop. rachelzylstra.com

Take some layered acoustics, tons of catchy pop hooks, and heart-pounding drum beats, and you have Kenny Bekendam’s debut album, “On My Way.” Bekendam, who was recently nominated for GMA Covenant award, compares his music to a wide range of artists including Keith Urban, John Mayer and James Taylor. “Kenny B,” as he is known by many, attributes much of his musical development to his time at Calvin, both on campus and in the Grand Rapids community. You’ll find a weaving of worship and introspection in "On My Way." kennybekendam.com

“Karisa” [pronounced Ka-REE-sa] means grace, and it is grace with which she sings. Karisa Wilson takes on the style of “Americana” through her musical exploration. She is rooted in West Michigan, though she gathers fans from around the country. With a voice that is akin to Corrine Bailey Rae, Wilson knows her way around a guitar like the folksy Jack Johnson and writes with the transparency of Norah Jones. You'll hear it all when you download her award-winning album, "Little Girl." karisawilson.com