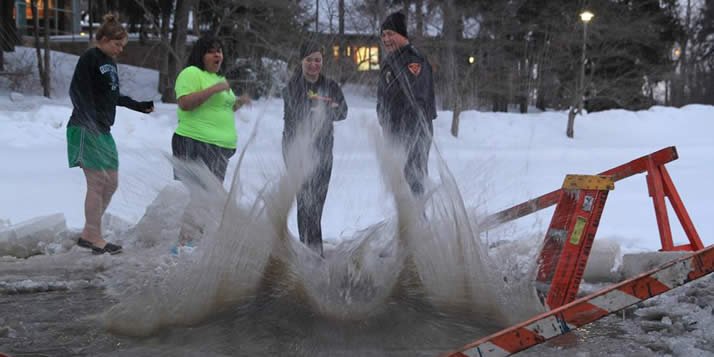 Not even frigid temperatures and wind-chill could keep hundreds of students from willingly submerging themselves in the frozen-over pond next to Calvin Theological Seminary for the 16th annual Sem Pond Jump. But then again, that was the intention.

“If it’s not cold, what’s the point?” said Calvin College chaplain Mary Hulst, who has traditionally been the first to jump into the pond. “Anyone can jump in the water when the water’s warm.”

For many students, last Friday marked the first time that they waited in a long line in wintry conditions to jump into an ice-capped pond. But for Hulst, a seasoned veteran of Calvin’s Sem Pond Jump tradition, it was a familiar experience. She has made the polar plunge for the past five years. And every fall, her participation at the Calvin Carnival prepares her for the jump.

Others, however, were reluctant to take the plunge last Friday because of the cold. But their hesitancy was overcome by a desire to inherit the coveted prize given only to students who participate in the Sem Pond Jump all four years: a golden towel.

Seniors Rachel Otten and Abby VandenAkker agreed that the golden towel was a compelling incentive to jump. But neither was sad to leave the frigid pond behind them.

“No, I don’t mind not doing this ever again,” said VandenAkker while warming up in the seminary after the jump. “Every year I’ve tried to talk myself out of it. But now I have a golden towel. So it was worth it.”

“After you do it [the first] year you have to do it every year,” said Otten. “I think this year was the first time that I seriously considered not doing it because of how cold it has been. I’m never doing it again. But it was totally worth it.”

Forty-eight seniors were eligible to jump last Friday to receive a golden towel. Students studying abroad are allowed to jump in an accessible body of water as a substitute Sem Pond Jump.

The annual Sem Pond Jump has a long history at Calvin. The tradition goes back years before the college officially recognized it 15 years ago, said Emily Dock, associate director of Calvin’s alumni association. More than 2,000 people have jumped at least once at some point in the Sem Pond tradition.

“This is a great, fun, college tradition,” Hulst said. “It’s something that you only do when you’re in college. And I find it to just be a lot of fun to be a part of something like this. Also the pledge we take is very Reformed and it’s really fun to say it.”

Rick Treur, director of annual giving at Calvin, led the Cold Knight Club pledge via megaphone before the jump.

“We promise to leap into the Sem Pond, surrendering ourselves to the icy waters, and embracing our fallenness as creatures,” the pledge began.

The jump, which happened to correspond with Valentine’s Day this year, gave Calvin couples a chance to partake in an unconventional tradition on the holiday.

“My husband will be [jumping] again,” Hulst said. “This will be his third time, so he will get his golden towel next year, so we’re at least going to do it until he gets his golden towel.”

Janelle Dekker, a junior transfer student from Colorado, was glad to have jumped but doesn’t plan to do it again.

“It was a one-time experience,” Dekker said, shivering. “The jump itself really isn’t that awful, it’s the line, waiting out there for like an hour.”

Several freshmen, who experienced the plunge for the first time, expect to make the jump again in the years ahead since they have already endured it once.

“It was definitely worth it,” said freshman Ryan Kelly from Second Bolt. “Yeah I’m definitely [going all four years] now.”

“I’m not upset I did it,” said Paige Brinks. “I say [that I won’t do it again in the future] now, but I’ll probably end up doing it next year anyways.”

“Yeah I will be peer-pressured,” agreed Danielle Newman. 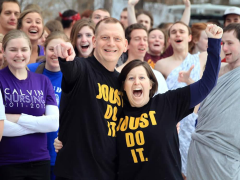 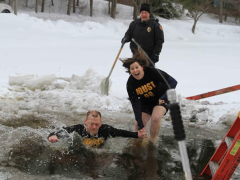 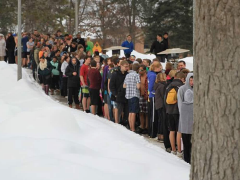