Sea to Sea tour rolls into – and out of – town 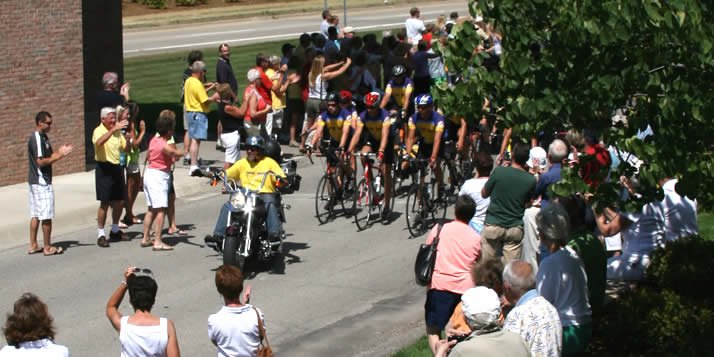 When the Sea to Sea bicycle tour rolled into Grand Rapids on Friday, Aug. 16 it was just the beginning of a busy weekend for the almost 200 cyclists crossing the nation to put an end to poverty.

Besides an official welcoming at Calvin College on Saturday, the riders also took part in a special rally to share their cause with the Grand Rapids community. Held at Fifth Third Ballpark on a sunny afternoon that ordinarily would have sent many participants to the beach, the event drew a crowd of more than 3,000 people.

The rally featured Shane Claiborne, a self-described “activist and recovering sinner” from Philadelphia, who delivered a message about what the church must do to alleviate poverty. Claiborne, particularly popular among college students and young adults, spoke about a new generation of Christians wanting to get over themselves and the American dream and to instead dream a new dream for the world.

In a phone interview with Calvin's web communications coordinator, Allison Graff, Claiborne spoke about how this “new generation” of what he calls “ordinary radicals” can relate to parents and relatives who might not be on the same page regarding issues of social justice and simple living. In other words, how might a Calvin student feeling called to living more radically in terms of community and outreach, talk to his or her parents about vocational choices? To start, it won't be easy, Shane said.

“I think that we sometimes underestimate the challenge that the gospel can pose in our deepest relationships,” he said. “This doesn't exactly sound like Focus on the Family. Jesus challenges the categories of our biological families, but also loves his biological family. He challenges our ultimate allegiances.”

Having said all of this, Shane went on to talk about his own experience sharing his newfound convictions about working with and living among the poor with his own mother.

It starts with humility

“The best way to do all this is to start with a lot of humility and invite parents to come along on the journey to follow Jesus. As I started asking pretty deep questions about these things, I didn't start judging my mom, but I invited her to come with me to visit homeless folks. It challenged her faith and categories and everything else. She's been on the journey with me. The best thing we can do is to stir up the questions in people and invite people into relationships.”

Shane continued, talking about what becoming an “ordinary radical“ could mean for career or vocational choices.

“Just because we encounter Jesus in the poor doesn't mean that there's a cookie cutter radical disciple. There isn't one kind of response that we have to fit into. I always use the example of Zacchaeus, the tax collector who was called by Jesus to give up half of his possessions to the poor, and another who gave all of his possessions to the poor ... . We might just re-think how our gifts effect the jobs we do. The real question is, where do the needs of this world intersect with my gifts and interests?”

Read about the cyclists, why they're riding, track their journey and donate to their cause at the Sea to Sea Web site.

See pictures from the Sea to Sea bike tour's weekend in Grand Rapids.