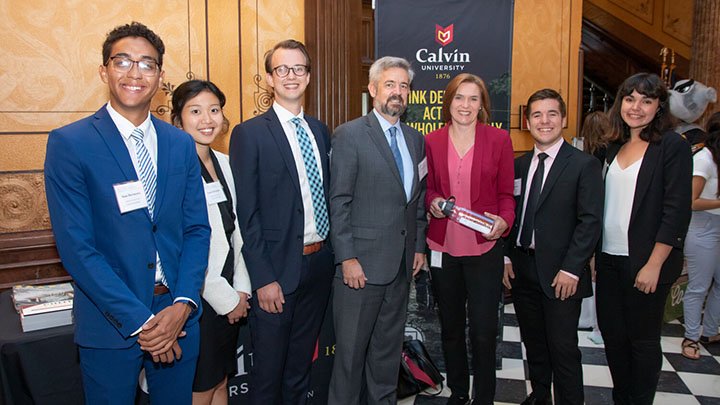 President Michael Le Roy and Calvin students have made multiple trips to the Capitol to speak with legislators this fall.

Lucas Verran aspires to public affairs work in the political realm. Emerson Silvernail sees a future in consulting, lobbying, or fundraising. Both have worked hard over the past three-and-a-half years to discover and develop the necessary skills to carry out this work. But as they neared the final leg of their journey at Calvin, the two seniors ran into an unexpected hurdle.

On October 1, 2019, a line-item veto by Governor Gretchen Whitmer included cutting the $2,400 per year Michigan Tuition Grant (MTG). Verran (political science, organizational communication), and Silvernail (political science, interdisciplinary studies) who were expecting that grant to fund part of their tuition were caught in the crosshairs.

“Having the funding from this grant was expected by everyone,” said Verran. “By the time the veto came out, all scholarships were closed. There was no real option except to try and find $2,400.”

“I’d been getting it [MTG] all four years,” said Silvernail. “If I didn’t get it, I would have to step down as student body president [to devote that time to earning money] or drop out of Calvin entirely my last semester.”

Anxiety ensued … and not just for Verran and Silvernail. Nine hundred Calvin students and 17,000 students across the state were counting on this money as well.

Realizing the high stakes, the Calvin community was called to act. About a week after the cut was made public, Michael Le Roy, president of Calvin University and chair of the board of directors for the Michigan Independent Colleges & Universities (MICU), urged students, faculty, and staff to write the governor and legislators to advocate for the continuation of the grant. Students shared their stories through phone calls, letters, video testimonials, and MICU’s social media campaign.

“I’ve called the governor’s office several times and others have as well,” said Verran.

On Dec. 4, 2019, a group of administrators, faculty, and students showed up in Lansing.

“President Le Roy and two of the presidential fellows coordinated the event. We were bussed to Lansing, given packets, letters, had meetings arranged for us, and President Le Roy was very supportive and transitioned us into the conversations with legislators,” said Silvernail.

The students took the opportunity to advocate not only for themselves, but for the common good.

“It was incredible, I got to speak on the Capitol steps to a group of people there about why I cared about the grant and why it matters,” said Silvernail. “It was a great experience and it further showed me how many this affected and put more faces behind the numbers.”

Being a good neighbor

“I’m impressed with our students’ ability to engage with legislators with grace and truth about how this cut would affect their educational plans. Their ability to thoughtfully convey the potential impact, even as their emotions were right below the surface, was admirable,” said Le Roy. “Perhaps what was most impressive is seeing our students, even those who were not directly affected by this cut, participate in advocacy efforts. It modeled what it means to love thy neighbor as yourself.”

On the evening of Dec. 4, Le Roy received the message that the legislature and the governor had reached a budget agreement that restored the Michigan Tuition Grant and increased it by up to $400.

“It was cool to see Calvin people from very different parts of the institution collaborate on this unified movement,” said Verran. “I can breathe easier.”

“Now that it’s going to be reinstated, I’d like to assume correlation is causation,” said Silvernail. “But regardless, I’m satisfied with the way things happened. I think the 900 Calvin students and thousands across the state who get the Michigan Tuition Grant are just as relieved as I am.”

Michael Le Roy serves as president of Calvin University and chairs the board of directors for Michigan Independent Colleges & Universities. In October 2019, he wrote an opinion piece for Bridge Magazine that highlighted the incredible value the Michigan Tuition Grant provides.