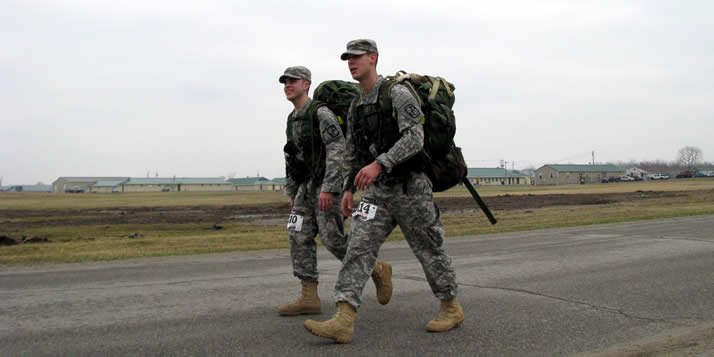 Pursifull is one of 15 Calvin students this year who are enrolled in the college’s ROTC program. He and his fellow cadets are well aware that with the U.S. engaged in wars in both Iraq and Afghanistan, active duty likely is in their future.

Following his 2012 graduation from Calvin as a history major, Ross Pursifull will head toward a different kind of commencement: from stateside military training to possible overseas combat.

Pursifull is one of 15 Calvin students this year who are enrolled in the college’s ROTC program. He and his fellow cadets are well aware that with the U.S. engaged in wars in both Iraq and Afghanistan, active duty likely is in their future.

"Joining a wartime Army means no surprises," said Pursifull. "I joined with the full knowledge I might have to go to war."

Fellow Calvin ROTC cadet Becca Flim is equally pragmatic about what the future might hold for her.

The nationwide ROTC (Reserve Officers' Training Corps) program offers college students, including Calvin students, not only free tuition, but also $600 per semester for books and a $300 per month living stipend that rises to $500 a month by the senior year in college.

After college, students are required to complete mandatory military service, usually eight years as a combination of four years full-time service in the Army followed by the balance in the Individual Ready Reserve (students are commissioned as Second Lieutenants upon college graduation).

Pursifull, a Dearborn, Mich., native, fell in love with Calvin during a campus visit. The chance to go to Calvin for free, courtesy of the U.S. government, made for an easy decision.

"My dad was cool with me joining the military," recalled Pursifull who made his college decision as a high school senior at Lutheran High School Westland. "All he said was that he wanted me to be an officer and to go to college. My grandfather had done it (ROTC) back in the 30s, so I started checking out colleges that had ROTC programs."

Though Pursifull's dad was a Calvin grad, he did not push his son toward Calvin. But after checking out several other Christian colleges with ROTC programs, Ross Pursifull paid a visit to Calvin's campus. The combination of Calvin's academics, faith, proximity to Lake Michigan—and ROTC—sold Pursifull on his dad's alma mater.

"Calvin seemed like a good fit," he said simply, "but if it had not had ROTC, I would not be here."

Some students join after deciding on Calvin

Others among the 15 in the program also came to Calvin because of the ROTC, but some cadets found out about the program after deciding on Calvin.

Ben Byma, a sophomore from Lansing, Ill., and a graduate of Illiana Christian High School, didn't even know Calvin had ROTC when he made his college decision.

"I found out because a guy on my floor last year was in the program and was able to tell me more about it," he said. "I came to Calvin mostly because it was one of the few Christian colleges that had an accredited engineering program. Both of my parents and my grandparents on both sides also attended Calvin, so it was natural for me to consider Calvin as an option. When I came to a Fridays (at Calvin) visit, I was impressed by the opportunities of a large university, but with the size and feel of a small college."

He joined the ROTC program this year after spending much of his freshman year at Calvin working on the paperwork and physical requirements for entry into the program—an option that allows him to combine two interests he had already as a high school student.

"In high school I thought a lot about enlisting in the military," said Byma, one of five engineering majors among the 15 Calvin ROTC students, "but decided it would be better to finish college first. Then when I came to Calvin, I found out you can do both at the same time through ROTC."

Byma knows that ROTC will make for a vastly different post-graduation future than his non-ROTC classmates might have.

"Having an engineering degree, I hope to be put in the combat engineers branch," he said. "I have some desire to go active duty and to provide more service to the country. It would be difficult to be deployed overseas in a hostile environment. Sometimes I wonder if I would be prepared to handle a combat situation, but we are receiving some of the best training in the world from our organization, and I am certain that we will be adequately prepared for anything when our training is complete."

Calvin's ROTC students take basic and advanced courses at Western Michigan University's campus in Grand Rapids, located about a half mile south of the Calvin campus on the East Beltline. As freshmen they take a course called "Preparing for Success as an Army Officer," and as sophomores they take another called "The Role of an Officer." The advanced courses come during a student's junior and senior years and cover such things as leading small, tactical units and transitioning to becoming an officer.

The Calvin students also take part in a variety of training exercises on campus, including one in which they are pushed into Calvin's pool fully clothed and holding rifles, and they participate together three mornings a week,—Mondays, Wednesdays and Fridays from 6 to 7 a.m.—in physical training. They utilize Calvin's new Huizenga Tennis and Track Center where they run, jump, stretch and work out, a regimen that students say creates a keen sense of camaraderie among the Calvin cadets.

"I have gotten to know a lot of great people," said Byma, "and have learned how to rely on them while they rely on me. Sometimes the training kicks our butts, but we always try to enjoy it and do our best at it. Also, the things that we learn about leadership, values and accountability are practical not only in a military setting, but in personal everyday situations."

Across the country some 20,000 ROTC cadets currently are enrolled in colleges and universities, with women making up about 20 percent of that number. Calvin is right at that national average as three women are among this year's corps of 15. Hawthorne, N.J., native and Eastern Christian High School graduate Flim is a junior at Calvin and a sports management major with a business minor. She too planned to attend Calvin before ever knowing there was an ROTC program on campus, and she echoes Byma's thoughts about the camaraderie the ROTC creates among the Calvin students.

"I came to Calvin because I knew that the education was very good here," she said. "Both my parents and a lot of family members have also attended Calvin, as well as many students from Eastern Christian. I like how close knit of a group our ROTC program is. We all get along very well and have fun at the labs, class or any other ROTC programs. I also like that our labs can be so close to Calvin."