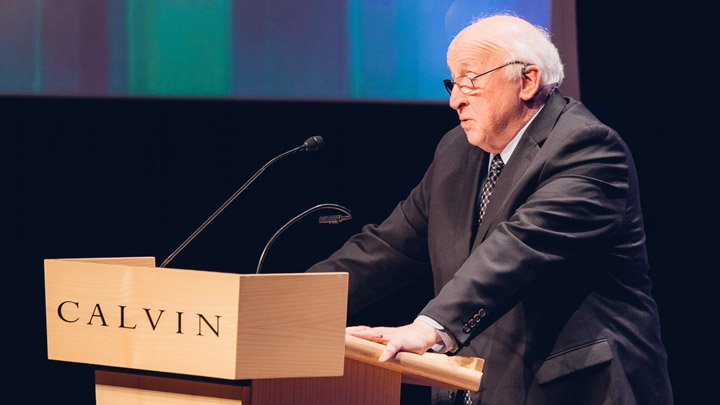 Richard Mouw, a widely-respected theologian and philosopher, is joining the Paul B. Henry Institute for the Study of Christianity and Politics at Calvin University as a senior research fellow. Mouw has served the past 35 years at Fuller Theological Seminary, for two of those decades as its president.

This September, his work takes him back to where his career in academia began: Calvin, where he taught philosophy from 1968 to 1985.

“This new position has personal significance for me since I helped to recruit Paul Henry—the son of Carl Henry, one of Fuller’s founding faculty members—to the Calvin political science department in the early 1970s,” said Mouw, who was part of a legendary philosophy department at Calvin in the 1970s. “We [Paul and I] became good friends, and he and I worked together on several projects. After we both left Calvin, we stayed in touch over the years. Paul was elected in 1985 to Gerald Ford’s old Congressional seat, where Paul served with distinction until his untimely death of brain cancer in 1993. Now, I will be on the staff of a research center established to honor his contributions to the Kingdom.”

Mouw has spent more than five decades in academia and has been long established as a leading thinker of how Christians can engage in politics with civility, something Micah Watson, director of the Henry Institute, says is extremely relevant.

“In our current political and cultural season the mission of the Henry Institute is as important as it has ever been. Drawing on our history and rich tradition we need to continually wrestle with how to understand and apply what our citizenship in the kingdom of God means for our faithful witness as citizens of our earthly cities,” said Watson. “I am convinced that Dr. Mouw’s service as a Henry senior research fellow will contribute to that wrestling and understanding, in profound ways.”

Mouw’s research at Calvin will include two main areas of focus. The first is a book project on a Christian consideration of patriotism, the second is comprised of several research projects within the context of Calvinist political thought. Watson says both of the projects fit within the mission of the Henry Institute to “promote serious reflection on the interplay between Christianity and public life.” And he’s excited for a new generation of faculty and students at Calvin to have greater access to Mouw and his work.

“For his entire career Dr. Mouw has been thinking about what it means to be faithful to Christianity while also giving politics its due,” said Watson. “Our students want to do this well, and it’s hard to find a better guide for them than Dr. Mouw. I am excited for the opportunities that having him here will afford our faculty and students. We will have a resource that no other school will have.”

While the bulk of Mouw’s research will be done remotely, he will spend time on Calvin’s campus periodically throughout the academic year and will meet with students and faculty. He will also deliver a keynote address at the Kuyper Conference and take part in the Henry Symposium, both at Calvin in April of 2021.

About the Henry Institute

The Paul B. Henry Institute for the Study of Christianity & Politics is one of 12 centers and institutes at Calvin University in Grand Rapids, Michigan. The Henry Institute exists to promote serious reflection on the interplay of Christianity and public life. To that end, the institute is dedicated to providing resources for scholarship, encouraging citizen involvement and education, structuring opportunities to disseminate scholarly work, seeking avenues to communicate and promote information about Christianity and public life to the broader public, and to motivating and training future scholars and leaders.