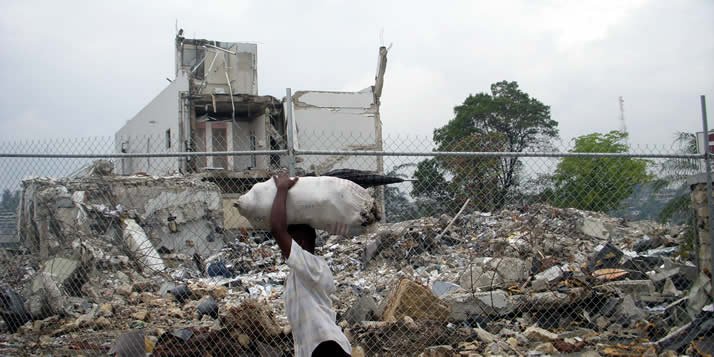 Economics professor Roland Hoksbergen, veteran of earthquake reconstruction in Guatemala in 1976, speaks about the challenges ahead for Haiti.

Calvin professor of economics Roland Hoksbergen has a PhD from the University of Notre Dame in economic development. He also worked for the Christian Reformed World Relief Committee (CRWRC) for a number of years, including a stint doing earthquake reconstruction in Guatemala in 1976. He spoke recently with News & Stories about what faces Haiti in the coming days, weeks, months and years.

What was your first reaction when you heard about the earthquake in Haiti? Was there a sense of déjà vu?

My first reaction was that I hoped it wouldn’t be serious, but for some reason there was fear in my heart that it would be. Personally, I have not lived through anything more serious than some strong tremors, so I had no sense of déjà vu.

But my wife did, big time! And so did her sisters, both of whom now work at Calvin (Nora Koster in Spanish and Nelly Flores in housekeeping). I could see in their faces the memories flooding back, and I could sense their emotional reactions as they watched and remembered. In the 1976 Guatemala earthquake (a 7.5 magnitude), their own house fell down all around them, killing their grandmother, their great grandmother and a young boy who was staying with them. There were 86 people who died in their small town and over 30,000 in all of Guatemala. Like the Haitians we see in the pictures, my in-laws also worked to pull family and friends out of the rubble, walked the streets in search of others and lived in tents for months.  It is a horrible experience to go through.

How does a 7.0 earthquake cause so much death and destruction in Haiti vs the 7.0 in the U.S. that caused fewer than 100 deaths?

The simple answer is poverty, a curse that Haiti has suffered for centuries. There are several subpoints to this. The first is that poor people can’t afford building structures that withstand major quakes. In addition, because big quakes come relatively rarely, and the damage came from Tsunamis instead of structures falling, it’s tempting for poor people to prioritize other needs than expensive buildings.

Second is that poor people often don’t have their own property, so they are not inclined to put much money into an asset like a solid house that they won’t own. Plus, the landlords don’t seem to care that much either.  Third, poor people often end up on the most dangerous land, like unstable hillsides. The fourth reason is that poverty is often associated with a lack of good governance and civil society, a set of problems that can affect the rich as well as the poor. Both of these factors lead to weak building codes and the codes that exist are poorly enforced. This allows builders to “cheat” by putting in less rebar and less cement than is necessary. When the shaking starts, these buildings fall down. Many of Haiti’s structures likely would not have fallen had good building codes been established and enforced.

You spent a year in Guatemala doing earthquake reconstruction. What will the next year look like for Haiti?

The first jobs after a natural disaster are to rescue the victims, to treat those who are hurt, to bury the dead and to provide food, water, shelter and security. This is what is happening in Haiti right now as governments and aid agencies rush to attend to the urgent needs.

This is a difficult, stressful and even dangerous time as it is often difficult to get the assistance organized and delivered to the people who need it most. It’s important for all the organizations involved in helping to coordinate their efforts, a task that is never done perfectly, but that has been improving over years of experience. Once these immediate needs are met, it’s important to re-establish a sense of order, to get the government up and running at local and national levels and restore an air of calm and stability. This will be especially difficult in Haiti because government and order were weak to begin with and the government itself also suffered severe damage in the quake, to its people and to its facilities. That’s one reason there is an expectation of a lengthy foreign presence. Eventually, it will be important to embark on a rebuilding process, not only of buildings, but also of the government, the economy and the whole society. Not least is an effort to rebuild and reshape people’s spiritual lives, to rebuild trust, not only of each other, but also of God and his goodness. Sometimes, strange as it sounds, a disaster like this, painful and horrible as it is, can lead to something like a new beginning. Some people are already talking like this about Haiti.

How have things improved in 2010 in terms of a response to a disaster vs what you were dealing with in 1976?

I think it is without a doubt that disaster response has improved greatly over the last several decades. It used to be that governments and organizations responded haphazardly to disasters and without a lot of preparation or coordination.

But in recent years many NGOs have developed skilled and trained disaster response teams, universities have specialists in disaster response who study the responses that work, and they teach students and organizations what they learn. And organizations have gotten better at working together. So while the response to disasters is never as good as we might like, the responses today are indeed much better than they were in 1976. Back then, it took much longer to learn of the scope of the problem and to mobilize the response teams. One advantage of the digital age is how quickly information can be shared, how widespread it is, and how it can push many different groups into action. Regular people too are much more quickly informed and much more able to send in supportive donations to the organizations of their choice, via cell phone texting for example.  The organizations thus have a much quicker sense of what kind of resources they will have to work with.

The CRWRC, your employer before Calvin, has been in Haiti since 1975. How critical are NGOs like the CRWRC to Haiti's future?

This is a controversial topic, because some people argue that the work of NGOs is absolutely essential, and others argue that there are so many of them in Haiti that they create dependency and keep Haitians from taking charge of their own lives.

My own view is that they are both right, and that’s because not all NGOs are the same. Some, like CRWRC in my estimation, work with people as partners and don’t do anything unless there is a lot of Haitian input, investment, action and ownership. Such organizations can make great contributions to education, health, community organization and solidarity, business development, improved agriculture and the development of self-esteem and spiritual purpose. But there are others that take a more paternalistic view and are much more likely to give things away without expecting much in return. Such practices are easy to fall into where the needs are so great, but in the end, they can also be corrupting. In addition and sadly, some NGOs are themselves corrupt, and generally exist to try to get money out of well-meaning donors. In the end, NGOs have a vital role to play in Haiti’s development, but Haiti will itself have to find ways to filter out the troublesome ones. Being able to do this wisely will be a big step for Haiti.

What role can the U.S. play in reconstruction?

At the present time the U.S. government is playing a major role in helping with rescue operations, clearing of rubble, restoring a sense of security, providing the support of military medical personnel and facilities and managing the arrival and distribution of many relief supplies.

These are all very important contributions. As the immediate disaster comes under some control, the U.S. can help by providing financial assistance to rebuild vital infrastructure (like roads, harbors, electricity systems), to get the educational and health systems up and running again (hopefully in a new and improved form), and to promote business investment home construction. In addition to providing financial assistance, the U.S. can also help with training and technical assistance in all of these areas, as well as in areas of governance.  Unfortunately, all these things can be done well or poorly, one very important issue being the inclusion of Haitians in every part of the process. The U.S. can also help with trade and immigration policies that help give Haiti a leg up into the future. It would be great if these challenges could be faced without a lot of internal U.S. political maneuvering getting in the way, but that’s a very big challenge for us in the U.S. right now.

What are the critical steps to be taken now to ensure Haiti's long-term survival and success?

How can, or how does, Calvin's international development studies major provide human resources for solutions to situations like Haiti.

Calvin’s IDS program takes more of a long and broad view of human development. Disaster response is a very technical field that people can and should study at a master’s level.

Some people in large organizations are able to gain experience from seasoned professionals in the field. What our program does is to help students understand why poverty persists in countries like Haiti and results in such devastation when a natural disaster strikes. More than that, IDS students work to understand the ways in which poverty can be overcome and countries like Haiti can prepare for future disasters in such a way that they won’t do nearly the damage that this one did. And students are gaining skills in intercultural communication, community development and the workings of national and international institutions and policies, all of which will help make them effective participants in the work of bringing countries like Haiti to a new and better future. What they are learning now will prepare them to become leaders not only in such specific and important areas as disaster response, but also in the long-term strategies for effective human development. 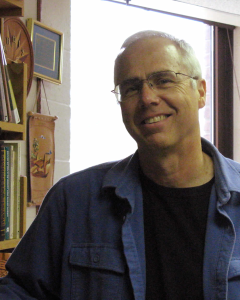 Read a profile of Roland Hoksbergen.

Read about the upcoming 2010 Faith and International Development Conference at Calvin.

See video highlights from the 2009 Faith and International Development Conference.