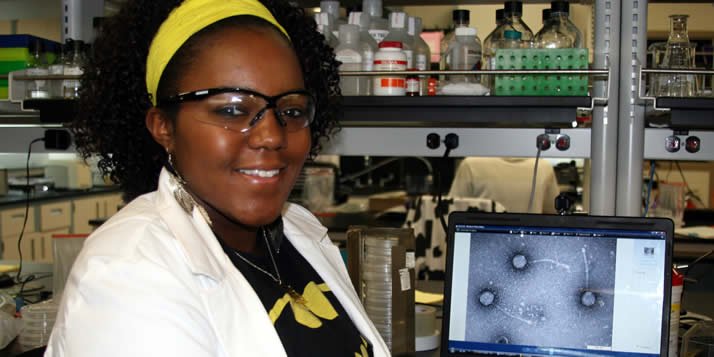 The first time she saw Anaya, Calvin junior Ariangela Davis was sick with the flu—so sick, in fact, that the now-20-year-old biotechnology major was under quarantine. Thus it was that Davis went home to Portage, Ind., to recuperate, while Anaya, the 200-nanometers-tiny bacteriophage (“phage”) she had discovered in biology class traveled in a petri dish to a laboratory to be viewed for the first time by electron microscopy. A classmate would make the pitch for Davis’ phage to be one of the two chosen out of 20—one phage from every student in the class—for genomic sequencing.

“I was at home, feeling terrible and thinking that it wasn’t going to turn out right,” Davis said.

Anaya was chosen, and biology professor John Wertz sent Davis the first electron microscope images of her phage. It looked, she said, like “some sort of space-landing-ship thing.” Davis was struck by the gravity, the realness of her work: “It looked like a picture you would see in a textbook, but it was something I had found,” she said.

Eventually, Anaya (Hebrew for “God answered”) was shipped off to another lab at the Howard Hughes Medical Institute (HHMI) University of Pittsburgh, where the little phage was discovered to be infectious toward tuberculosis, a finding that has big implications for the treatment of that disease.

And Davis is still studying phage, the virus that infect bacteria. Composed merely of DNA and protein, essentially colorless and so small they are only visible through an electron microscope, phage have the ability to inject the tens of thousands of base pairs of their DNA into a bacterium. “Their mission is to replicate themselves,” said Davis who is studying how phage interact with the good and bad bacteria in the intestines: “We think that phage play a huge role in keeping us healthy when it comes to digestive issues,” she said. Her project with Wertz is titled “Investigating the Role of Bacteriophage in Human Health and Disease.”

Davis spends her summer workdays in the newly opened Integrated Science Research Experimental Laboratory (ISRx), working with phage that come from the intestines of termites. Of the day Wertz brought her the first research subjects, via a fragment of termite-infested cardboard, she said: “I’m not a huge bug person, so that was a big growing-up day for me.”

Her work involves harvesting the bacteria from the insects and isolating each bacterial colony in its own dish. “We know that sickness happens when there is an imbalance of bacteria: not enough of one or too much of another. But we also know there are phage there,” Davis said.

She makes the phage “pop out” by irritating the bacteria with antibiotics. “We want to see how they will work on each other … When a bacterium is infected by a phage, but not killed by it, that bacteria is protected from infection by another phage. It’s kind of like a vaccine,” she said: “We know that phage kill bacteria … “Maybe they could be a better way to kill infections than the antibiotics currently available to us.” Antibiotics typically wipe out both good and bad bacteria in fighting infection, said Davis.

The goal of phage research is to bio-engineer a phage that would target only the bad bacteria, said biology professor Randy DeJong, and phage research has a long history: “Before antibiotics were discovered, phage were the biggest hope for killing bacteria.”

DeJong is busy in the ISRx with his own phage research, a project titled “Impact of bacteriophage on the symbiotic communities of invertebrates.” Along with junior biology major Daniella Hartwig, he is researching the phage found in mosquitoes.

“I find it very weird, to be honest, to make a point of going out and catching mosquitoes,” said Hartwig, who suctions the skeeters off of her own arms and legs by inhaling through an apparatus. “The whole letting-it-land-without-brushing-it-off-and-squishing-it was weird,” she confessed.

Her research technique is modeled on that of Davis: extracting the insect guts, combining them with solution and studying the resulting bacterial colonies to see how the phage are behaving. “Maybe we could find a phage that could be modified to interfere with a mosquito’s ability to be infected with malaria,” DeJong said. (The project also includes research into the phage in bedbugs and snails.)

Both phage projects grew out of a two-year old research-based biology class for incoming students with a scientific leaning. The class, funded by a three-year Howard Hughes Medical Institute (HHMI) grant, makes Calvin one of 24 colleges and universities in the institute’s Science Education Alliance. Each of these schools studies phages to contribute to HHMI’s National Genomics Research Initiative.

“It’s really shifted my focus on my research too,” Wertz said about the class. “Now, not only have students been trained on phage research, but so have we."

It was in the first section of the research class, in 2009, that Davis discovered Anaya. It was also that class that made her a researcher. She originally majored in psychology and hoped to find a scientific route into that field. Then she got the letter from Wertz and DeJong, offering her a chance at one of 20 slots in the new class. She applied, was accepted and fell in love with research.

“She is absolutely, positively meticulous,” Wertz said of Davis. “She’s a great listener, and she thinks beyond what’s right in front of her.”

Davis, who hopes to go on to graduate school in either genetics or microbiology, enjoys working independently. She also enjoys working in the ISRx, (which opened in May), surrounded by student researchers from several scientific disciplines. “If you need something from someone, there’s always someone nearby,” she said.

Hartwig, who plans a career in medicine, also likes the lab’s collaborative atmosphere: “It’s fun to go around and see what everyone else is doing,” she said, “and I love the laid-back feeling of summer, where you do the best you can, you work, and if you can find out what you did wrong, you improve it next time,” she said. Hartwig finds the tiny bacteriophage inspiring: “It’s definitely given me an awe of what God’s created,” she said.

And Davis is gratified that Anaya is still inspiring other researchers. Several independent studies and whole biology classes have been devoted to studying the little phage she found two years ago. “It’s cool that something so small could have such an impact,” she said. 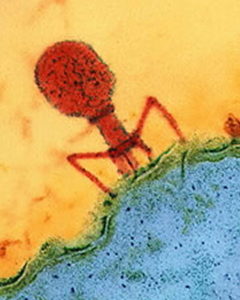 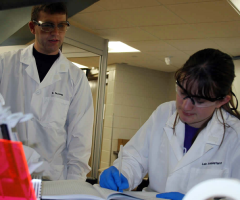 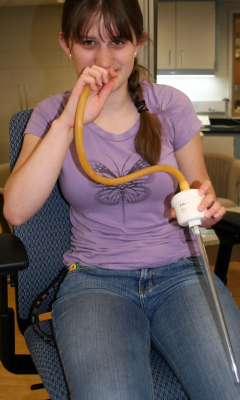 Daniella showing off her mosquito-catching technique 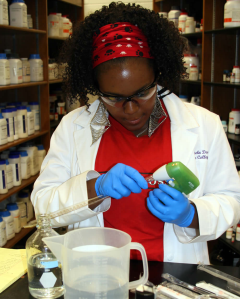 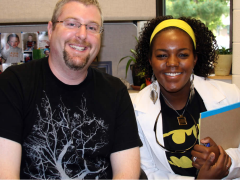