Researching how berberine works on diabetes 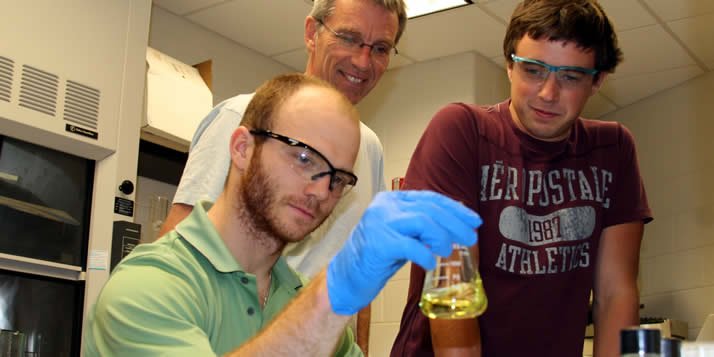 Larry Louters and four student researchers are studying how a dietary supplement works on diabetes.

This summer chemistry professor Larry Louters is working with a quartet of students on diabetes research, a topic he has pursued for a dozen years now. Louters is specifically looking at the effect of a dietary supplement called berberine, which has long been used in China for stomach problems and diabetes. According to Chinese doctors, patients with those conditions can better manage their diabetes when they take berberine.

His research began a couple of years ago when Louters stumbled upon a paper on berberine authored by Chinese scientists and decided to make berberine part of his long-established diabetes research—and bring students into the process. This past spring, the team published a paper based on their findings titled "Berberine acutely activates the glucose transport activity of GLUT1."

The title comes from the specific niche of diabetes research that Louters and his students pursue. While most diabetes research at a national level focuses on something called glucose transporter type 4, or GLUT4—a protein that is an insulin-regulated glucose transporter—Louters and his cadre of students have focused their research on GLUT1, a protein that facilitates the transport of glucose, but was not thought to be important to the disease of diabetes.

One of a few

Louters' lab is one of a handful of labs in the world— he knows of one other in London and two others in the U.S.—that has looked carefully at GLUT1 and diabetes. Together, these labs have been able to demonstrate a greater potential connection between GLUT1 and diabetes than previously thought. And Calvin students have been at the heart of the work.

"We have no illusions that we are going to win a Nobel Prize," said Louters, "but this is good research that is happening here at Calvin, peer-reviewed research that is making a difference. For our students to be involved in this, to be listed as authors on published papers in respected journals, is a great opportunity. It's what I love about doing research with Calvin students."

The value of process

Louters added that the research process is, he believes, as valuable to the students as what is discovered. His students agree.

"Even the simplest discoveries take extensive hours to figure out," said Dave Kuiper, a senior biochemistry and psychology major from Aylmer, Ont., who hopes to be a physician. Fellow researcher Matt Salie concurs.

"The research process is very slow and time-consuming," said Salie, a native of Bellflower, Calif. "No matter how I planned things out, it always seemed that my research consumed more time than I expected it to, or I would run into a barrier that I needed to fix in order to move on in my research. I never understood why it took so long for scientists to find cures and drugs to fight diseases, but now I have a much better understanding of that."

Salie said the experience he gained as an undergraduate was critical to his acceptance to graduate school:

"Each class that I took also had a lab attached to it, which gave me experience in learning many lab techniques from both biology and chemistry,” he said. “Many of the (graduate) schools that interviewed me were impressed with the number of techniques that I had learned as an undergrad." (Salie is heading off to graduate school this fall at the University of Missouri.)

Summer research has shown him that science is messy, said Dan Oram, a senior biology major from Cheboygan, Mich. "Experiments can give conflicting data, published scientific papers can contradict each other,” said Oram, who minors in music and is a classical pianist. “Beneath it all is a delicate process that has as much to do with personal touch and judgment as it has to do with standardization and quantification."

Still, said Oram, who hopes to someday be a family physician, summer research is a wonderful job: "I really enjoy the intellectual challenge of research; I also enjoy spending time with the three other Calvin students in my lab."

One of those students, Jared Scripture, a senior biochemistry and psychology major from Kalamazoo, Mich., also likes the lab camaraderie. Scripture appreciates the ways in which Louters makes his researchers feel comfortable.

"He explains things in a way that's easy to understand, and he is pretty patient if we don't understand things the first time around," said Scripture. "He's great at keeping us busy and letting us know what the lab needs to do next. Summer research is great. I like how hands-on it is and how much freedom we have to give input and ideas.”

Recently Louters took a trip to Nashville and stopped in at Vanderbilt University to visit with some fellow biochemists. One was his former research advisor who informed him that work Louters had done decades ago as a graduate student at the University of Iowa had been rediscovered and was now the basis for a thriving new technology. Louters also learned that one of his former students—now studying at Vanderbilt—was among the best graduate students there because of the research he had done while at Calvin.

Both stories, said Louters, were affirmation of the work he does every summer with Calvin students.

"The student research we do at Calvin gets our students ready for graduate school and medical school," said Louters. "We have always known that, but when someone at Vanderbilt—where we have not sent a lot of graduate students—tells you that, it's gratifying. The other thing about our summer research programs is that often we are doing some pretty basic research, but we don't know how, down the road, it will end up being used. Like my research at Iowa, what we're doing here could be of benefit to others decades later. So that's encouraging."

There's another benefit to lab work said Salie, who envisions a future career in research: "My summer research experience proved to me that I could survive a long work week in the lab and still enjoy what I was doing, giving me enough confidence that I could probably survive in graduate school." 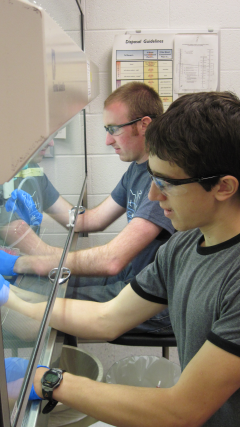 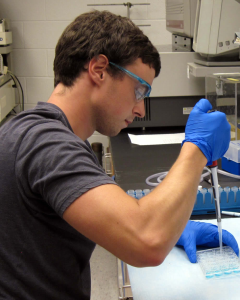 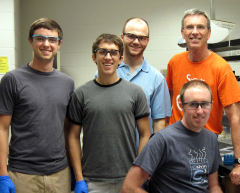