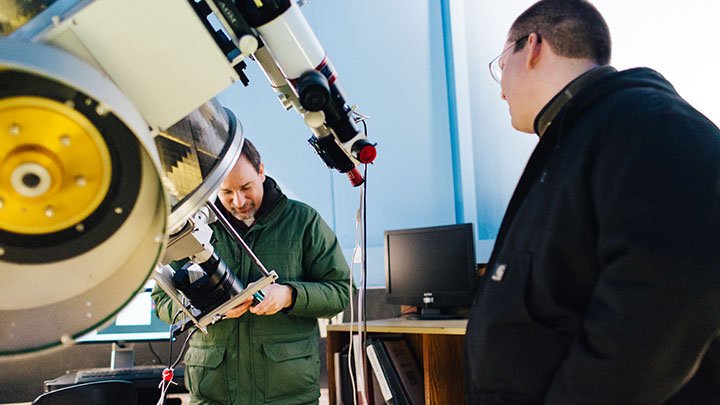 A Calvin College student's curiosity led to a discovery that has the world's attention.

On Friday, January 6, the American Astronomical Society held a press conference during their annual meetings in Grapevine, Texas. There, Calvin College professor of astronomy Larry Molnar shared how the prediction he made in 2015 of a binary star merging in the near future is progressing from theory to reality.

“This is the first ever prediction of an explosion. We don’t know yet whether it is right or wrong, but it’s the first time we can make such a prediction," said Molnar at the press conference. "A very dramatic change in the sky as anyone can see it, you won’t need a telescope in 2023 to tell me if I was wrong or if I was right."

Within hours of Molnar’s press conference, media from around the world had taken notice of the remarkable prediction. The news found its way through the scientific community through publications like Sky & Telescope, Astronomy Magazine and Popular Science, but also more mainstream outlets like National Geographic, The Washington Post, Forbes and USA Today. The news also quickly spread overseas being picked up by publications like The Telegraph (UK), RT (Russia) and The Indian Express (India).

And this discovery that has caught the world's attention started with a student's curiosity. The ABC and FOX affiliates in West Michigan highlighted 2014 Calvin grad Daniel Van Noord's significant role in the project.

The News and Stories article on Calvin's website provides more background information on how the discovery was made.

Calvin communication arts and sciences professor Sam Smartt is producing a documentary related to the discovery. Watch the trailer.

And a more complete list of local, national and international coverage of the discovery is available on the physics department's Facebook page.