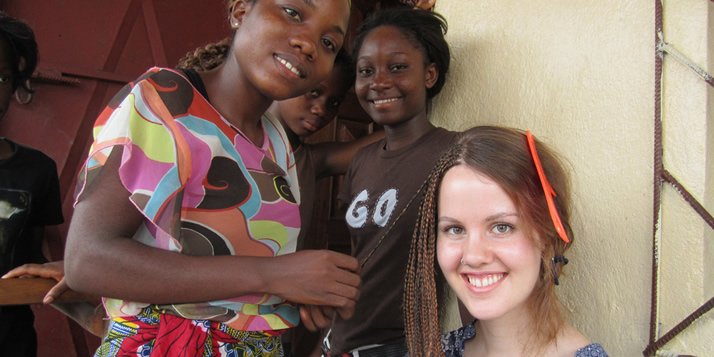 All of the graduates wore dresses and suits cut from the same blue fabric, and they marched in singing, “We’ve Come This Far by Faith” in Liberianaccented English. “It was in call and response,” Calvin social work professor Joe Kuilema recalled. “One of the leaders would call out, and they would respond.” Kuilema was describing the Commencement ceremony in Monrovia, Liberia, where 20 students from Mother Patern College of Health Sciences received their bachelor of social work (BSW) degrees: the first BSW degrees ever offered by the college—the first BSW degrees ever offered in that country.

Kuilema was in Monrovia with fellow Calvin social work professors Rachel Venema and Kristen Admiraal to watch their students graduate. The three represented a collaboration between Calvin College faculty, faculty from Kuyper College and Mother Patern to found Liberia’s first social work program, an effort that’s taken the group five years. “We would say the same thing,” Kuilema said, reflecting on the ceremony, “that we’ve come this far in the partnership by faith.”

The Liberia social work program was the inspiration of former Calvin staffer Bob Reed, who was working during this decade in that country through the Christian Reformed World Relief Committee. Liberia was savaged by back-to-back civil wars: from 1989 through 1996 and from 1999 through 2003.

During those 11 years, soldiers invaded villages and kidnapped children, forcibly converting them to soldiers. They also raped and brutalized women and killed families. In the aftermath of all the conflict, Liberia was left with the problems of rebuilding infrastructure, developing workable social policy and managing the re-integration of child soldiers into society, as well as the many problems that come with HIV/AIDS.

“The place is decimated. At least it was in 2006,” said Calvin sociology professor Cheryl Brandsen, who, at Reed’s request, first traveled to the country that year. She saw the bombed-out luxury resorts that lined the oceanfront. She saw the former child soldiers now driving motorcycle taxis to make money. “I had never seen so much ruin, so much poverty. There were no paved roads, no running water, no stoplights. All of the infrastructure had been destroyed …,” she said. “It’s not at all unusual for people walking down the street to see someone who killed their family.”

“A number of the students were already working in what we call social work jobs, but they had absolutely no training to do that, and they were floundering,” Brandsen said.

The mission comes together

On that first trip, Brandsen visited Mother Patern, along with Reed, Calvin social work professor Beryl Hugen and Kuyper College social work professor Judi Meerman. “During that visit, everyone present agreed that starting a social work program in Liberia made good sense,” Brandsen said. “We put in place a mission statement for the program and worked on overall program goals and objectives.”

The group worked with Joe Kpukuyou, a Mother Patern social work professor, and Sr. Barbara Brilliant, the dean of the college, to create a structure for the curriculum. They also visited potential social work internship sites, both in the city and in rural areas, and met with a number of government officials, “all of whom were very eager to see a social work program put in place,” Brandsen said.

The new curriculum for Mother Patern, much of which was written via e-mail, is loosely based on Calvin’s social work curriculum. “There was a tendency for the faculty at Mother Patern to copy what we did here, and we had to resist the impulse to just put our structure into place, which would have been far easier,” Brandsen said. “Instead, we all tried hard to think about how the larger principles of social work translated into a Liberian context—and especially their unique and horrific experiences with the wars.” The resulting program was designed to help social workers deal with trauma issues and to facilitate community development.

The first cohort of around 20 BSW students enrolled at Mother Patern in the fall of 2007. In the four years since, Kpukuyou has taught them throughout the academic year and Calvin faculty—Brandsen, Hugen, Kuilema, Admiraal, Venema and anthropology professor Mwenda Ntarangwi—have taken turns teaching them during the summers. (Meerman and Kuyper social work professor Gregg Scott have also taught in the program.) The enterprise, including textbooks, computers, a van and other supplies, is partially funded by a grant from the DeVos Family Foundation.

In January 2010, Kuilema and Venema brought the first Calvin interim class to Mother Patern. The Calvin students who went on the Liberia interim experienced some surprises in the classroom.

“One of the things that stuck out for them was the lively spirit of debate,” Kuilema said. “The Mother Patern students loved to engage in heated discussions of policy and practice, both inside and outside of the classroom.” The Calvin students tended to read this outspokenness as animosity, he said, and they found it intimidating: “By the end of the class, however, I think they understood it more for what it is: a passion for learning and a really expressive oral tradition of learning.”

The classroom atmosphere was one of the things Admiraal enjoyed most about teaching at Mother Patern. “It was difficult to get through the course content because we’d have these great discussions about end-of-life issues or whether it was appropriate to pray for a client,” she said.

Her classmates were the best thing about the interim, said social work grad Jules Postema ’10: “I loved hearing their stories, visiting their homes, sharing meals, attending their churches and laughing about the strangeness of both of our cultures.”

The Calvin faculty who taught at Mother Patern also found in the Liberian students a strong passion for improving their country. Kuilema recalled what happened when he assigned his Mother Patern class to perform community assessments—identifying the strengths, weaknesses and opportunities for development in their individual neighborhoods. It is an assignment he regularly gives his students at Calvin, and they always turn in academic reports.

The Liberians took a different approach. “They came back and said, ‘Well, we got 400 people together, and we’re going to build a community latrine this weekend,’” Kuilema recalled, adding that the Mother Patern students respond the same way every time he gives that assignment: “Students return with stories of how they organized a community meeting and raised money for the concrete for a new, improved pit latrine. When Prof. Ntarangwi taught the class, one of the students started a community agricultural initiative for persons living with HIV/AIDS.”

Kuilema believes this action-oriented response signals a different approach to education. “For many of our students at Mother Patern, there was no gap between learning and doing. Knowledge was for application, and knowledge was also not just for personal improvement. An individual’s learning was often seen as being for the benefit of the wider community, not just themselves.”

The Calvin faculty who taught at Mother Patern were impressed repeatedly by the resiliency of the Liberian students. “The Liberian people are amazing,” Brandsen said. Most of the students had stories to tell about family members who had been raped, murdered or coerced into the army, she said: “Still, the Liberians are resilient, strong, proud and hopeful people, focused on the future and not dwelling on the past.”

The Calvin professors are gratified to see their Liberian students become professionally trained social workers. Admiraal shared about one Mother Patern student who, equipped with a bachelor’s in philosophy and an associate’s degree in social work, was already serving as the director of a home for at-risk youths: “My dream has been to become a professional social worker,” said David Konneh. “Even with years of experience, I felt a bit incompetent professionally … . With the earning of a bachelor’s degree in social work, I feel professionally competent and it has actually enhanced my performance … . Now I feel comfortable serving on various child protection committees.”

As the country’s first professional social workers, the Mother Patern students are likely to have a significant effect on the rebuilding of Liberia’s many institutions. “They will identify the best practices in their nation,” said Admiraal. “They will be the experts on not only the social problems in their country but also the best approaches and solutions to address these social problems.”

While they are rebuilding their country, the Mother Patern students will also be passing their knowledge along. “The intention was always to hand it over to Liberians. It’s their culture. It’s their context,” said Kuilema.

When Venema and Kuilema return this year, they will co-teach the current cohort with those of their former students who have been selected as teachers. Gradually, the responsibility for maintaining the program will be assumed by Mother Patern. “Being involved in work of this magnitude is very humbling,” Venema said. “In some ways, I feel like I am just there to witness the work already being done.”

Bob Reed didn’t live to attend the Commencement ceremonies for the social work program he helped to create. Reed died March 20, 2010, in Ghana, West Africa, after a sudden illness. A counselor in Calvin’s Broene Counseling Center for 15 years, he also founded the Madison Square counseling ministry in Grand Rapids in 2002.

Bob, his wife, Renita, and children, Hannah and Noah, moved to West Africa to work with the Christian Reformed Relief Committee on issues of peace building and conflict resolution, justice and advocacy, and mental health issues.

“We—the Calvin and Kuyper people as well as the faculty and students at Mother Patern—like so many others, were shocked and saddened by Bob’s death,” said Calvin sociology professor Cheryl Brandsen. “His energy and passion for social work and for the welfare of the Liberian people motivated his interest in all of this. We so wish he could have been present at the graduation to see what he started.”

At the Commencement ceremony for the Mother Patern students, a moment of silence was observed for Reed.