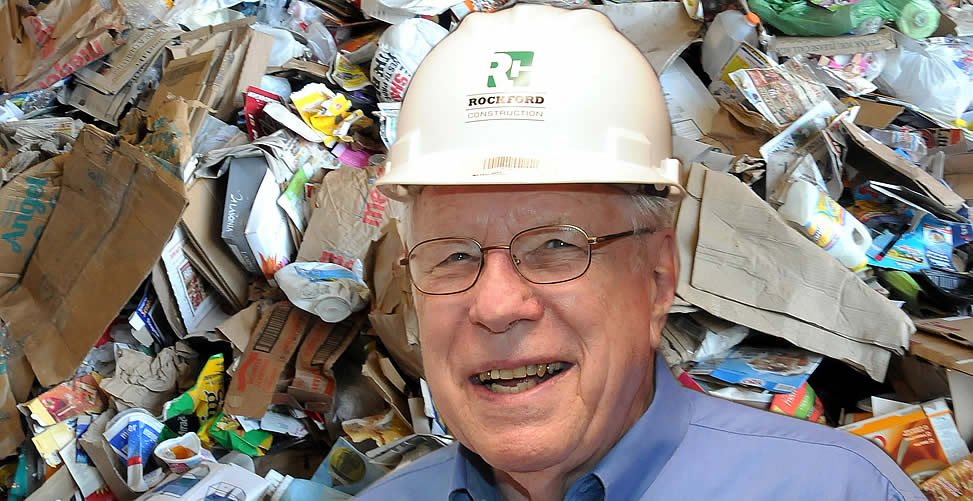 A 55-gallon drum, an old washing machine motor and a few chains assembled in a college engineering lab at a cost of $25: the humble beginnings of recycling in Grand Rapids.

A combination of conveyors, shakers, blowers and magnets that can process 18 tons of recyclables an hour or 108 tons per day at a state-of-the-art $12 million facility: the recently opened Kent County Recycling and Education Center in downtown Grand Rapids.

For Calvin engineering professor emeritus James Bosscher and a few of his students, it would have been hard to imagine this evolution 38 years ago.

"I’m very thankful about the way it all turned out,” said Bosscher of Kent County’s recycling program.“ It just always seemed to me this is what we should be doing.”

It was Bosscher who in 1972 urged his students to design the prototype glass smasher (described above, pictured at right) to be used for community projects. Just the previous year, Bosscher had organized a glass drive to raise funds for a local charity, but the manual glass smashing limited volume and profitability.

“From there it set me onto an idea: For the next three years, the engineering design students designed recycling machinery,” said Bosscher.

The can crusher was next, followed by the plastic bottle shredder and finally a trailer that could transport the equipment for on-the-spot recycling at the same time as garbage collection—a mini recycling center on wheels.

While Bosscher was overseeing his senior engineering students and their projects, a parallel idea was hatched: to develop and test the viability of a recycling business to further utilize the equipment.

“I always look upon what I do as trying to teach young technologists by giving them a sense of responsibility,” said Bosscher. “By starting a recycling operation, we were trying to live out a concern for creation care.”

So in the summer of 1973, Recycle Unlimited, with Bosscher as co-director, was born. It provided 30 pick-up sites for glass bottles, metal cans and newspapers; employed inner-city youths; and developed equipment and procedures for sharing with other recyclers.

David Genzink ’72—one of the designers of the glass smasher—was hired as the first manager. “I remember Jim doing a lot to sensitize us to the environment,” said Genzink. “He created the awareness about the possibility of recycling, but it seemed like there was no way to do it until Recycle Unlimited started.”

For 17 years, Recycle Unlimited existed, operating out of a small shed-like building downtown, always with the hope that it would grow into something larger.

“Our goal was always for the government to take it over,” said Genzink. “When the Michigan bottle bill went through [in 1976] we were pushing for that even though it greatly cut into volume for us.”

In fact, as much as Recycle Unlimited was about reusing materials, it was just as much or more about raising the level of consciousness about recycling. “I think we saw that old trailer and our decrepit, recycled beer trucks [which hauled the recyclables] as ‘witnessing technology,’” said Bosscher. “We wanted to get the publicity out to conscientious people, with the idea that in due time municipalities and counties could take this over.”

Which is exactly what happened with the help of alumni like Vernon Ehlers ’55, Beth Decker Bandstra ’70, Jerry Kooiman ’84 and Bill Byl ’74, who all at various times served as chairperson for the Kent County Board and Department of Public Works.

The board supported not only curbside recycling and the building of a recycling center, but also the construction of a waste-to-energy plant (opened in 1990), which effectively reduces solid waste volume by 90 percent and produces useable energy in the form of electricity.

Byl, who chaired the board in the late 1980s when the waste-to-energy plant was approved and now serves as Kent County drain commissioner, was inspired by Bosscher as a student: “This is the kind of thing that he was always getting at; ‘look for work that matters’ is what he emphasized.”

Other students remember similar words from Bosscher, including Cynthia Gelder Andela ’80 and her husband, James Andela ex’77. “His commitment to environmentally and socially responsible projects sticks with you,” said Cynthia, president of Andela Products Ltd., located in Richfield Springs, N.Y. Andela Products generates products designed, manufactured and marketed directly to the recycling industry. Its glass pulverizer was their first product designed for the glass recycling industry. A wide range of equipment and systems for the glass and other recycling markets followed.

“Our technology was born out of thinking and reminiscing about projects we did at Calvin,” said Cynthia. With that technology the Andelas can produce a product that is marketable—sand or a sand-like substance, which can be used in landscaping and as a sand substitute.

“One of the biggest benefits about our business is that you know you are doing the right thing,” said Cynthia. “You’re doing something God would want you to do, and that is a real positive thing for this world. That’s the inspiration we got pretty directly from Dr. Bosscher’s class, and years later it’s come full circle.”

In fact, the Andela glass pulverizer is one of the high-tech pieces of machinery that is operating on the floor of the new Kent County Recycling and Education Center, just below the James P. Bosscher Educational Center, a 5,000-square-foot education area that offers two public meeting and classroom areas and a 125-foot-long viewing platform to allow safe overhead viewing of the machinery processing recyclables.

“What we found out at our facility was that we were inundated by requests from schools for tours,” said Dennis Kmiecik, Kent County’s solid waste division director. “A lot of schools have added environmental classes to their curriculum, and we wanted to make sure that we had the capabilities to offer a nice tour. It made sense to name it after Jim Bosscher because of his history of recycling in Grand Rapids.”

Cynthia Andela couldn’t agree more: “He was the pioneer before recycling was the thing to do; his name definitely belongs on that room.”

And every now and then Bosscher returns to his pioneer days: It’s not unusual to find him outside his housing complex baling cardboard and toting it downtown by the car full to a local recycler. Explained Bosscher: Cardboard recycling "got cut out of the budget because someone thought it was too expensive to have a company pick it up." 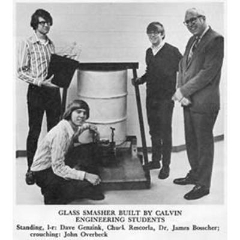 Grand Rapids Press article about James Bosscher: Forefather of Kent County' recycling efforts getting his due

Other local news coverage of the opening of the new recycling and education center: