Reasoning with the best in the business 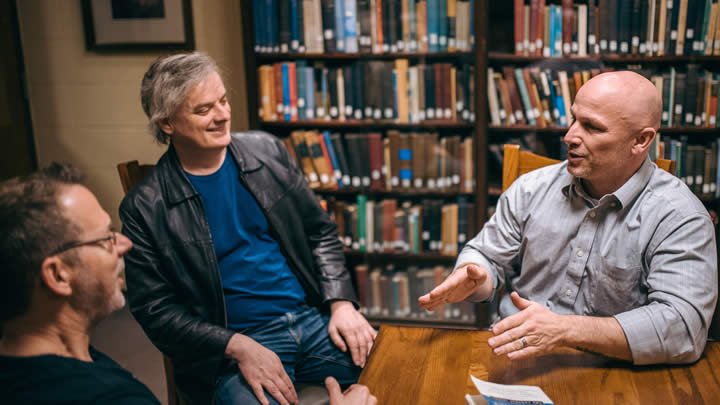 Paul Manata (right), Kevin Corcoran (left) and David Chalmers engage in a discussion during the workshop.

These words kicked off the recent workshop called the Conscious Persons Project, held at Calvin April 23-25. Organized by Calvin College professor of philosophy Kevin Corcoran and Eric LaRock, a philosophy professor at Oakland University, the workshop was intended to explore views “on the nature of consciousness and its relation to that roughly three-pound mass of pinkish gray matter between our ears,” as Corcoran explained.

Exploring with the best

“It’s not unusual for this to happen at a big research university,” said Corcoran. “But it’s a pretty big deal for a small college like Calvin to attract an event like this.”

“There are brilliant women in the various areas of analytic philosophy, so it just seems right that they be represented at our own workshop. And the junior faculty who were here are super impressive.”

A student weighs in

Also at the table was Calvin philosophy student, Paul Manata. Pleased and impressed with Manata as a student, Corcoran invited him to co-author a paper to present at the workshop. “The philosophers who were there are stars in the world of consciousness studies and professors in the best graduate programs,” Corcoran said. “So I just thought that it would be a great opportunity for Paul to mix it up with some very influential people.”

The format of the workshop allowed an hour for each participant to introduce the paper they wrote, that the other participants had read ahead of time, and then receive feedback. “Paul and I will take notes and take what comments or criticisms that we think are helpful, and later we’ll revise the paper in light of that feedback and hopefully get it published. That’s the idea with all the papers,” explained Corcoran.

Manata valued the opportunity to hear directly from the expert philosophers, especially since they had spent time with the paper and the ideas ahead of time. “Those comments are always the best, the most incisive and rigorous,” he said.

For an undergraduate student like Manata to work side-by-side with a professor and rub shoulders with top scholars in the field is a rare opportunity. “I have a lot of friends that are in top philosophy programs across the country and a lot of their professors don’t even know their names,” he said. “They definitely don’t get to work with their professors in a close way, especially to actually work together on a project.”

And Corcoran is quick to point out that this type of student-professor collaboration is not unique to the philosophy department at Calvin. “Lots of the departments at Calvin have faculty who are very active in their disciplines and who open themselves to student involvement and that’s a huge thing,” said Corcoran. “At a top research university, those faculty are going to be working with graduate students but not with undergrad students. I don’t care how good you are, it just doesn’t happen.”

Such an opportunity has enhanced Manata’s education, giving him new insight into a field that he hopes to pursue through the PhD level. “You get to learn both through observation and hands-on experience how to write better, how to think better and how to raise your ideas better,” Manata said. “Being able to write well and explain your ideas well is key in philosophy.”

“I loved witnessing how philosophers argued against the various papers, the kinds of criticisms that they raised and the ways they raised them,” Manata said. “I was able to learn by example, getting to see some of the best philosophers in the business doing what they do best.” 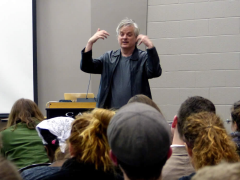 David Chalmers gives a lecture at the workshop. 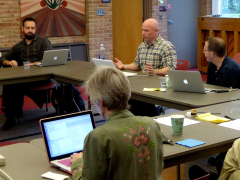 Paul Manata and Kevin Corcoran receive feedback on a paper they co-authored for publication. 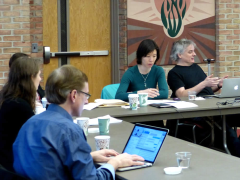