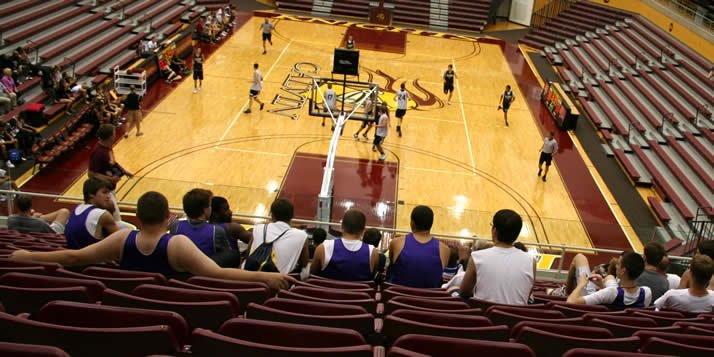 Van Noord Arena filled with the chirping of sneakers and the whistles of referees. Calvin’s third-annual Summer Slam was underway.

On Friday, June 24, Van Noord Arena was filled with the chirping of rubber sneakers and the whistles of referees. Six teams warmed up on the arena’s three courts. A buzzer sounded, and the players formed up to begin their games. The second day of Calvin’s third-annual Summer Slam Team Camp was underway.

Since arriving Thursday night, the 16 high school boys’ teams had played a series of scrimmages in the arena and the Hoogenboom Health and Recreation Center. At 1:30 p.m. on the arena’s south court, East Kentwood squared off with Tri-Unity Christian in the last scrimmage before the tournament.

The teams played hard, racking up fouls on both sides, but Tri-Unity pulled ahead early and kept its lead. After the game, East Kentwood coach Jeff Anema chided his team for being too gentlemanly on the court. The players left for the Noordewier-VanderWerp residence hall, where the more than 200 players were staying for the weekend.

East Kentwood is the first public school team to participate in Summer Slam. “We’ve got a couple freshmen who haven’t been on a college campus before, haven’t been to the dining hall, and they’re really enjoying it,” Anema said.

Anema chose to bring his team to Calvin for several reasons: “One, they get to experience college life; two, they get to play against teams that are well-coached; and three, I realize we’re a public school, but I think our kids see … students that have a spiritual focus. And I think they really benefit from that exposure.”

If invited, Anema said he would bring his team to Summer Slam every year.

Later that afternoon, Melvin Harris, a senior and a second-year starter for East Kentwood, was walking back to the Hoogenboom with his team. Anema had scheduled a pre-tournament meeting. Although Calvin is not on his short-list for colleges, Harris liked what he was seeing. “It’s a nice campus,” he said. “I like the feel out here.”

East Kentwood’s team represented the largest school at the tournament, but Harris was impressed with the competition. “Hopefully we get some momentum going after Holland Christian,” he said. “We had a rough start the last two games.”

A benefit to school, program and players

When Calvin men’s basketball coach Kevin Vande Streek organized the first Summer Slam three years ago, he wanted to break with the format of past Calvin summer sports camps: “We’d done team camps before, but we’ve always charged the teams to play, and we’d never had them over-night before. I went to the development office and asked them if they would cover the tournament charges.”

Vande Streek succeeded: After travel expenses, the cost of the camp is completely covered by the college.

Westminster coach Eric Bain and his team crossed eight hours of highway to come to Calvin from their home in St. Louis. Bain said his players, who attend one of the few Christian high schools in their area, were not disappointed with what they found: “They definitely see the difference in the attitude of the kids. There’s not as much trash-talking. It’s more real basketball.”

The Girls’ Summer Slam Team Camp begins Thursday, June 30 with the first scrimmages starting at 2 p.m.in the Spoelhof Fieldhouse. The tournament begins at 5 p.m. Admission is free to the public. A full schedule may be found on Calvin’s Sports Information site. 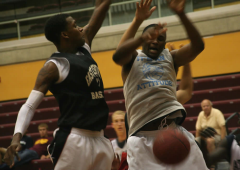 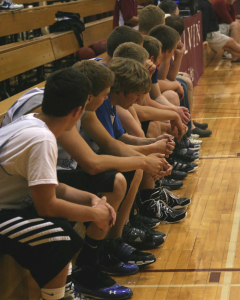 A team on the sidelines of Van Noord's main court 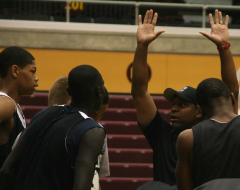 Players get a pep talk 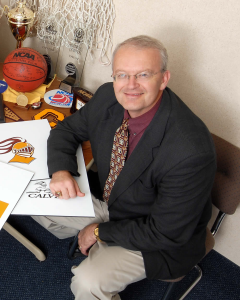