Rare asteroid finally gets a name 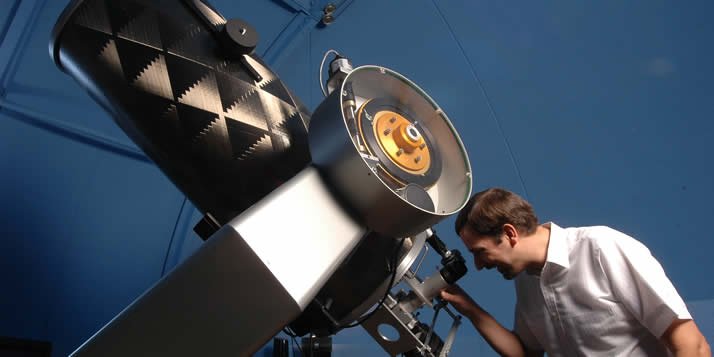 A mythological hero of the Trojan War—a man the poet Virgil called “the single most just man among the Trojans and the best preserver of fairness”—now has a place in the cosmos, roughly the size of Grand Rapids, thanks to Calvin students and faculty.

What's in a name?

In late August 2008, a rare asteroid discovered at Calvin in March 2006 was officially granted the name Rhipeus by the International Astronomical Union (IAU).

Calvin student Josh Vanderhill and professor of physics and astronomy Larry Molnar discovered the asteroid more than two years ago, and it was temporarily named 2006 FT9. The finding was not uncommon; at the time Calvin students and faculty had already discovered 60 asteroids, and since then have discovered over 100 more.

Yet this asteroid was itself uncommon.

"You could tell immediately that this was something different,” Vanderhill said. “It moved across the computer screen much more slowly than our typical discoveries, meaning that it was much farther away.”

Rhipeus was not one of the Main Belt asteroids, which exist in a broad region between the orbits of Mars and Jupiter. Vanderhill and Molnar concluded it was a Trojan asteroid: the first one discovered at Calvin.

"I was very excited when I realized what we were seeing,” said Vanderhill.

Trojan asteroids share an orbit with Jupiter, and after its discovery, the asteroid’s orbit was tracked. But after 25 days, it became too faint to observe. One year later, however, the earth was positioned to view the asteroid once again.

Calvin Professor of physics Stan Haan challenged his Physics 134 class in the spring of 2007 to locate the massive object. After a long process, the class recovered the Trojan asteroid. Additionally that spring, Kathy Hoogeboom wrote her honors thesis about possible origins of Trojan asteroids and sophomore Melissa Haegert (also a recipient of the prestigious Barry M. Goldwater scholarship) took up where Kathy left off as a summer research assistant. A paper on the combined results was published the next winter.

After tracking the asteroid further in spring 2008, Calvin was poised to decide on a name for 2006 FT9, to be approved by the IAU.

From The Iliad to Calvin

Molnar looked to history for a suitable name. A century ago, Max Wolf, a German astronomer, pinpointed the first Trojan asteroid in 1906, which he named Achilles, after a hero of the Trojan War. Scientists adopted the habit of naming objects locked in Jupiter’s resonance after heroes in the Trojan War, and Rhipeus is no different.

To Molnar naming the asteroid was no arbitrary act: “We get to show our values through a name,” he explained. He enlisted the help of H.D. Cameron, his classics professor in his days as an undergraduate at University of Michigan.

Molnar decided that Rhipeus, a noble but unsung casualty of the Trojan War, would represent Calvin well. In Dante’s Paradiso, Rhipeus was the only non-Christian to be placed in Heaven, let alone the lofty sixth layer of what else—Jupiter. “It is a statement by Dante about our God,” said Molnar. “God recognized the justice of Rhipeus.”

This year, on July 4, Molnar submitted the name Rhipeus to the IAU, and on August 25 he received word that it was approved.

Molnar explained that this discovery is powerful confirmation for the department. Molnar recounted that when he arrived at Calvin a decade ago, the astronomy program at Calvin was not yet established. He and Deborah Haarsma were hired at Calvin to launch the program. Now, 180 asteroid discoveries later, Molnar commented on his vision for the department: “Our goal was to go beyond teaching about science; we wanted to make opportunities for students at all levels to do science. With the Trojan asteroid work and other ongoing projects on stars and galaxies, that goal is now a reality.”

Haegert’s experience is evidence of that: “I've always dreamed of doing professional astronomy research, and the Trojan project was an open door for me,” said Haegert.

Molnar explained that officially naming the rare asteroid is just “icing on the cake.”