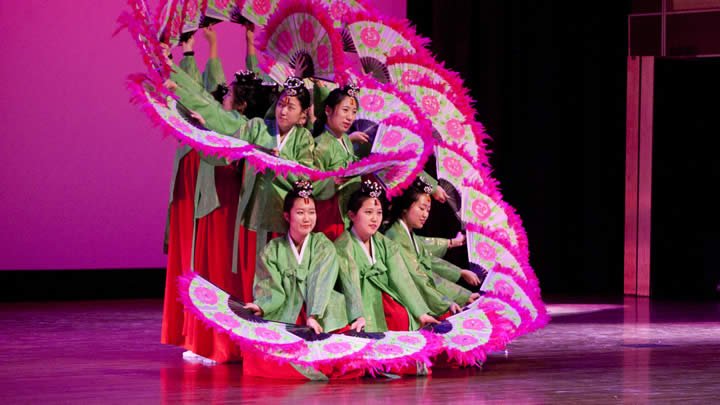 Since 1995, Rangeela has been an annual event at Calvin College.

When Natalie Dunn came to Calvin, she heard upperclassmen talking about this event called Rangeela, where international students share their culture with the Calvin community, fitting in perfectly with what Dunn loves to do. “I get really excited when people ask about where I’m from and the customs at home. I want people to know about our cultures, where we come from.”

For 20 years, Rangeela has been an event for the Calvin community to share in the expression of various cultures and celebrate the diversity on campus. “With a footmark, you leave your presence,” said Sue Kang, co-director of Rangeela 2015. “We are hoping that through this theme, marking the 20th anniversary of Rangeela, we leave something for you. And then we’re asking the audience, what’s your footmark?”

For Dunn, a third-year music major, the footmark theme hits close to home, as other cultures have had a great impact on her life and she hopes to do the same through this show. “I’m from Hong Kong, a very diverse city where you see a lot of different people, not just Chinese, but a lot of Indians, Filipinos and British for example,” she said. “I also grew up in an international school. My friends are from different cultures. Growing up in that setting made me really appreciate different cultures coming together.”

Dunn’s Chinese heritage is very important to her, but she loves hearing from other people about their backgrounds. “There’s a whole world of so many different people coming from so many different places. It gets me excited to experience something outside of my own culture because it makes me realize that the world is bigger than myself—like I’m part of something bigger.”

For so many Calvin students, both international and from the United States, Rangeela provides the opportunity to “be a part of something bigger.” Participants are international students from all over the world and U.S. students. The 12 acts that form Rangeela 2015 represent five continents.

Dunn is an act leader for the Chinese modern dance which is tied in with the Chinese traditional act. The theme of these acts is a traditional Chinese wedding. “We start with the dragon dance, showing the ancient and traditional side of the Chinese culture, moving on to the ceremony and the festivities surrounding it,” said Dunn.

Following the traditional portion of the Chinese act, Dunn’s modern portion highlights the modern aspects of Chinese culture. “When you think of Chinese cultural dances, you think of a slow fan dance or the pretty twirling, but there’s more to it than that. Our dance is very modern, while still representing the culture and customs.”

The Chinese act’s transition from old to new ties well to the footmark theme. “I hope that this year’s Rangeela will leave behind a footmark, an impression in people’s minds and hearts of what our cultures represent,” said Dunn.

Dunn reminded that Rangeela is more than entertainment. “It’s not just entertainment; it’s also a learning experience,” said Dunn. “Every time I go to Rangeela, even I learn something new about different cultures. Even if there is a particular act many years in a row, they’re all different, representing a different aspect of that culture.”

Kang emphasized, “It’s not just showing off talent. It has deep insight to it. We are revealing our stories. Diversity is something that God created. It’s part of God’s grand design, and we’re celebrating that.”