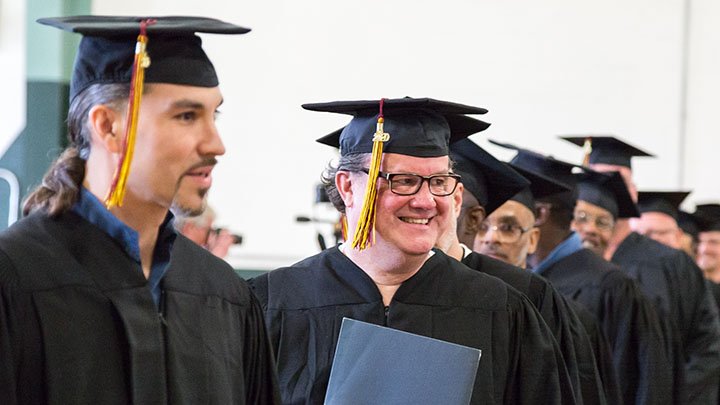 A gymnasium filled with moms and dads, sisters and brothers, administrators and teachers. Men seated in a couple of rows, dressed in black caps and gowns. Their smiles only contained by their ears. The room filled with jubilation, and hope.

It’s a familiar scene this time of year. But, not here. At least, not yet.

Peer out a small rectangular window and you quickly realize why. Twenty yards from the podium stands a 20-foot tall fence, wrapped in barbed wire.

“We’ve embarked on a lot of firsts these past few years, we know it, those who work here know it, you guys certainly know it,” said Heidi Washington, the director of the Michigan Department of Corrections.

This first? A commencement ceremony inside Handlon Correctional Facility in Ionia, Michigan. And it’s part of another first – the Calvin Prison Initiative—a program that offers 20 inmates each year an opportunity to begin pursuing a bachelor’s degree in ministry leadership. It’s the type of program not happening anywhere else in the state, and in few places across the country. On Monday, 15 students from the first cohort earned their associate’s degrees.

“This first group behind me, literally took the stonings and they made the sacrifices to get this program up and running,” said DeWayne Burton, warden at Handlon Correctional Facility, during Monday’s Commencement ceremony. “Remember, when we started this program there was no manual to refer to. Basically you [graduates] helped us develop a blueprint for how to run a college program inside a prison.”

A blueprint, and a vision

That blueprint was developed through collaboration among Calvin College and Calvin Theological Seminary faculty and staff, students at Handlon, and leaders in the Michigan Department of Corrections.

That blueprint has unleashed a powerful vision, replacing despair with hope … radical hope.

“We humans are sustained by hope. It is the link between our past and our future, and when there is no future, there is no hope,” said Cheryl Brandsen, provost of Calvin College during the 2018 Commencement Address at Handlon.

“The book of Jeremiah tells the story about a despairing people who had lost hope,” said Brandsen. “Jeremiah wrote them a hard letter: Look, you are going to be here for a long time. 70 years, in fact. Don’t listen to false prophets who are trying to make you feel good by promising a speedy release. It’s not going to happen. So, what should you do? Settle down. Build houses. Plant gardens. Make a life. You will die in captivity but your children will not. Yes, you will weep when you remember your former lives, but don’t weep as those who have no hope. In fact, pray for this strange country, and seek the welfare of this city. I do have a plan for your future that will give you hope. But the plan is not one of going home right now. It is to stay put and prosper. If you know the rest of the story, the exiles did that, they formed new lives in strange places, grasping onto the radical hope that God had in mind: a future for their nation and their children."

Promoting the welfare of the city

Brandsen then shared a poignant line from Calvin’s new vision statement, approved by the board of trustees earlier this month, which intentionally echoes the Jeremiah passage: “Calvin University will be animated by a Reformed Christian faith that seeks understanding and promotes the welfare of the city and the healing of the world.”

The inmates in the Calvin Prison Initiative program—many of whom are serving life sentences—have now found purpose through a Christ-centered education; they’ve found hope as the antidote to despair.

“I was arrested eight months after graduating from high school,” said Michael Duthler, who provided the student reflection at the ceremony. “I had an idea of what education was but I didn’t connect it to vocation, this idea of being a prime citizen. The two ideas were as far apart as heaven was from earth, but now are very much a part of how I understand my role on earth on my way to heaven. “

And when students like Duthler understand that God’s Kingdom is not confined by anything, that all square inches of creation are in play, it opens doors that aren’t limited by physical space.

“What began for me with an acceptance letter to CPI has formed me into the man who I am today and is inextricably bound with how I see myself in the future, someone who desires to break in God’s Kingdom, be that agent of renewal, to restore shalom, by sharing my education with others, by living out my vocation in a way that glorifies and magnifies God and allows his presence to be known in whatever sphere I touch,” said Duthler.

Living as prime citizens takes courage, and as Duthler says, it is understood and developed within community. He cites examples of professors volunteering to teach two classes (instead of the required one) to allow for more interaction with students, or one professor driving up to Handlon on Christmas Eve to deliver semester grades; he recalls tutors patiently pouring over papers and providing correction or simply words of encouragement; and fellow peers who organize study groups and make themselves available to answer questions and have deep conversations.

“Since you guys have taken the lead, others have followed and guess what, others will continue to follow,” said Burton. “You graduates have also displayed the ethics that support the values that Calvin College has. People look at what you do and not what you say. Values are words, ethics are actions. As you continue to demonstrate values through your actions, the ethical culture at this facility will continue to change. One of the other things you gentleman are displaying is a solid reputation for Calvin College and the Michigan Department of Corrections … If you guys continue with this not only will this program be the best in the country, you guys will be successful and will be the best versions that you can be of yourselves.”

While the program was started inside one correctional facility, with one group of men, the vision for its impact goes well beyond the fences of Handlon.

“I was listening to the provost and that wonderful speech,” said Washington. “She talked about how Calvin changed its vision statement and talks about the welfare of the city … and I thought how as the director of the department of corrections I should be concerned about the welfare of the department, the welfare of that city, the big department of corrections. And I’m here to tell you that this department of corrections and this administration is very concerned about that. So, whether it’s the Calvin initiative or the vocational village or the second vocational village or the third one or the many of the other things that we are doing to help people be successful, to help give people hope that there is a future for themselves when they leave here and even if they aren’t leaving here to help make this city a better place, we are committed to doing that, and we are committed to doing that with our partners.”

As the 15 graduates move their tassles from right to left, hear their names read from the podium, shake hands and receive their diplomas, those barbed-wire fences sitting 20 yards to their left are no longer barriers to hope.

“When I think of radical hope I think of you students, perhaps thinking at one time that your current status limited what you hoped for, until now, when the unimaginable is proving itself imaginable,” said Brandsen.

“When I think of radical hope, I think of Warden Burton and other administrators here who had the courage to imagine a different kind of future. ‘Unimaginable, until it isn’t.’”