Quadruple champ in triple jump has single goal for nationals 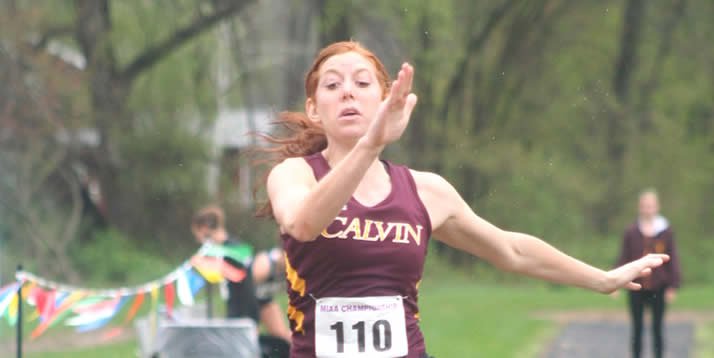 Sometimes Julie Bratt measures out more than 13 yards, looks at the distance and thinks to herself, “That’s impossible. Do I get from here to there in three steps, really?”

That’s the goal anyway for Calvin’s—and the MIAA’s—best-ever triple jumper.  And it’s not exactly three average steps—not even like three giant steps in ‘Mother May I?’ It’s more like a flying leap on each of the steps that has propelled her to the top of Calvin’s record board and the top of the MIAA each of the last four years—a feat never before accomplished in this event in the conference.

“I’m amazed by the human body and what it can do,” she said. “My expectations for myself have been far exceeded.”

Bratt, a senior, acknowledges that hers is a unique event. Some states, like Michigan for example, don’t recognize it among their roster of events for high school events. Washington, where Bratt hails from, however, does.

“I learned it at a meet my freshman year in high school (Lynden Christian), and I really, really loved it,” she said. “I just kept working at it, and by my junior year I finally hit the 36-foot mark.”

Since then, Bratt has added more than another yard by changing her technique, concentrating on form and gaining strength.  She broke her own mark, set in 2008, three times this year, most recently posting a 39-1¼ to top Calvin’s record board.

Calvin’s track and field coach Jong Il-Kim isn’t surprised at her success: “She is a very dedicated student, and she has worked so hard to improve her technique.”

Her goal for next week’s NCAA III National Championships in Marietta, Ohio, is to earn an All-American berth. Something, she believes, a mid-38-feet jump would get her. She’d be even happier with a jump of 39-4 (surpassing the 12-meter mark), which would almost certainly put her in the top eight (an All-American).

“The field for the triple jump this year is very strong,” said Il-Kim. “For example, it is stronger than the competition in (NCAA) Division II. I think that she is in good condition right now, and if she keeps her enthusiasm and desire, she has a good chance of being an All-American, but in sports you never can promise.”

Last year, Bratt placed 12th. Competing at indoor nationals for the first time this spring, she finished just out of All-American honors in ninth.

“Competing in the indoor season really helped,” she said. “I had the feel for it. I started jumping in November instead of March, and I felt like I had the rhythm of it all coming in.” (Calvin’s indoor competition was made possible by the completion of the Huizenga Tennis and Track Center this fall.)

During the regular season this year, Bratt posted a 37-7¼ at the MIAA conference championships, a new league record. “My legs didn’t feel very good that day, but I was happy to be able to fight through and still land a pretty good jump,” she said.

That gives Bratt confidence for the upcoming national competition. “I feel like I can consistently get something in the high 37s or 38s,” she said, “and we’ve been tapering, so I think my legs are going to feel pretty strong.”

Nationals in place of Commencement

Bratt’s parents will see her compete for the third time in her collegiate career. Calvin and Melinda Bratt had purchased plane tickets for the weekend to attend Calvin’s Commencement; instead of seeing their daughter walk across the platform in Grand Rapids, they will drive down to Ohio to see her jump.

“We could see that there would be a conflict (with Commencement) already last year when she made it to nationals,” Calvin Bratt said. “It’s been exciting to follow her from a distance, but this will be fun to see her compete in person. I remember thinking when she was a freshman in high school that she could be pretty good at this.”

Bratt, an elementary education major, will complete her degree this fall in Rehoboth, N.M., as part of Calvin’s semester program there. She will student teach and, hopefully, help coach jumpers.

“Calvin was a really good place for me,” she said. “Track was significant to me, but I didn’t want it to be my whole focus. Calvin has really great community, so you’re able to be involved in a lot of different things and feel a part of that.”

The end of her track career is hard to imagine, though, she said. “Triple jump is not something you can keep doing after college,” she said. “I’d love to help other jumpers though.

“No matter what happens [at nationals],” said Bratt, “I know that I can take the memories and the blessings and the accomplishments with me.” 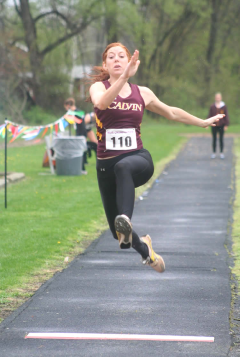 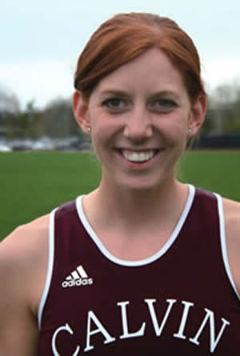 Bratt will be accompanied by Calvin’s other national qualifiers: Rachel Boerner in the 400-meter hurdles, Heather Koning in the 400 meters, Lauren Bergstrom in the 800 meters, Elizabeth Smit and Gretchen Braymer in the steeplechase, Sara Reasoner in the shot put and discus, Jessica Koster in the 10,000 meters, Rachel Boerner, Katie Roelofs, Heather Koning, and Kristen Van Sickel in the 4x400-meter relay, and Jed Christiansen and Erik VanKampen in the both the 5,000 and 10,000 meters, and Nate DeHaan and  Aaron Goodman in the steeplechase and Eric Michel in the pole vault.