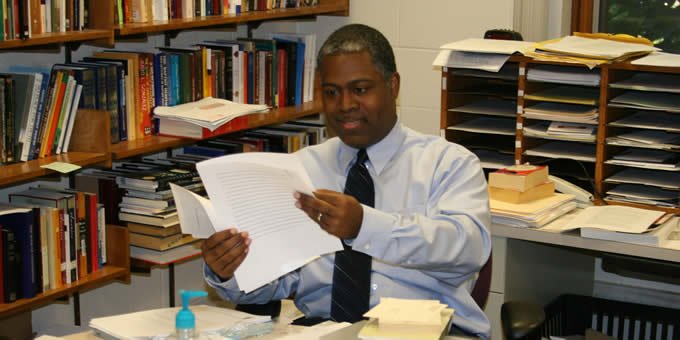 History professor Eric Washington's research concentrates on how African Americans have articulated the idea of being Reformed.

Calvin history professor Eric Washington has made a specialty of studying African Americans thought within the Reformed tradition of Christianity, specifically Calvinism. His interest in the topic dates back to 1998 when he embraced Reformed theology after reading Martin Luther's On the Bondage of the Will and R.C. Sproul's book Chosen by God: "It answered the tough questions I had regarding how a person comes to faith. Being African American and Baptist, I knew of no one in my circles who was Calvinist. This sparked my interest in searching for African American Calvinists." Washington, a native of New Orleans, La., did his undergraduate work at Loyola University before going on to earn a master's from Miami University in African history and a Ph.D. from Michigan State University in African American history.  ?

How did your interest in African American participation in the Reformed and Calvinistic tradition begin?

When I began to study and immerse myself in Reformed theology, I realized that what I believed had historical relevance and that there is a connection between me and the "church universal." That naturally led me to think about and to begin investigating where people of African descent fall within Reformed Christianity. It wasn't until I got my hands on Anthony Carter's book, On Being Black and Reformed, that I really had a handy reference.

What happened as you began to move from your Baptist roots to a more Reformed approach to your faith?  ?

I told my pastor that I was now a Calvinist, and I think it went over his head. But I served as an associate minister at the church where I was, and when I began teaching and preaching within the framework of Reformed theology, eventually I was asked to refrain from doing so. And that ended a long tenure at that church, which was tough, but I was at that point committed to the Reformed, Calvinist faith.

Why does it seem like we know so little about this topic?

First, churches that call themselves "Reformed" are relatively few when compared to other churches here in the U.S. and even North America. Within those numbers, African Americans are very, very few. Even when we consider the numbers of African Americans within Presbyterian bodies, we aren't talking about millions of people. When we think of African American Christians, we think of Baptists, Methodists and now Pentecostals and Charismatics. I also believe it takes someone within the Reformed tradition to see Reformational tenets in the writings of otherwise well-known historical figures like H. H. Garnet. Scholars tend to bypass that the man was a Presbyterian and that Reformed theology had to affect his speeches and writings.

Who was H.H. Garnet?

Henry Highland Garnet was a Presbyterian pastor and social activist during the 1840s and beyond. He was born into slavery in Maryland in 1815, but he and his whole immediate family escaped slavery in 1824 and settled in New York City. Eventually, Garnet received a very good education, including a seminary education at a Presbyterian school in New York state. He began pastoring in 1843, but he's best known for his "Address to Slaves" in 1843, which he gave in Buffalo, N.Y., at a conference. In the speech he advocated for slaves to lift off their shackles through outward rebellion. I'm doing the speech no justice; it needs to be read carefully because the reasons he gives for slaves to revolt are quite biblical and Reformed even.

How intertwined are African Americans, Calvinism and slavery?  ?

One famous African-American Calvinist, Lemuel Haynes, offers a great example of how some African American applied Calvinism to their contexts. Haynes was a Congregationalist pastor who spent 30 years (1788-1818) of his life pastoring a white congregation in Vermont. He applied Calvinism to speak out against both the Atlantic Slave Trade and slavery itself, and according to his Calvinism he believed that Federalist Party was the most proper party to lead the young American Republic.

What gets you excited about the topic of African Americans and the Reformed tradition?

The thing that gets me excited is I believe that Reformed theology answers those historic questions that African Americans have contended with since 1619 (when the first group of African servants arrived in Colonial America). Because Reformed theology begins with the sovereignty of God and his all-encompassing Providence, there is an anchor for African Americans as we seek to understand our historic plight on these shores. I admit that the "secret things belong to God," but I'm impressed how African American Protestants (not just Reformed folk) during the 19th century asserted that God's plan included their enslavement, but also their acceptance of the gospel, their freedom from slavery, and their sending forth missionaries back to Africa to help "redeem" it. I have problems with their notions of what entailed redemption because they held that bringing Western civilization was part and parcel with redemption. Anyway, that impresses me. More so than that, what excites me about this topic is that I believe Reformed theology is an accurate expression of Holy Scripture. When the gospel is preached and taught from a confessional Reformed perspective there is Jesus Christ as he has revealed himself on the pages of his Word. I do believe that Reformation is sorely needed in African American churches.  ?

What is next for you in terms of your work in this area?

Right now, I'm expanding my research on the topic of Ethiopianism, which was an African American version of the Providential Design theory regarding African enslavement and their Christianization here in the U.S. To be brief, some European-American Christians (Protestants) believed that God intended the enslavement of Africans so that they could brought under the gospel and receive salvation. Some European-Americans believed some Christian slaves should be emancipated in order to return to Africa and preach the gospel … My research is on Lewis G. Jordan, who served as corresponding secretary of the Foreign Mission Board of the National Baptist Convention, USA, and how he articulated Ethiopianism to motivate National Baptists to support African missions.

History professor Eric Washington will examine the church’s role in racism in a lecture titled: “The Most Segregated Hour: the History of the African-American Church.” The lecture, beginning at noon, Wednesday, Feb. 16, will accompany a luncheon in the Meeter Center Lecture Hall. (Those interested in attending the luncheon should contact Ebonie Atkins at era@calvin.edu.)