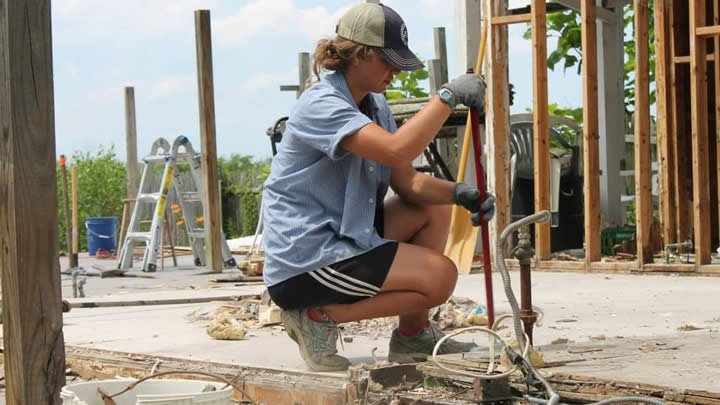 Senior Carolyn Brown spent a summer leading middle and high school groups in cleanup and rebuilding efforts in the aftermath of Superstorm Sandy.

When it comes to being the hands and feet of Christ, student Carolyn Brown knows where her priorities lie.

The senior public health and Spanish double major has served in capacities from disaster relief to volunteering at a homeless shelter to her current role as an intern at the Grand Rapids Red Project. The organization offers HIV testing, clean syringe access and overdose prevention services.

Brown, of Battle Creek, Mich., says the work the Red Project is doing for the community is a perfect example of the work Jesus calls Christians to do.

“Jesus spent his time with prostitutes and drunkards and the people who were shunned by the community,” she said. “That’s what Red Project is doing.”

Brown grew up watching her dad work as a dentist, spending time in his office, and she had an internship with a general surgeon in high school. She says she has always known she wanted to work in health care.

When she first came to Calvin, Brown chose a pre-med major, until she went to a global health mission conference that ignited her passion for public health care.

“It really showed me public health is where I want to go, just because of the community focus and the focus on serving people’s basic health needs and making sure people have access to tools and resources,” she said.

Brown’s health psychology professor at Calvin, Julie Yonker, said she is proud of Carolyn and will be sad to see her graduate, but knows she is stepping into her calling.

“Carolyn is an excellent example of someone who is continually seeking God’s direction and guidance with respect to where she discerns him calling her,” Yonker said.

Since her freshman year at Calvin, Brown has volunteered every Tuesday at the homeless shelter Dégagé Ministries, dishing out ice cream, painting nails and forming relationships with disadvantaged community members.

She said she is grateful for the opportunity to impact lives through service, both at Dégagé and at another place she volunteered, Gilda’s Club Grand Rapids, a nonprofit that serves cancer patients. There, she worked with the kids’ programs, doing arts and crafts and making preparations for their summer camp. Brown also spent a 10-week stint in New Jersey leading teams of middle and high school students in home demolition projects as part of the cleanup effort following Superstorm Sandy.

What has all of this taught Brown?

“It’s really easy in college to be focused on yourself,” she said. “One of my main goals in college was to make sure that I do invest in the community I’m in. I believe that’s what Jesus calls us to do.”

Alongside all the lessons volunteering has taught her, Brown’s internship at the Grand Rapids Red Project has driven home her sense of calling.

She first visited the nonprofit during a health psychology class taught by Yonker, associate professor of psychology at Calvin.

“I fell in love with it,” she said. “Just with the goal in general of what they’re trying to do and the community that they’re working with. I wanted to do an internship there so bad, so then after that, I talked to my professor and she made connections, and then I communicated with them all summer trying to set something up.”

Brown’s patience paid off. Now, she is working with the hepatitis C program, doing data entry and analysis and getting patients connected with care.

Brown said she is glad she’s been able to use her Spanish-language skills at the Red Project’s mobile health unit.

“Our second site on Friday is in the Hispanic community, and so we have a lot of Spanish speakers,” she said. “I’m bilingual, so I can speak with them. I really enjoy connecting with people in their first language, talking about living healthier lives through safer sex and drug use."

Looking ahead, Brown plans to earn her master’s degree in public health and then take her skills to South or Central America.

Wherever she goes, Brown plans to keep her eyes fixed on a guiding principle:

“Jesus was a servant-leader, and I would love to emulate that.”