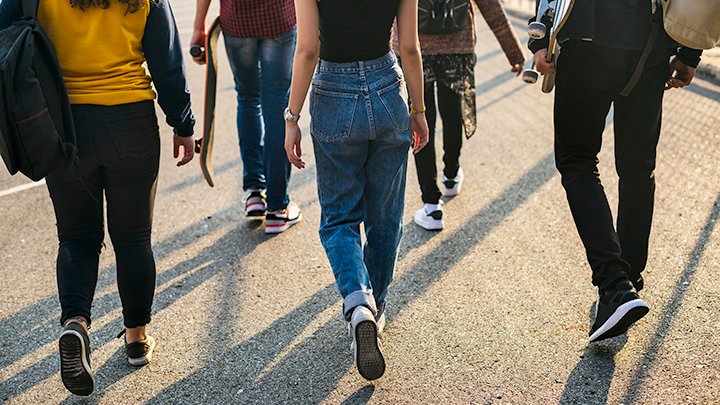 Emily Helder, an associate professor of psychology at Calvin University, has long had an interest in studying the impact a child’s early experiences in life has on their later development. Her years of study in this area recently led her to the cutting edge of her field.

“I was doing a study with international adoptees. We were meeting with families and the kids each summer to track how they were adjusting,” said Helder. “But as these kids entered into elementary and middle school, a portion of the families and kids talked about the challenges they were having making friends, and having a feeling of discontentment with peers.”

This voiced concern motivated Helder to dig deeper into the problem and explore ways to help.

Her research led her to discover a curriculum out of UCLA that was used in a different context. She explored the material and thought the topics that were covered could be adapted to fit the population of students she was working with. So, she applied for a grant through the Michigan Health Endowment Fund that allowed for herself and four other clinicians to be trained on UCLA’s PEERS intervention, and then for the clinicians to deliver and assess the usefulness of this intervention with a new population.

The new population? Adolescents who have been adopted and who are experiencing peer social difficulties. The study represents the first application of this type of intervention on adopted individuals.

“While most adoptees don’t struggle with peer relationships, they are at a higher risk because they could have experienced abuse or neglect prior to adoption or perhaps were raised for a time in institutional settings,” said Helder. “When those things are present, sometimes there can be skill gaps that emerge because they haven’t had the same social interaction experience at an early age that forms the foundation for later. For example, the ability to be able to pick up on social cues or to distinguish whether someone is laughing with you or laughing at you. A lot of the foundation for that is laid in early childhood. If disruption in caregiving happens early on, it can be hard to pick up on some of those social cues.”

The 16-week curriculum focuses on helping teens develop the skill sets associated with making and keeping friends, deepening existing friendships, learning how to handle conflict, and how to make new friends. And doing so, by working on one concept each week.

Word of this study not only piqued the interest of adoptees and their parents, but also students at Calvin University who were interested in partnering on this research project. Francie Bailey and Ava Schneider, two senior psychology majors at Calvin, expressed interest during their junior years.

“I love working with kids,” said Schneider. “And throughout college I have become very interested in adoption as well, so it seemed like the perfect project to work on.”

Perhaps the perfect project, but maybe not the perfect timing. The restrictions of the pandemic meant that Bailey and Schneider would spend their summer working remotely. While the two would have preferred to be in-person, they found the silver lining in the situation.

“We did a lot of data entry, data analysis, and literature review,” said Schneider. “So, it was kind of nice to have a little more flexibility with our schedules as both of us were taking classes. This allowed us to do some of this work at night.”

“It was a blessing in disguise with everything going on for me. I was studying for the GRE and taking a class, so working remotely gave me flexibility to structure my schedule,” added Bailey.

If summer was considered the preparation and practice time, then fall was the equivalent to the game. It would be the time Schneider and Bailey would get to work alongside a cohort of students and a cohort of parents. And for all but just a couple of weeks, they’d be able to do this work in-person.

During each of the weekly group sessions, 16 teens (eight on Monday nights, eight on Wednesday nights) were taught important social skills and were given an opportunity to practice the skills with their peers. From learning about good sportsmanship to how to enter and exit a conversation to how to handle oneself on social media, the students learned many social skills. Their parents attended separate sessions at the same time each night and were learning how to assist their teens in making and keeping friends.

Bailey and Schneider spent time in the different classrooms and were encouraged by the impact they experienced from the first week to the last.

“I saw change happening in so many of the kids. Our Monday group was so quiet the first couple of weeks, but by the end, they were so close,” said Schneider. “During our last couple of sessions when we were online they were still laughing with each other, putting messages in the chat, exchanging phone numbers, this was really cool to see.”

“It was the coolest thing to see their transformation. They all transformed in their own way, and some were so much more obvious than others, but each of them did grow through this experience,” said Bailey. “They went from all being strangers to our final online gathering where we spent two minutes on each person and had them each write a compliment, affirmation, good memory about each other. It blew us all away. We just kept seeing comments and comments of praise for each person. Just seeing all of that was the coolest thing ever.”

And the experience also shaped the research assistants. For Bailey, it broadened her perspective on adoption.

“I know what it’s like for me [being an adoptee], but meeting such a diverse group of people being adopted at different ages, places, length of time, and stuff, it was super eye-opening that adoption is this huge thing. It’s easy for me to think it’s my own experience, because I had siblings that were all adopted as infants in China. So, when I think of adoption, that’s what I think of. For each of the students I worked with, they see it so much differently. Everyone has their own experience, and each is super valuable.”

For Schneider … she developed a confidence in her abilities.

“I’ve become much more comfortable interacting with teens. One thing I was nervous about with this group is just being able to effectively handle it if a student needed to share something important. By talking with my profs and Francie, I realized I’m capable of doing that. I have a lot to learn still, but I feel a lot more comfortable with that.”

A semester to remember

For both Schneider and Bailey, their final semester at Calvin—one that was clouded with the uncertainty that the pandemic brought with it—was surprisingly among their best.

“This was surprisingly better than I thought,” said Bailey. “I wish we could have gone to Johnny’s and crowded in to talk and meet friends, but I’m super thankful for the time we did get on campus. So much more time than I ever expected.”

“Being in-person, even if at a social distance and masked, was so great,” said Schneider. “My younger sister who goes to a bigger school had a week of in-person classes and then had to go home … This semester, even with Coronavirus, was one of the best semesters at Calvin, which is kind of shocking. I feel like a lot of good things have come out of it, and I’ve learned to appreciate things a lot more.”

Schneider and Bailey are pursuing graduate-level studies next year. And Helder, and her team of faculty, staff, and student research assistants will work alongside another cohort of students and parents this spring.

“Calvin’s mission really motivates me to work in the community. We are working to be agents of renewal,” said Helder. We are helping teens build relationships. I see that as renewal.”