Professor teaches the mechanics and miracle of hearing 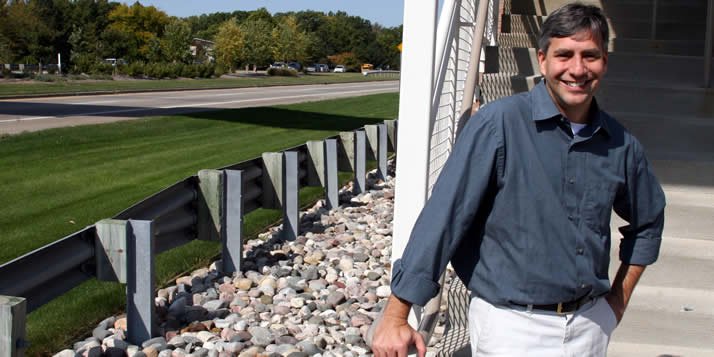 In 2011, Brian Kreisman was chairing a search committee at Towson University in Maryland, where he had spent almost six years as an audiology professor. His department was hiring another audiologist, and Kreisman decided to research other colleges and universities in the U.S. that were also hiring audiologists. He wanted to check out the competition: see what their “help wanted” ads looked like.

In the process, Kreisman discovered an ad from the Calvin communication arts and sciences department, and he was intrigued. He had never heard of Calvin, but he noted with interest that it was a Christian college and that the Calvin job description mentioned a sense of humor as something the department considered a big plus in possible applicants.

Reading that ad, Kreisman felt a tug to explore the Calvin opening for himself, despite the fact he had not been looking for a new position. That night he called Calvin and left a message for Randy Bytwerk, the CAS department co-chair. What he didn’t know was that same day, Calvin speech pathology and audiology professors Judy VanderWoude and Jill Bates—who had been discussing the open position at Calvin—had committed to start praying for an audiologist.

“It was, Judy would tell you and I would agree,” said Kreisman, “a God thing.”

Kreisman grew up in a Reformed Jewish family in St. Louis, Mo. He is a dedicated Cardinals fan. (“My uncle used to take me to games when I was a kid.”) He attended Saint Louis University, where he originally planned to study marketing or advertising or another communications area. In his sophomore year, to squeeze three more credits into his schedule, he took a course in phonetics, an area of speech pathology. The following year, he took audiology.

“It was a good match for my personality,” Kreisman said, adding: “I fell totally backwards into the field.”

Kreisman made another major decision as an undergrad. At the age of 21, he decided to recognize Jesus as Messiah, and he followed that decision with a deeper commitment during his first year of grad school at Indiana University: “I wanted to live for Him,” he said, “to truly dedicate my life to Him. So I committed myself to that and wanted to serve Him and learn more about Him.”

He detoured in 1991 to Covenant College in Coventry, England, then spent a year at Covenant Theological Seminary, where he earned a master of arts in theological studies with a concentration in biblical counseling. In 1994, he worked with Rwandan refugees in Zaire and from 1995 through 1996, he worked as a field worker with Help International in Zambia. (He also started a Bible school in that country to provide formal theological training to pastors who were already leading churches.)

“That was really my first full-time teaching experience,” Kreisman said. “The pastors were very gracious. I had some knowledge and little experience. Most of them had a lot more experience but had no formal training.  I’m pretty sure I learned a lot more from them than they did from me!”

Following his time in ministry, Kreisman returned to graduate school in the United States, first at Washington University in St. Louis, where he earned a master’s in speech and hearing in 1999 and next at the University of Florida, where he earned a PhD in communication sciences and disorders in 2003. In 2005, he and his wife Nicole, also an audiologist, helped to pioneer the audiology program at the University of Canterbury in Christchurch, New Zealand.

In 2006, Kreisman moved on to Towson, and, in 2012, to Calvin, where this semester he teaches two sections of “Speech and Hearing Science” and one section of “Evaluation Procedures in Audiology.” He was recently named the college's William Spoelhof  Teacher-Scholar-in-Residence Chair for 2012–2014, an honor that will free up more time for his research work during second semester.

Kreisman studies the real-world benefits of hearing aids, speech perception and aural rehabilitation. He believes that for people with hearing loss, aural rehabilitation is a critical, although sometimes overlooked, part of their therapy. "We can fit you with the device (hearing aid) … , and we will,” he said, “but the device with no guidance isn’t good enough. We need to do counseling and training too, helping you utilize the hearing you have to the best of your abilities."

This summer, Kreisman spearheaded the construction of a brand new, 10-foot by 10-foot audiology booth in the DeVos Communication Center as a part of the new Center for Amplification, Rehabilitation and Listening. He plans to use the lab both for research and to offer hearing tests and hearing-aid fittings to local residents. Speech pathology students will work as his assistants.

“Students in Calvin’s speech pathology MA program need 25 clinical hours in aural rehabilitation,” said Kreisman, “so the increase in audiology research and clinical services is something that our students will really benefit from—and also something we hope really benefits people in the community.”

Faculty of the speech pathology department are delighted that Kreisman is part of the team:

“Brian is recognized nationally and internationally for his research … ,” said VanderWoude.  He brings a wealth of teaching experience at the undergraduate and doctoral levels, and we look forward to students being mentored in the hearing sciences and in audiology.”

Kreisman is eager to help Calvin students learn more about the mechanics—and what he calls the miracle—of the human ear, a subject he discusses with a sense of reverence. He is also excited to be able to make his faith a part of that pedagogy.

"I have taught in the past, say, about the anatomy of how the middle ear works—how amazing it is that these air molecules will hit the eardrum, and it will move about the diameter of one atom, and yet we can hear because of it—and every time I would get choked up in class. But I couldn't talk about God … .," said Kreisman. "I have spent my entire academic career learning not to talk about God.  Now I have the opportunity to maintain a consistent worldview both inside and outside the classroom"

He loves one aspect of audiology best, and he hopes to pass that passion on to his students:

“You're helping people with human communication, which is so critical to who we are as God's children,” Kreisman said. “When people have hearing loss they don't come to us and say ‘I can't hear the turn signal in my car.’ They come to us because they can't communicate as well as they would like with their family and friends and coworkers, with the people they love. That's a critical part of what we do as audiologists, and it's what makes this work so satisfying.” 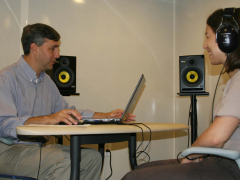 Kreisman at work in the new audiology booth