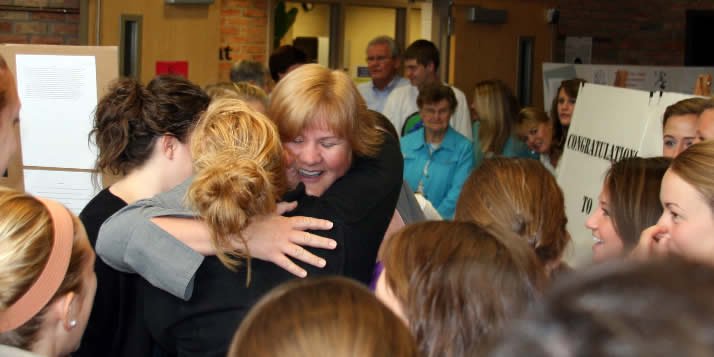 It was 11 a.m. on Tuesday, May 3rd. Just around the corner from the DeVries Hall atrium, packing the hallway adjacent to the engineering department, was a group of nursing students. Clutched in their hands were lyric sheets for the song they were about to sing. More students filled the atrium itself. They looked up the stairway. Tucked out of sight around the corners were biology professor Dave Warners, business professor Cal Jen, young alumni coordinator  Norm Zylstra, family members of Renae Boss Potts and several boxes of Krispy Kreme Donuts.

Then Boss Potts herself appeared on the stairs, and the students commenced singing: “Now this is a story all about how / my life got twisted upside down / and I’d like to take a minute, just sit right there / I’ll tell you how I became the prince of a town called Bel-Air.” The honoree laughed and announced: “I have 60 hugs to give!” and she went through the crowd of students, thanking each of them in turn.

Last week Boss Potts’ students were among those who elected her Calvin’s 2011 Professor of the Year, an honor bestowed by the outgoing Calvin senior class.

“She makes class a lot of fun,” said senior nursing students Renae Sybesma, who voted for Boss Potts. “She cares about her students.”

Boss Potts declared herself shocked at the honor—and the celebration. “I had no idea. I saw my husband with flowers, and I thought, ‘My anniversary isn’t for months yet.’” Her parents and children were present for the festivities.

A 1984 grad—and the first graduate of the combined Calvin-Hope nursing program—Boss Potts has been teaching nursing strategies, pharmacology and leadership management at Calvin, both part- and full-time, since 2000. She takes nursing students to Belize every year to give them greater understanding and compassion for how people in poorer countries live.

Every Calvin senior in the nursing program is required to take pharmacology, so they all pass through her class, and when they do, they meet Will Smith. “Memorizing things can get boring for students, so one of the things they do is make a drug commercial,” she explained. Boss Potts typically kicks things off with a Fresh Prince of Bel Air-themed spot. Thereafter, the photo of Will Smith announces that it’s commercial time in class.

There have been some less-amusing class times, Boss Potts admitted. This past year, her house burned down. Her students responded by showering her with care. “They are just the greatest group of students ever,” she said, “caring, compassionate, loving, tender.”

At Tuesday’s celebration, the students left their names and messages on the congratulations posters displayed throughout the atrium. The Professor of the Year celebration had disrupted the annual poster session hosted every spring by the nursing department.

Zylstra added the donuts, the well-wishers (Warners and Jen were previous recipients of the honor) and the overall disruption. “I think it makes it more memorable for the students when you make a big deal about what they do,” he said. 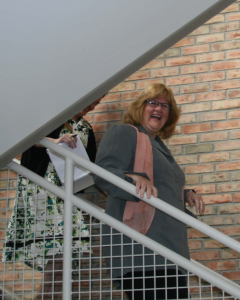 Watch a video of students rapping for Renae Boss Potts.

Previous professors of the year: