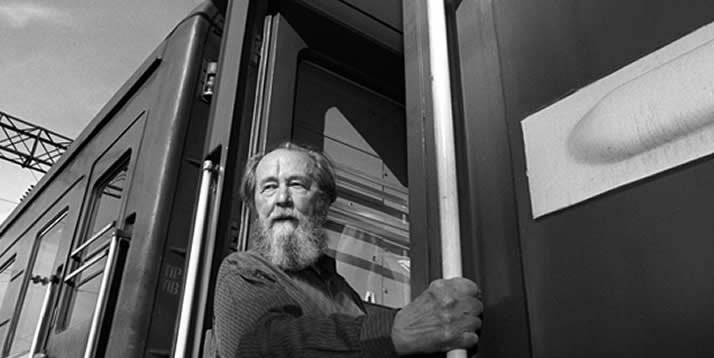 In 1983, Solzhenitsyn collaborated with Ericson on an abridgment of “The Gulag Archipelago,” a partnership that allowed the Calvin professor to stay with the author at his Vermont home. Ericson is currently editing a collection of Solzhenitsyn essays from various sources, which will soon be translated into Russian.

(The top right image comes courtesy of Edward Ericson, Jr. and should not be distributed without his prior consent.)

The literary works of Aleksandr Isayevich Solzhenitsyn (Dec. 11, 1918–August 3, 2008) are widely credited with influencing the downfall of the Soviet regime. Since Solzhenitsyn's death on Sunday in Moscow, Edward Ericson, Jr. has been answering calls from NPR, Los Angeles; the BBC, London and other radio outlets, while carving out a little time to write an article on the Russian author for the Wall Street Journal.

Ericson, a Calvin professor of English emeritus, first read Solzhenitsyn’s work in the 1960s and has devoted considerable writing to an element he found missing in Solzhenitsyn scholarship: the religious context of the author’s moral vision. In 1983, Solzhenitsyn collaborated with Ericson on an abridgement of The Gulag Archipelago, a partnership that allowed the Calvin professor to stay with the author at his Vermont home. He is currently editing a collection of Solzhenitsyn essays from various sources, which will soon be translated into Russian. “My name will be on a book I can’t read,” Ericson said. He took a moment out of his media whirl to answer questions from Calvin senior writer Myrna Anderson about Solzhenitsyn.

What was the biggest influence Aleksandr Solzhenitsyn made on Soviet life and culture?

He de-legitimized the Soviet experiment—that was an experiment in utopian thinking to create the new man. He identified the ideology, not power, as the root issue of the Soviet issue and showed that it was anti-human and really false to the nature of human beings and to the nature of the universe. In other words, Marxism, Leninism was not just one ideological option among many. It was the wrong ideology.

How were you inspired to focus so much of your scholarship on Solzhenitsyn?

I thought that he told the truth in literary form about human nature and the nature of the universe. When I first read him, I didn’t know what he believed. I didn’t know he was a Christian. He hadn’t made that explicit. I thought at the time that either this man is a Christian or he might as well be. Everything he says about human beings and the universe, the moral order that pervades the whole universe, is what Christianity propounds. … We’re familiar with worldview talk, and that’s what I saw in Solzhenitsyn, lurking in the background as the context for the way he handled human beings and their actions. From Stalin all the way down to the simplest peasant, all lived in the same moral universe.

What were your impressions of the author when you met him?

He was much more friendly and open that I could expect him to be, and I could tell you that lots of people have had that impression of him. He stays off to himself, so he’s called reclusive. He’s been known to be very prickly. He found in the west that everybody deals in a cash nexus basis. You do something, and you are expected to pay for it. He doesn’t like that. The way I got really deep in his good graces is I said, “I do not expect any reward for my work as an abridger” … . He has been difficult to deal with in various cases. But when he feels a kind of natural bond with somebody, he is very warm and open, a social man, and yet, that is not the common image of him.

Solzhenitsyn endured military service, cancer, censorship, imprisonment and exile? How do you explain his resilience?

We develop our spirit over a lifetime. One thing leads to another. He has practiced perseverance and fortitude. And it becomes a habit of mind and of life. I don’t know how you explain those things, but “resilience” is a great word to use for him. He’s an overcomer ... .  There was an early line from him, “No one can bar the road to truth, and to fulfill my mission, I am willing to risk even death.” That’s the kind of courage you need to develop the kind of resilience of spirit you’ve identified.

What was Solzhenitsyn’s relationship to the political leaders in Russia following his return?

We talk about oligarchy. But nobody knows that Solzhenitsyn was the first to use that term. The more he talked to the members of the Duma, the less happy with him they became … . He’s had a mixed relationship with Putin. That means that he appreciates some things that the western elites seem unable to appreciate. Putin restored a sense of pride among Russians that they were not a downtrodden people, headed toward third-world status. He provided a sense of leadership that the Russian people need. But he is much too authoritarian. In the west we see Putin as almost all evil, and that’s much too black-and-white for Solzhenitsyn. He is more tempered in his view of Putin.

Over the years, critics have questioned Solzhenitsyn’s relevance to politics and to culture. This past spring you presented a paper at Calvin’s Festival of Faith and Writing titled “The Enduring Achievement of Aleksandr Solzhenitsyn.” What are your thoughts on Solzhenitsyn’s literary and political legacy?

In the west we approach everything through politics, and he (Solzhenitsyn) says that’s the wrong way to approach him. On the other hand, he helped to bring down the Soviet Union, and that’s huge. What other writer in history ever has had that effect on the history, not politics, of his own time? …

In literature, only time will tell what his effect is. I think that he will go down in the cultural history of Russia as a hugely important literary figure. But we can hardly give a definitive verdict when his main work is 5,000 pages long, dwarfing Tolstoy’s War and Peace, and most of it is not available in the major languages of the world. That work is The Red Wheel … . It’s going to take a generation to give a just account of the value of that work. From Samuel Johnson we get the standard that the test of a literary classic is that it survives for 100 years. That’s why I say time will tell. My prediction is that when 100 years have passed, Solzhenitsyn will be safely installed in the hall of fame of Russian literature. But it’s safe for me to make that prediction, because I won’t be here to see. 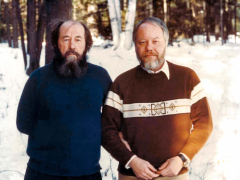 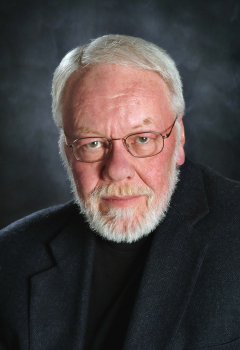 More on Ed Ericson and Solzhenitsyn

Thoughts on Faith and Writing: The Enduring Achievement of Ed Ericson

Minds in the Making: On the Launch of The Solzhenitsyn Reader: New and Essential Writings, 1947-2005