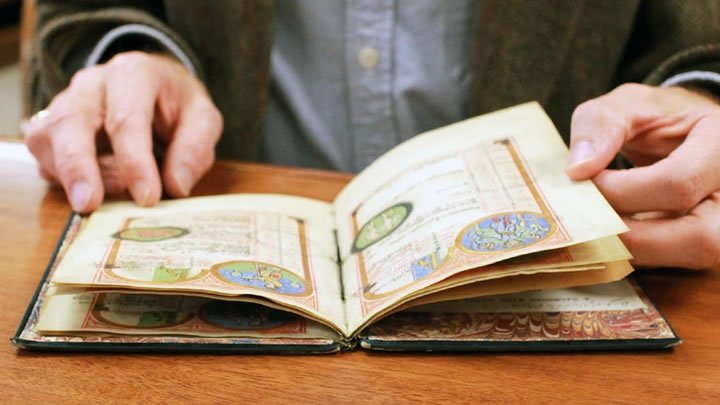 This manuscript is the calendar section of a prayer book that dates back to circa 1200 A.D. It was given to Calvin College by a local businessman in 1912.

Tucked safely away in a climate-controlled space in Calvin College’s Meeter Center is a medieval devotional manuscript the college has owned since 1912.

It recently became an object of deeper interest to Frans van Liere, professor of history and a medieval studies specialist, when he needed an image to use as the cover art for his 2014 book, “An Introduction to the Medieval Bible.”

The cover art Van Liere selected from the medieval manuscript was a miniature of the angel Gabriel visiting the Virgin Mary to announce the birth of Jesus, which is the only full-page picture in the manuscript.

“It led me to say maybe I should know a little more about this manuscript,” Van Liere said. “So I started looking into the manuscript, doing an analysis of the handwriting and the dating, and I discovered it’s a much greater treasure than Calvin probably thought they had.”

At this point, with the help of students Dan Wagner and Jeanette Bigelow, Van Liere dove into research to try to figure out when the manuscript was created, where it came from and how it came to be in the possession of Grand Rapids businessman Thomas Peck, who gave it to Calvin College in 1912.

When the manuscript was created

Close observers of the artwork in the miniature of Gabriel and Mary can see the fingers are elongated and the eyes are abnormally large in proportion to their bodies.

“That is typical of 12th century German art,” Van Liere said. “That gave me a clue. The style told me that this was much older than initially thought, and possibly German. So I started reading the text.”

The text, which is written in Latin, shows the manuscript to be a liturgical calendar that was originally part of a psalter. While the psalter itself is missing, the calendar can tell medieval historians plenty.

Van Liere kept digging. A handwriting analysis showed the original had been written around 1200, and the newer handwriting, which sometimes trespasses onto the margins of the page, is a few decades younger.

To date the writing, Van Liere said one of the clues he looked at was the color of the ink. The older ink was brown, and the younger ink was black. Also, the S’s and F’s in the older hand stood on the line, while in the newer hand they dipped under it.

Where it came from

Van Liere discovered that the seven-page fragment—called a quire—most likely came from the Diocese of Cologne, as many of the saints’ days on the calendar were for saints that were specific to that region.

“Every single bishopric, every diocese had its own specific sets of saints that were venerated in one particular place,” Van Liere said.

How Thomas Peck came to own it

Thomas Peck, a Grand Rapids pharmacist and land speculator, was a collector of antiquities and manuscripts.

Student Jeanette Bigelow found that at one point, Peck went on a grand tour of Europe. Van Liere said that is probably when and where Peck picked up the manuscript, deciding to make it part of his collection, then later gifting it to Calvin College.

What we can learn from it

Aside from its monetary value, which Van Liere estimates to be about $70,000, the manuscript imparts priceless historical value to the Meeter Center and to Calvin students.

“It’s an object that attests to the Christian faith of people living around the year 1200,” Van Liere said.

Van Liere said that despite its delicate condition, he loves to let students view and carefully handle the book.

“The fun part of having the manuscript at Calvin is teaching with it,” he said. “I have used it many times in classes to show what you can learn by the combination of classical studies, medieval studies and art history. It’s those three disciplines that teach us the most about this manuscript. And teaching with an 800-year old artifact gives students a sense of proximity to the past.”