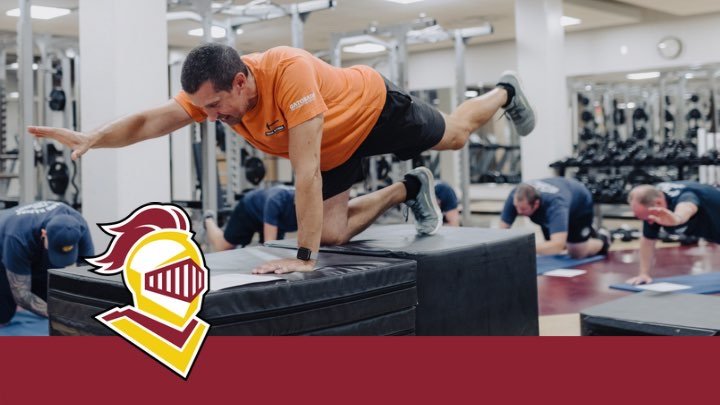 Kinesiology professor John Sparks demonstrates an exercise during a workshop with the Grand Rapids Fire Department.

“Ever since high school I’ve been drawn to the idea of being a firefighter,” said Daniel Wunder, a senior exercise science major.

What drew Wunder to Calvin initially would eventually draw him closer to his dream.

Besides Calvin being close to home and providing an opportunity to play college soccer, “I knew Calvin professors greatly invested in students,” said Wunder. “I sat down with Professor Sparks and expressed my interest in being a fire fighter and trying to figure out how to tie in my degree with that job,” recalls Wunder.

While Sparks’ background is in strength and conditioning and sports performance and he has several certificates in this area, he recently got a certification through the National Strength and Conditioning Association meant to prepare and train tactical employees, such as military and fire fighters.

He then remembered Wunder’s desire and pulled him into a project that would provide the Calvin senior with invaluable experience and connection.

“Professor Sparks went out of his way and engaged in something that I am personally interested in and that he has experience in and he worked with me individually to help me become better, more prepared for something I would like to do,” said Wunder.

Sparks reached out to the Grand Rapids Fire Department (GRFD) to better understand their needs and how Calvin’s kinesiology department could come alongside them in meeting their them. After consulting with her fire department personnel and the city of Grand Rapids’ wellness director, GRFD Battalion Chief Kathy Thompson knew what they needed most.

“Professor Sparks developed the training specifically for us after meeting and offering his services,” said Thompson. “Firefighting is very hard on backs and shoulders and this training was designed just for us. It was fun and applicable.”

Wunder and Sparks led the workshops “Bomb-Proof Backs” and “Unshakeable Shoulders” together. “I took a group and walked them through different exercises, explained why these exercises are important and how they are beneficial as it applies to their job as firefighters. The time involved instruction and demonstration.”

Three shifts of volunteers, 42 people in total, went through the training. Thompson hopes this will have ripple effects in GRFD. “The workshops included a little lecture, a little testing, and a lot of exercises that we can bring back to the fire station and continue on our own.”

“They [fire fighters] are out there putting themselves in harm’s way, they are the first responders at accidents most of the time and at fire/water rescue,” said Sparks. “So, it’s cool to be in a small way part of what they are doing and be able to help do what they are doing a little better and a little safer.”

And Sparks is also helping students like Wunder along the way.

“He’s made some connections with the firefighters there in helping out with this program which will be valuable for him as he gets ready to try and join one of the new recruiting classes coming up in the next year,” said Sparks.