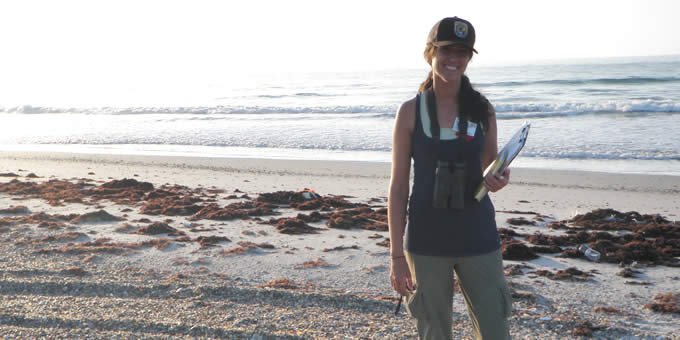 Amanda Hoffmeyer landed an internship with the U.S. Fish and Wildlife Service while still a student at Calvin and before April 20, the date that changed everything in states bordering the Gulf of Mexico: the date an explosion on a BP offshore drilling platform killed 11 workers, injured 17 others and set off the world’s largest oil-spill disaster in history. The BP oil spill significantly altered Hoffmeyer’s first few weeks of work, too.

"While none of the wildlife is oiled here,” said Hoffmeyer of the Merritt Island National Wildlife Refuge on the eastern Florida shore, “we are still doing assessments for legal reasons.”

After two weeks of training, Hoffmeyer spent 15 hours a day walking the Florida coast, performing a live-bird assessment and documenting any dead birds. “They wanted a baseline for what was the natural mortality of shoreline birds for comparison,” she said. Hoffmeyer and other crew members secured the dead birds as possible future evidence.

Because of the intense nature of the work, crews were only assigned the duty for two-week stints.  Hoffmeyer is now back to protecting the nests of endangered sea turtles and seeking out exotic plants.

Before Hoffmeyer started her half-year internship, she had never heard of Cogongrass, Guinea grass or Brazilian Pepper; now she sees it in her sleep. The 2010 Calvin biology grad spends the better part of some days on the lookout for the exotic plants, destroying the species which originate in areas outside of the United States with herbicide spray.

Other days, Hoffmeyer combs the beaches of central eastern Florida, monitoring sea turtle activity or responding to wildlife calls from around the area. “Every day I have to take a step back and remind myself to look around me,” she said. “I'm working in some of the most beautiful parts of Florida. It’s really amazing.”

"Every day is a bit different,” she explained.  Pulling a dead manatee from a lagoon, however, was something completely out of the ordinary for Hoffmeyer. “I had to go in the water next to it and put a rope around its tail,” she said. “I had my face in the water right next to it, and it was probably the grossest thing I’ve ever smelled or seen.”

The carcass of the manatee, an endangered species, was delivered to the biological station at the Kennedy Space Center for future research, she said. “Because it’s a protected species, they like to determine the cause of death, that kind of thing,” she added.

Hoffmeyer has other opportunities to work with onsite wildlife biologists, too. “It’s a unique opportunity,” she said. “It has more than exceeded my expectations. The people here really try to engage you with everything that’s going on in the refuge; they teach you how it runs. It’s a great experience.”

And one that Hoffmeyer feels that she was ready for.  “I think that my work ethic is definitely seen as a strength; I’m pretty self-sufficient in work tasks.”

Calvin biology professor David Warners isn’t surprised with Hoffmeyer’s ability to jump right in to projects. "Calvin is increasingly becoming known for producing students like Amanda, who have a solid grounding in ecology coursework, as well as lots of practical experience in research and management,” he said.

Biology professors offer numerous ecological research opportunities to students, according to Warners. "This has translated into many of our students moving on into graduate programs in the areas of ecology, restoration and conservation.  We are starting to see students who are drawn to come to Calvin specifically because we have so many opportunities like these available.”

Hoffmeyer also has been able to apply some of what she has learned about community-building. “Calvin taught me to see a community wherever you are, that it’s important to be a part of other people’s lives and make an impact—and they can do the same for you.”

Hoffmeyer’s community here will last through the end of the year, when she will be seeking another opportunity before starting graduate school in the fall of 2011. “I’d like to transfer to another refuge or national park, try a new habitat. I’m not sure, but I’m eager to see what life brings me.”

On May 8, 2010, Amanda Hoffmeyer ran the 10K in the Fifth Third Riverbank Run to raise money for fellow student, Stephen Okeyo. 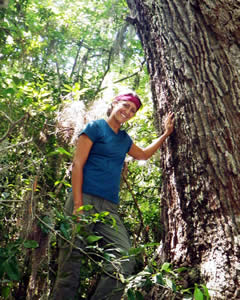 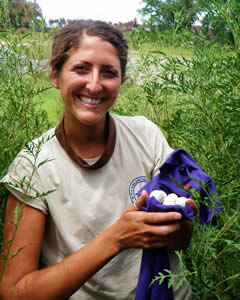