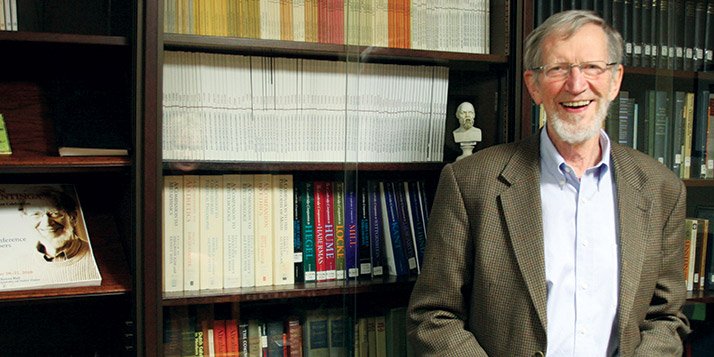 Alvin Plantinga was named a 2012 winner of a prize that honors the systematic study of philosophy.

In November, Alvin Plantinga, a 1954 Calvin graduate and professor emeritus of the college’s philosophy department, was named a winner of the 2012–2013 Nicholas Rescher Prize for Contributions to Systematic Philosophy. Created in 2010 by the University of Pittsburgh and named for a member of that institution’s philosophy faculty, the prize recognizes a lifetime of achievement in systematic philosophy.

“Over the span of his stellar academic career, Alvin Plantinga has inspired, trained and counseled an entire generation of fine Christian philosophers,” said Calvin philosophy professor Lee Hardy. “And he has provided them and all of us with a good example: unashamedly defending the propriety of religious belief in often hostile intellectual environments.”

The Rescher Prize (which comes with a $25,000 award and a medallion) is the latest in a series of honors for the author of, among other works, God and Other Minds, The Nature of Necessity and Warranted Christian Belief and two-time Gifford Lecturer.

Born in Ann Arbor, Mich., Plantinga began his academic career with a semester at Jamestown College in North Dakota, where his father Cornelius taught both philosophy and psychology. When his father moved to Calvin in 1950, Plantinga moved there too for a semester—and then to Harvard University. “I liked it a great deal,” he said of the latter institution, “and I met a great many people of a different sort than I met at Calvin.”

Because his new and old colleges operated on different schedules, Plantinga was able to sit in on three classes taught by Calvin philosophy professor Harry Jellema:

Plantinga reenrolled at Calvin and studied alongside future colleagues Nicholas Wolterstorff and Bill Alston. He graduated Calvin in 1954 and moved on to The University of Michigan, where he earned a master’s in philosophy and then to Yale, where he earned his PhD. His first teaching job was at Wayne State University, where he was the only Christian in his department. “When I started out in philosophy, there weren’t many Christian philosophers, and the ones there were kept their heads down,” he explained.

In those early years, Plantinga began the investigations that would shape his career: “I’ve been interested in, basically, the philosophy of religion and whether Christian belief is irrational or warranted, and I’ve been answering criticisms of Christianity,” he said.

One of the first things Plantinga came up with was the free-will defense, an answer to those who argued that a benevolent, all-knowing God could not co-exist with an evil world. He argued that God, though all-knowing and all-loving, could create creatures with free will that would allow them to choose evil.

“A lot of people thought I was crazy, but it didn’t bother me very much,” Plantinga said of his work. He returned to Calvin in 1963, to join a philosophy department that included Nicholas Wolterstorff, Clif Orlebeke, Peter DeVos, Ken Konyndyk and Evan Runner. “We were very close and discussed and argued philosophy a lot,” he said. “It was a great time.”

During his time at Calvin, Plantinga made various arguments for the rationality of religious, and specifically Christian, belief. He also wrote many of the articles and books that earned him a reputation as one of the world’s foremost Christian philosophers.

And he taught: “I’ve always found teaching exciting, engaging and scary, he said. “It’s scary and exciting because you never know how a given class session is going to turn out. One day it will go really well—students really interested, lots of give and take, and afterwards you feel exhilarated. Another day it goes really badly—nobody’s much interested, everybody looks bored, some people go to sleep, and you can’t wait for the class to end.”

Early in his marriage, while driving through North Dakota on his first trip west to his wife Kathleen’s home in Washington, Plantinga discovered a new passion: the mountains. “I was just swept away,” he said. “My father-in-law stopped me from driving because I kept hanging my head out the window.” The fascination has lasted a lifetime. “I started out liking the mountains, and then I started climbing the mountains,” he said. “They have a sense of mystery to them and also a sense of danger and are totally attractive.” He has climbed Mt. Whitney, Mt. Ranier, Mt. Baker (“a dozen of times”), the Grand Tetons “a couple of times” and the Matterhorn. These days, he sticks to the Calvin climbing wall: “It doesn’t require as much endurance,” he said.

While teaching at Calvin, Plantinga also taught graduate seminars at Notre Dame. In 1982, he moved to that institution as the John A. O’Brien Professor of Philosophy. Many of the people he has mentored, at Calvin and at Notre Dame, went on to teaching careers in the field. And many of that group went on to teach at Calvin.

“It would be very difficult to exaggerate the impact Al has had both on the profession of philosophy and the lives of younger Christian philosophers,” said Corcoran, who studied with Plantinga at Notre Dame. “Christian philosophers of my generation and younger would likely not be doing what we’re doing and the way we’re doing it, were it not for the pioneering work of Al Plantinga.”

Plantinga was a John Simon Guggenheim Memorial Fellow from 1971–1972. He was elected a Fellow in the American Academy of Arts and Sciences in 1975. He served as president of the American Philosophical Association, Western Division, from 1981-1982 and as president of the Society of Christian Philosophers from 1983-1986. He has honorary degrees from Valparaiso University, the Free University of Amsterdam, Brigham Young University, North Park College and the University of Glasgow.

He and Kathleen have four children—Carl, Jane, Harry and Ann—and six grandchildren.

He considers Calvin his intellectual and spiritual home. And in 2011, he was named the inaugural holder of the William Harry Jellema Chair in Christian Philosophy.

Plantinga is writing a shorter, more accessible version of Warranted Christian Belief and another book based on a graduate seminar he taught at Notre Dame. In the spring, he will co-teach a class with Hardy. “I like teaching, and I’m not quite ready to hang everything up,” he said.

Plantinga is one of two winners of this year's Rescher Prize. The other honoree is German philosopher Jürgen Mittelstraß.