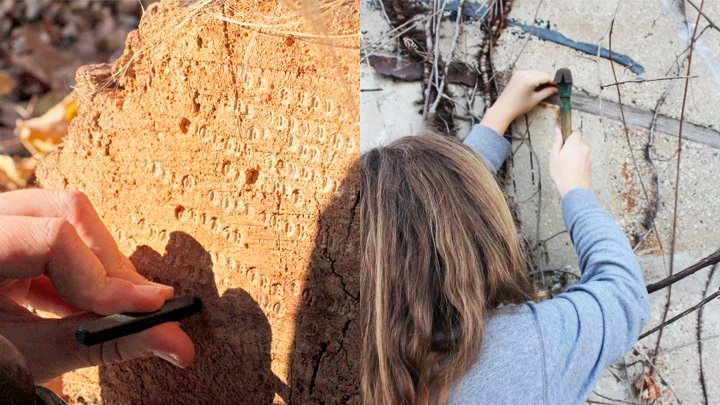 With a well-worn piece of paper covered in words, a backpack stocked with a hammer and 1/8” metal stamps, and a camera, Gabrielle Eisma took off on an adventure.

For Eisma, a junior BFA in Studio Art and writing double major at Calvin University, this experience wasn’t out of the ordinary.

“I was only indoors about 10-percent of my day growing up, so I was usually covered in mud.”

This was just her next expedition, and it stemmed from one of her first graphic design classes at Calvin.

“In that class we were asked to respond to a book or narrative of our choice, to transpose some of the things we were worried about or an opinion we had into narrative form using graphic design,” said Eisma. “This year, in a more advanced class, we were tasked to take what we learned in that [initial] class and to now make something for the public sphere.”

In a typical year, students would be creating for an indoor gallery space, but this year Eisma needed to think outside the box.

“I carry around a lot of notes that mean nothing outside of my head,” said Eisma.

One of her ideas … seemed to stick.

“This idea is probably sitting in a gum wrapper somewhere in my room,” said Eisma.

“I was thinking of this idea of call and response. As someone who has been immersed in the Protestant tradition my whole life, I went to Northern Ireland with the Artist Collaborative, and it was my first encounter with the Catholic tradition and seeing written out prayers and stations and journeys as part of your worship,” said Eisma. “So, I was thinking of that experience as well as recalling the thrill of seeing a park near my house packed with people this summer, some who were discovering for the first time a place I know well.”

It was the intersection of those two ideas—understanding new forms of worship and a desire to guide people to discover new things—that sparked Eisma to create something new.

Her project, called Re:ground, has been described as a “poetic geo-caching experience.” She enlisted 16 local artists to write poetry with the prompt of thinking of their poem as a part of a larger collection, expressing the grief and joy of the earth, as a voice speaking for the ground beneath our feet.

“Their [the poets] ability to show the empathy and courage the ground has in holding us and being able to show this deep, aching expression was fascinating for me to see,” said Eisma.

Eisma took each short poem she received in her email inbox and transcribed it onto that grungy piece of paper—a temporary holding place. Once she had all of the poems in hand, she literally took the words and applied them to her childhood experiences using a hammer and 1/8” die stamps.

On a downed log, on a tree trunk, under a fishing dock, on a culvert, on a silo … if the poet did not specify a location to place the poem, Eisma would use her interpretation of the poem and allow it to live near a place that holds significance in Eisma’s life.

“This is where we used to pretend we could do backflips off swing sets,” said Eisma. “This is where we used to watch Grand Rapids fireworks.” Eisma even had her younger sister, Gwyneth, write one of the poems, and she told Gabrielle exactly where she thought it should go. “My sister knew her poem belonged at the Gypsum mines. She remembered our conversations about the history of the place, and our days spent there, our little illegal playground--but the fact she can put her own poem in a place that’s meaningful for her, that gave me an eye of what poets are thinking too.”

So, as Eisma carved the poetry into nature, she did so with great thought and care. “I tried to be mindful of the places I picked. I read through the poem six to ten times in a row, feeling the rhythm, thinking into the story behind the poem,” said Eisma.

Written into the landscape

The poetry now rests in 16 different places throughout West Michigan from parks to parking lots, near gardens and playgrounds, churches and community centers. They aren’t on billboards and are not meant to be seen by many.

“I want someone to have an encounter that they wouldn’t have had perhaps alone in a book or in a grand communal space like at a poetry reading or something,” said Eisma. “I think it’s possible for the poems to be found accidentally, but there also has to be a part of you that is seeking it out, part of you needs to be looking to discover something.”

While much of the art is still able to be found, some has been partially washed away by the elements. “I was watching these poems morph into their landscape and take hold of it and become part of it,” said Eisma, “and I had this idea that maybe not all art has to be shown. Maybe art can be something that is interlaced with story, and sometimes more for the place itself than for the people … something I still need to think through.”

While she thinks this through, Eisma will continue to discover new things and tell new stories. And she says she’ll do all of this work with the consistent “bass drum” of Christ-centered learning helping her march on.

It seems to be both her melody and her calling.

“Stories are the way I process the world around me, and I want my work to reflect that. My ultimate goal as an artist is to be a storyteller worth listening to.”

“It’s an incredible community, I’m not sure I’d be able to navigate the arts without it. I can’t imagine my college experience without it, especially the way I create now,” said Eisma. “You have this community of creative people who want to challenge you, but they are like-minded enough to say—this is where we’ll challenge you, and this is where we’ll encourage you.”

“It’s a group of people that just gives. They give of their time, talent, thought, and wisdom. The community that they form and the way they push back out and create new communities because of their talent is really unique.”

Learn more about the Artist Collaborative.