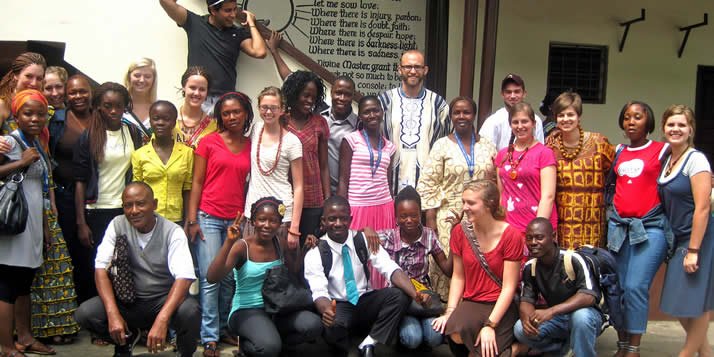 For five years Calvin faculty have been pioneering the first bachelor of social work program in Liberia.

Joe Kuilema was teaching a social work class in Liberia in 2009, and he assigned his students to do a community assessment, identifying the strengths, weaknesses and opportunities for development in their neighborhoods. It is an assignment he regularly gives his students at Calvin, who always turn in academic assessments. The Liberian students took a different approach. “They came back and said, ‘Well, we got 400 people together, and we’re going to build a community latrine this weekend,’” he recounted. “What was great as a teacher was seeing students apply their learning right away.”

Kuilema is one of a team of Calvin faculty—social work professors Beryl Hugen, Rachel Venema, Kristen Admiraal, sociology professor Cheryl Brandsen and anthropology professor Mwenda Ntarangwi—who have worked for five years to develop a bachelor of social work (BSW) program in Liberia: the first of its kind in a country ravaged by back-to-back civil wars. To build the BSW program, the Calvin professors partnered with the faculty at Mother Patern College of Health Sciences in Monrovia and social work professors Judi Meerman and Greg Scott from local Kuyper College.

“We all know that the students who are studying in this new BSW program are going to make a big difference in their country,” said Venema.

Liberia was beset by internal conflicts from 1989 through 1996 and from 1999 through 2003. “The place is decimated. At least it was in 2006,” said Brandsen, Calvin’s dean for social sciences and contextual disciplines, who first traveled to the country that year. She saw the bombed-out luxury resorts that lined the oceanfront. She saw former child soldiers driving motorcycle taxis.

“I had never seen so much ruin, so much poverty,” she remembered. “There were no paved roads, no running water, no stoplights. All of the infrastructure had been destroyed.” Brandsen was in Liberia in 2006 at the request of Bob Reed, a former Calvin staff member who was working there through the Christian Reformed World Relief Committee (CRWRC). Reed believed there was a need for a formal social work program in Liberia, and he asked for Calvin’s help.

With Reed, Hugen and Meerman, Brandsen visited Mother Patern, a Catholic institution offering programs in nursing, laboratory technology, biology, health systems management and health education. The college offered an associate’s degree in social work, but the program didn’t provide the training social workers receive in the states and elsewhere. “A number of the students were already working in what we call social work jobs, but they had absolutely no training to do that, and they were floundering,” Brandsen described the situation at Mother Patern.

Eleven years of civil war had also multiplied the challenges for future Liberian social workers. Throughout the conflict, rebel soldiers had invaded villages and forcibly recruited children to fight with them. Rape and other violence against women was common. In the aftermath of the conflicts, Liberia was left with not only the problems of rebuilding infrastructure and developing workable social policy, but also managing HIV/AIDs and re-integrating child soldiers into society.

“A lot of these child soldiers, grown up now, drive these scooters around Monrovia now,” Brandsen said. “It’s not at all unusual, walking down the street, to see someone who killed their family.”

During that first 2006 trip, all involved agreed that a social work program was vital to the re-building of Liberia. The Calvin and Kuyper faculty worked with Joe Kpukuyou a social work professor at Mother Patern and Sr. Barbara Brilliant, the dean of the college to create a structure for the curriculum. They also identified potential internship sites for Mother Patern students and formed relationships with key government officials.

The curriculum the team put together (much of it accomplished via email) was loosely based on Calvin’s. “There was a tendency for the faculty at Mother Patern to copy what we did here, and we had to resist the impulse to just put our structure into place, which would have been far easier,” Brandsen said. “Instead, we all tried hard to think about how the large principles of social work translated into a Liberian context—and especially their unique and horrific experiences with the wars.”

The resulting program was designed to help social workers deal with trauma issues and to facilitate community development. “They don’t have all the hoops and hurdles we have here at Calvin for starting new programs and offering new courses,” Brandsen said. “They just did it.”

The first cohort of around 20 BSW students enrolled at Mother Patern in the fall of 2008. From the time the BSW program launched, Calvin social work professors have taken turns traveling to Liberia every summer to nurture it. “My students were very lively in class and were excited to discuss the issues …,” said Admiraal who first taught at Mother Patern in 2009. “In fact, it was difficult to get through the course content because we’d have these great discussions about end-of-life issues or whether it was appropriate to pray for a client.”

Kuilema taught two successive terms of community development and a 2010 interim class at Mother Patern. He noticed that Calvin students on the interim were surprised by the classroom atmosphere at Mother Patern: “The Mother Patern students love to engage in heated discussions of policy and practice, both inside and outside the classroom,” he said. “I think some Calvin students initially misinterpreted this as animosity or felt intimidated by it, as classrooms at Calvin aren’t always so animated. By the end of class, however, I think they understood it more for what it is, a passion for learning and a really expressive oral tradition for learning.”

Along with teaching, the Calvin and Kuyper faculty also supplied the BSW program (which is funded, in part, by a grant from the Richard and Helen DeVos Foundation.) with books, a van and other supplies. As they’ve worked the team has grown increasingly aware of the impact their students may have on their country: “Their class is going to be the first class of BSWs in Liberia. They are going to be developing what it means to be a social worker in Liberia,” said Admiraal.

The Calvin team never intended to continue teaching at Mother Patern indefinitely. Now that the curriculum is developed and the resources are in place, they are developing people to take over the pedagogy. “Slowly the responsibility for teaching and securing resources is shifting over to Mother Patern,” Brandsen said.

Two months ago, Kuilema, Venema and Admiraal traveled to Liberia to attend the first commencement exercises for the BSW students. “Being involved in work of this magnitude is very humbling,” said Venema. “In many ways I feel like I am here to witness the work already done.” 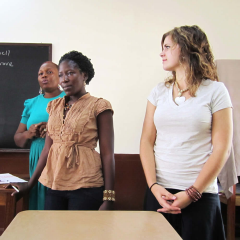 A classroom at Mother Patern College 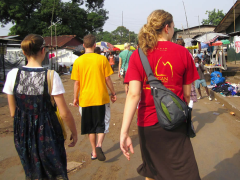 An interim class in Liberia 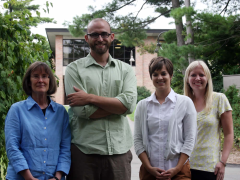