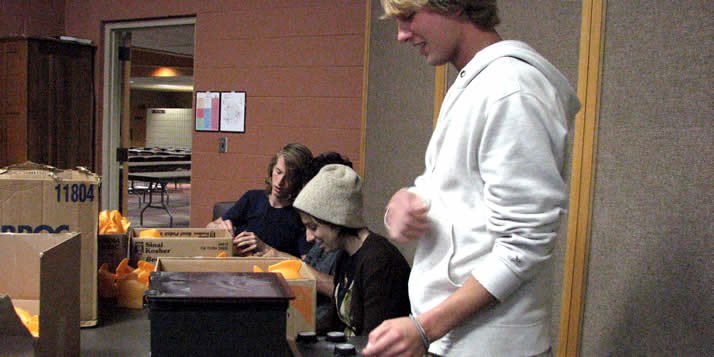 At LOFT, Peter Fish were distributed as a campus-wide effort to raise money to combat world hunger.

It’s the time of year for the color orange: The leaves. The pumpkins. The Peter Fish …

The Peter Fish—an orange plastic fish bank—annually invades Calvin’s campus late in October during World Hunger Week, this year held the 12th through the 19th. The people who distribute the fish, members of the Social Justice Coalition (SJC) in partnership with the Christian Reformed World Relief Committee (CRWRC), hope to raise awareness of and money for world hunger.

On Oct. 12, SJC members passed out about 500 Peter Fishes at the Living Our Faith Together (LOFT) service. Students are encouraged to put them where they live, work and study and fill the banks with their spare change. The fish will be collected at the Nov. 2 LOFT service.

The campaign will culminate with a “Broken Bread” meal at 6 p.m. on Tuesday, Nov. 4, in the Chapel Undercroft. The meal will consist merely of bread, and the students are encouraged to fast for all or part of the day leading up to the event.

Student groups working on the event, including the InterVarsity Mission Fellowship and International Health and Development organizations, will also be emphasizing AIDS awareness through the event, which will feature an individual’s struggle with hunger or AIDS.

Co-chair of the SJC, senior Rebecca Garofano, said that organizers hope the meal will get event-goers thinking about issues of hunger and poverty. “I think it is a great opportunity for students to give direct support to an organization that is doing some really great things in the developing world,” explained Garofano.

To generations of Christian Reformed children the Peter Fish—inspired by the biblical story of the apostle Peter using a coin taken from a fish’s mouth to pay taxes—is highly recognizable. Churches in North America have been distributing Peter Fish to collect money for world hunger for decades.

The Peter Fish Campaign at Calvin has existed since 2004. To Garofano, the campaign is effective: “Students are familiar. It’s a simple idea,” she said. 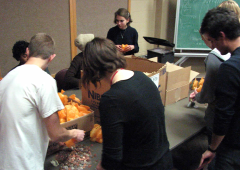 Members of the SJC count donations from World Hunger Week

A certain orange school of fish has collected a sizeable donation to combat world hunger.

This year’s Peter Fish Campaign raised $1,235 for the CRWRC. The campaign culminated last Sunday, Nov. 2, when the plastic banks were collected at the Living Our Faith Together (LOFT) service. The banks had been floating around campus since Oct. 12.

The Peter Fishes were handed over to members of the Social Justice Coalition (SJC), who counted the donations on Thursday, Nov. 6 in the Chapel Undercroft. The group of 20 SJC members turned a seemingly daunting task into a social event, ordering pizza and playing music. They also borrowed a “money counter” from Financial Services; it didn’t work.

The students counted the money by hand and finished in about two hours. Dan Hooley, an SJC co-leader, admitted to losing count a couple times. The process went swiftly, however, he said, laughing.

Hooley considered this year’s Peter Fish Campaign a success in dollar signs, and also in raising awareness about hunger: “It’s good having an event that draws attention to this issue, amidst their (students) studies and social activities.”