Party at the Prez's kicks off Homecoming and Family Weekend

On Friday night, the “first dog” of Calvin, Gus Le Roy, sat in what would normally be his quiet backyard. But on this night, the expanse between the DeWit Manor and the Calvin Seminary pond was anything but quiet as crowds of people gathered for a special celebration. Of the many Homecoming and Family Weekend 2013 events that took place on campus October 18 through 20, Friday night brought one of the most memorable: the first ever Party at the Prez’s.

The evening featured the college’s traditional Cardboard Canoe Race, a campus fierljeppen (Dutch pole vaulting) competition, a showing of Despicable Me 2, Uccello’s pizza and s’mores, and the Senior Only Sleepout and pancake breakfast.

Junior Lauren DeGroot said she was most excited about the fierljeppen showdown. DeGroot, a member of the Student Programming Team helped to plan Party at the Prez’s as one of the year’s Buck Fridays. This was the first year that fierljeppen joined the Cardboard Canoe Race for a schedule of back-to-back events at the Calvin Seminary Pond.

Among the spectators were students, families and alumni. “I’m excited for all the families to be here,” said sophomore Kristen Hoogstra, whose parents traveled to campus from Brown Deer, Wisc., to be a part of the weekend activities.

Late into the evening, seniors gathered in front of the president’s on-campus home for the Senior Only Sleepout. “Being a senior myself, I’m excited to see what tradition that this could start,” said Nicole Wilson, who camped out in front of DeWit Manor with friends she met freshman year. “It will be a nice start to this year and end of my time here.” The camp out included a bedtime story—Goodnight Moon—read by President Le Roy. 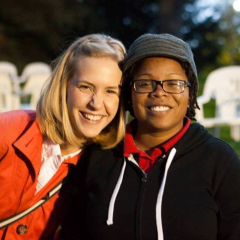 Seniors Courtney Post and J'nee John wait for the Cardboard Canoe Race competition to begin at the Calvin Seminary Pond. 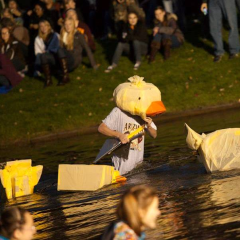 Senior Jordan Van De Walker wades through the Seminary Pond in costume after his boat succumbed to the water. 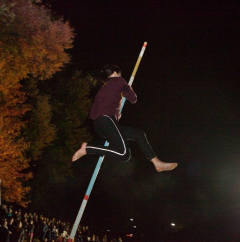 Junior Christina Geating takes a leap in the fjierleppen competition.