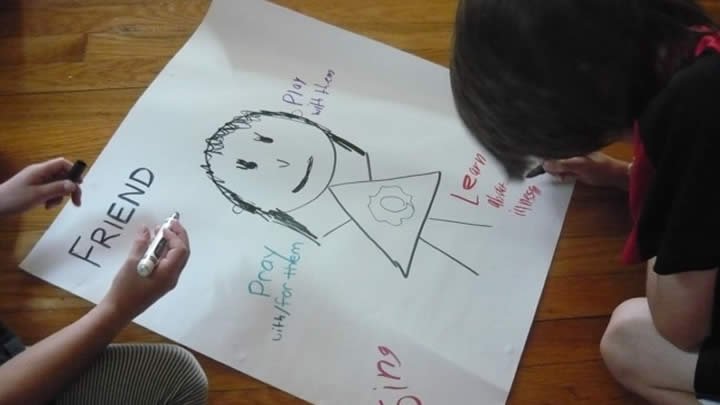 How do you explain cancer to a small child? What is appropriate to tell a child about why his or her mommy or best friend is sick all the time? Calvin College biology professor Amy Wilstermann has been working with her students and local health care professionals to develop a curriculum for younger students about cancer.

Breaking down the unknown

Wilstermann met with pediatric oncology staff at Helen DeVos Children’s Hospital to discuss how to bring this discussion to the elementary classroom. This turned into a collaboration between the hospital and Wilstermann.

A few years ago, Wilstermann and several students led a workshop on cells and cancer for one of the Grand Rapids Christian Schools. They explained to pre-K through fifth grade students how cancer cells are “cells gone bad” and discussed the science behind cancer. It was at this time that she realized that there are not many scientific resources for young children about cancer.

“A lot of the materials deal with feelings, there are not a lot about the science behind cancer,” Wilstermann remarked about current available cancer curriculum. “We want to break down some of the unknowns and give kids language to ask questions about cancer.”

Wilstermann and her student researchers have worked to develop many lesson plans that focus on the scientific aspect of cancer. One student on this team is Calvin senior Sara Conrad, a special education major with a minor in science education. Conrad herself is a survivor of pediatric cancer and has used her story to help develop the curriculum.

Conrad has helped pilot some of the lessons in area schools. “She talked about what causes cancer and told her own story,” said Wilstermann. “The kids were glued to her and everything she said.”

These lesson plans include everything for effective teaching on the topic. Included are background materials, step-by-step lessons and further resources. All lessons also include state and national science standards.

One lesson uses the analogy of baking cookies using a recipe to describe the effects of DNA mutations on cells. “We explained that the DNA instructions sometimes go wrong like a recipe gone wrong,” Wilstermann said. She said the group added extra things to the cookie recipe such as rocks and other materials to demonstrate their point.

Continued funding of the project has been a challenge, however. “We need money to fund students and to fund their time to pilot these lessons and get feedback,” said Wilstermann. “Funding agencies often like to purchase things and not time.”

Through this collaboration with Helen DeVos Children’s Hospital, Wilstermann hopes to make these lesson plans widely available and create a library of resources that could be easily accessible to teachers and hospital educators throughout the country. “Eventually we’d like to get this out on the web in a place where educators throughout the U.S. can find age appropriate material,” said Wilstermann.