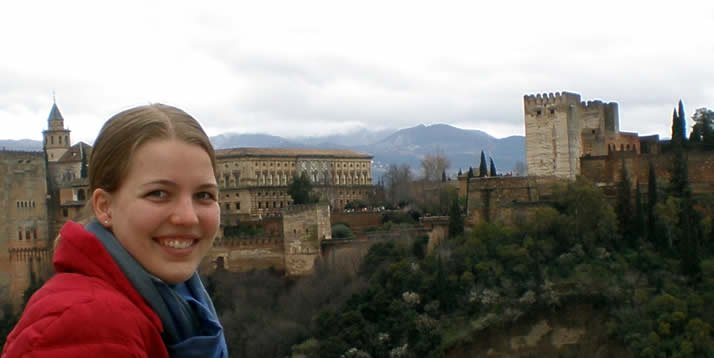 Last summer, as Cheri Ackerman was working to isolate a protein, she put in a lot of hours in the “cold room”—one of the walk-in refrigerators in DeVries Hall that are kept at four degrees Celsius (or 39 degrees Fahrenheit).

Last summer, as Cheri Ackerman was working to isolate a protein, she put in a lot of hours in the “cold room”—one of the walk-in refrigerators in DeVries Hall that are kept at four degrees Celsius (or 39 degrees Fahrenheit). Ackerman, a 21-year-old junior biochemistry and Spanish major, needed the chilly temperature to keep her solution as cold as possible so her protein wouldn’t break down. As the temp grew hotter outdoors, she would research indoors in a winter coat and wool hat.

“I started trying to time my cold-room work so that I could finish it right before lunch and then head outside into 85-degree weather,” she said. “It was like living in Michigan during December and flying to Florida for lunch every day.”

Ackerman is the latest Calvin student to earn a Goldwater Scholarship from the Barry M. Goldwater Scholarship and Excellence in Education Program. The Goldwater Scholarships, named for former U.S. senator Barry Goldwater, were established by the U.S. Congress in 1986 to fund students studying the traditional sciences, mathematics and engineering. Goldwater scholars are awarded up to $7,500 for each of two successive years to help with tuition, fees, books and room and board.

For Ackerman, the scholarship means that she gets to do more of the research she loves: “Within the first few weeks of doing summer research, I realized that I was getting paid to learn, be curious and play with biochemistry toys … ,” she said.

The Holland, Mich., native is working with Calvin chemistry professor Eric Arnoys on Galectin-3, a protein linked to various cancers and also to cellular processes both inside and outside the nucleus of the cell. “We are trying to figure out how it moves in and out of the nucleus to perform its roles and how its structure affects its ability to move or be moved,” Ackerman said.

Her research involves putting the DNA blueprint for the protein into a DNA framework that bacteria can read and use to make the protein. “The problem is that sometimes bacteria do not like the protein, so they isolate into little pockets that are hard to break open, or they break down the protein as soon as it is made, or the protein is unstable and just breaks down by itself,” she said.

“On the personal or day-to-day life side of things, the basic challenge of biochemistry research for me is patience,” Ackerman concluded. “We have a pretty good idea of the things we would love to try, but experiments take time, and you have to go one step at a time.”

Ackerman fell in love with science in the eighth grade when she learned the science behind common household appliances. She originally thought about becoming an engineer because she enjoyed applied math and the problem-solving she did in design labs. “Then I got to high school (Holland Christian) and met molecular biology. My first semester of biology—learning about DNA, proteins, cell structure—really clicked, and I decided to take advanced biology.”

Once at Calvin, Ackerman got into undergraduate research through the Van Andel Research Institute’s Frederick and Lena Meijer Student Internship.  In the summer of 2008, she worked in the lab of Dr. Jeff MacKeigan, researching PINK1, a protein that is linked to Parkinson’s disease and mitochondrial function. “I enjoyed that summer so much that I decided to keep doing research but to change my focus to biochemistry instead of systems biology,” she said.

Ackerman started working with Arnoys in 2009 as that year’s Calvin Beckman Scholar. “Once I got my feet on the ground in the lab, he stopped showing me how to do things and would send me to the literature to learn it for myself …,” she said. “If things keep going wrong or I get really frustrated, I can always ask him for advice, and when I make mistakes or do not understand something, he just shows me what went wrong.”

Arnoys turned the praise in Ackerman’s direction: “Cheri has a gift for science,” he said. “She asks insightful questions that get right to the heart of a research problem, and her lab work prospers from a healthy mix of hard work and attention to detail. I’m thrilled for her…,” he added, “but I’m not at all surprised.”

Ackerman is currently studying in Spain through Calvin's semester program. After Calvin, she's planning on graduate school in biochemistry; Ackerman wants to work on interdisciplinary teams researching infectious diseases. Meantime, she’s looking forward to a new system that will keep the cold room cold and her warm. “As long as we do not encounter any problems with this procedure this coming summer, I should be able to keep my winter coat in storage,” she said. 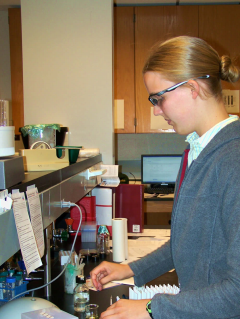 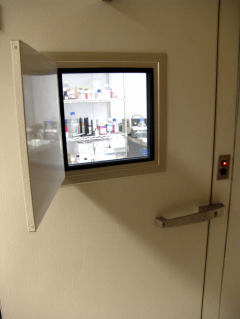