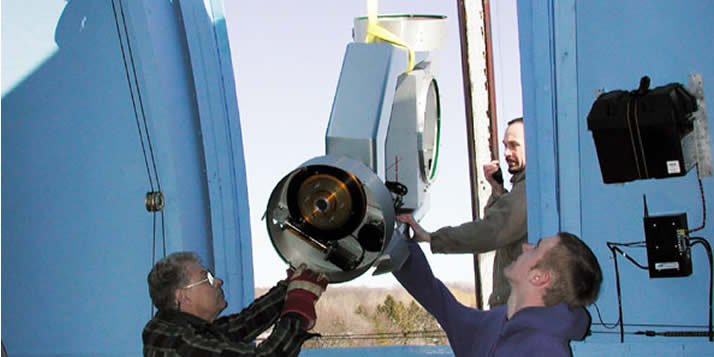 A grant of almost $130,000 to Calvin from the National Science Foundation will help pay for two new 16-inch telescopes for the school's astronomy program: one to be located at Calvin and one to be located on the campus of Rehoboth Christian School, five miles east of downtown Gallup, New Mexico. The grant begins August 1, 2002.

The unusual arrangement will allow Calvin students to both view the skies via the telescope at Calvin and to access, remotely via computer, the telescope in New Mexico, where the skies are darker, steadier (giving crisper images) and clearer (the Rehoboth site averages 280 clear nights per year!). It also will allow Rehoboth students access to a telescope unavailable to most high school students and, hope Calvin astronomy professors Deborah Haarsma and Larry Molnar, encourage more Native Americans to consider careers in the sciences. Eventually the goal is to provide remote access to the New Mexico telescope to other high schools brought into the partnership.

Haarsma, who did her Ph.D. work in astronomy at MIT, is excited about the grant and what it will bring to both Calvin and Rehoboth.
"This (remote access to telescopes) is the wave of the future in modern astronomy," she says. "In fact, in my own research work I use data from telescopes in Arizona, Hawaii and Chile. But I have limited access to them. Our students will have full-time remote access to the Rehoboth telescope. It's a fantastic opportunity."

Molnar, who has a Ph.D. from Harvard in astronomy, notes that for the average non-major taking an astronomy class the automation of the on-campus telescope will mean "more time looking through the eyepiece at the wonders of the universe and less time standing around in the cold waiting for the observing assistant to find something manually."

And the New Mexico instrument means that every individual student will have her own data to analyze during lab time, instead of having to work together in large groups or look at data obtained by the professor the previous semester.

He adds that for science majors the difference will be even more dramatic."There will be enough telescope time at Rehoboth to do extended, publishable research projects of their own," he says. "By comparison, most small colleges do not have access to a telescope at a good site, while universities that have world-class telescopes generally have to share the observing time between dozens of faculty members. Either way, undergraduate majors elsewhere have little opportunity for projects of their own."

Haarsma says that Calvin's current astronomy program wants to give students the experience of doing science. Students begin by observing the sky with the naked eye, move onto using the eyepiece of smaller telescopes and then graduate to CCD cameras attached to larger telescopes such as the school's current 16-inch instrument (which at 33 years of age will be replaced thanks to the NSF grant). Those CCD cameras make Calvin's 16-inch telescope equal, in terms of imaging techniques, to telescopes used by professional astronomers.

For example, planets in our solar system such as Saturn, Jupiter and the Moon are incredibly clear. Even pictures of Pluto, about 5.5 light hours from Earth, are clear and distinct. Indeed with the new telescope steady images of galaxies up to 100 million light years away (or 140 billion times further than Pluto) will be possible!
Haarsma says simply: "It's pretty cool."