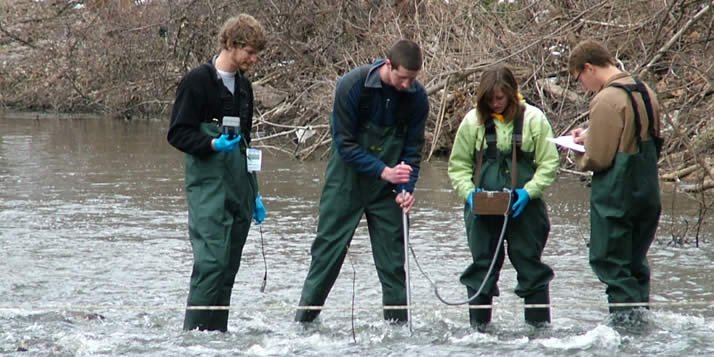 Calvin students will use the Fluidigm BioMark HD to monitor nearby Plaster Creek.

One might expect a $338,000 science grant to be able to purchase a plethora of instruments and tools for the classroom. But the recent National Science Foundation (NSF) grant procured by Calvin’s science department was just enough funding to purchase a sole instrument: the highly sophisticated Fluidigm BioMark HD.

The technical device is expected to have far-reaching benefits for research and study within Calvin’s science division. And it will also have practical implications outside of the classroom.

One group that will directly benefit from this is the Plaster Creek Stewards. The group—which includes Calvin faculty, staff and students—will use the instrument to monitor nearby Plaster Creek.

Students and faculty who monitor the creek will be able to conduct tests considerably faster and implement more sample sites because of the instrument, DeJong said.

“In one run you can do somewhere between 1,000 and 7,000 reactions, and get the data in a matter of a few hours, with much reduced setup,” DeJong said. “If you were going to do that on our conventional machines it would take months.”

A wide range of uses

DeJong was one of the chief undertakers in applying for the NSF grant. Biology professor John Wertz and engineering professor David Wunder were also involved with the grant application.

The new Fluidigm BioMark HD instrument will be used in a variety of other ways by the science department, too. John Wertz, a Calvin biology professor, studies the microorganisms in termite guts that are vital for digesting wood.

“Those communities are very complex, and there are a lot of unanswered questions about them,” DeJong said. “He’s going to be looking to use this machine to clarify some of the key players in that system and what they’re doing.”

The science department plans to incorporate the research into the science curricula.

“He [Wertz] has been studying them [phage bacteria] in termites, and I’ve been studying them in snails, and we’ve connected that with the first-year research course that we offer to students, sometimes known around here as the Phage Course,” DeJong said.

DeJong credits the NSF grant approval to the long-term support of donors, which likely helped Calvin’s application for the grant. About a year ago, private donations helped make it possible for the science department to purchase a DNA sequencer.

“I really think this is interesting how longtime, faithful supporters of Calvin have not only enabled us to get genomic sequencing here on campus, but also really helped us to get this other [new] instrument as well. I think having the DNA sequencer in our possession really helped out our application,” DeJong said.

With an average of less than 20 percent of grant applications approved for funding, NSF grants are very ambitious.

“This year it was probably closer to 10 percent because of the sequestration,” he said. “So it’s very competitive…Right now I think we, all three of us, feel really blessed to have gotten this, because funding at the federal level is very tight.”