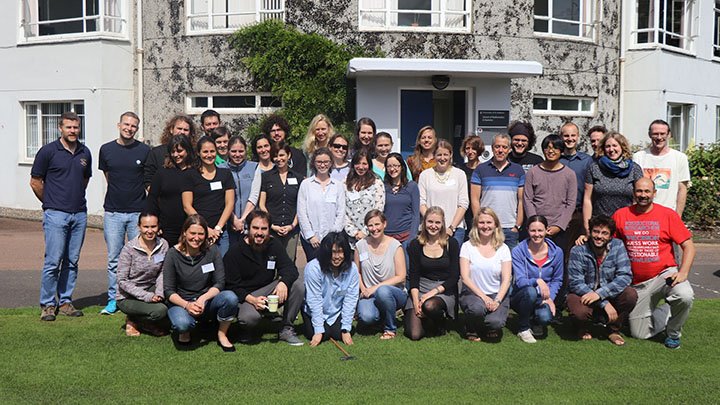 DeRuiter's team, which included two students, delivered a workshop at the University of St. Andrews in Scotland and allowed the students to develop meaningful connections with influential researchers.

“The underlying motivation of our work and research is always inquisitiveness and wonder at animal ecology,” said Stacy DeRuiter, professor of mathematics and statistics. “We can learn so much about creation by exploring.” DeRuiter has for years studied marine animals, using bio-logging technology.

“Bio-logging studies, where data on animal movements are collected using small, animal-borne devices that either store or transmit sensor data, are growing rapidly in numbers and in scope,” said DeRuiter.

As the technology advances, there are more opportunities to track longer and more frequent data sets of animal behavior. Instead of tracking the animal once every few seconds, researchers are now receiving feedback multiple times a second. However, this means there is much more data to account for and sort through, explained DeRuiter.

“While these tags offer exciting opportunities to observe animal behavior in unprecedented detail, there is a desperate need for freely available, easy-to-use, flexible tools to facilitate proper analysis and interpretation of the resulting data.”

“We thought it would be worthwhile to spend a year making better software that would be more accessible, as well as creating documentation and a workshop to make it easier for people to use in general,” she said.

Throughout summer 2017, DeRuiter led a collaborative project developing software tools for analysis of data from animal-borne movement-sensors. Her team included two students, who developed tools and delivered a workshop at the University of St. Andrews in Scotland, introducing researchers to the tools and providing hands-on practice.

Before DeRuiter made the proposal for the project she received more than 30 letters from other researchers, who would benefit from her work, in support of the idea. “It was amazing having the support of the community that really wanted this to happen but either did not have the time or funding to make it possible,” she said

This project allowed students to develop some meaningful connections with influential researchers, explained DeRuiter. “That is part of the reason I wanted them to come to Scotland and the University of St. Andrews,” she said. “They had done such great work and software development, and I wanted them to see the workshop play out.”

“The thing I enjoyed most was participating in the international workshop at the end of the summer,” said David Sweeny, a student researcher. “It was amazing to see how many different kinds of research topics from around the world are using the software functions that we have developed and translated.”

Sweeny said he is interested in this research because it gives him an insight into the lives of magnificent marine creatures during the times and in places that he otherwise would not be able to observe were it not for tags. “This research provides so many ways to learn how we can best protect these animals,” he said. “Given that I care a lot about protecting the environment, this work is really important to me.”

Opening the door to future research

“One of the most important things that the Reformed tradition tells us about being Christian is that we don’t do it alone; we do it in community. Science, for example, proceeds by the careful work of many, many hands,” said DeRuiter. “The goals of the project were to democratize this kind of research and level the playing field for those who don’t have the same mentorship, training, or funding to buy software.”

This software will help DeRuiter track whale and dolphin behavior as well as open the door for other researchers to non-intrusively explore other animal habits. “The availability of this software will only enhance the efficiency and effectiveness of current and future work being done around the world,” said Sweeny. “It will allow for increased collaboration between scientists which will have many different kinds of benefits in the future.”