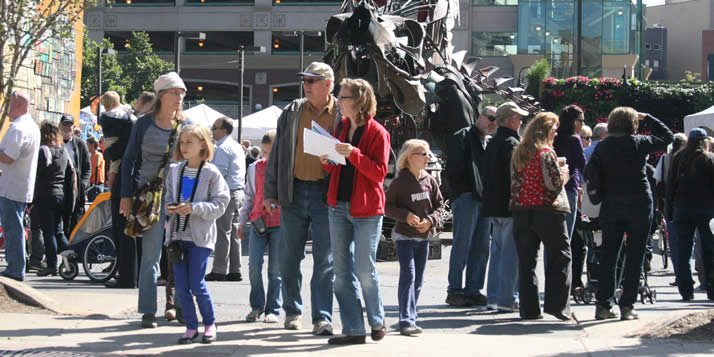 The new scavenger hunt app has more than 100 checkpoints in downtown Grand Rapids.

A typical visit to Grand Rapids for ArtPrize probably does not involve wearing a Santa hat and singing a Christmas carol to a police officer. But for the Calvin students who used the ArtPrize scavenger hunt app, the first Friday of ArtPrize was far from ordinary.

“This is our first attempt at anything like this,” said Cameron Kinney, a graduate intern for Calvin’s student development office (SDO) who is also a Calvin alumnus from the class of 2010. “We have over 100 checkpoints in the app.”

A fresh look at the city

The scavenger hunt app was pioneered by Kinney, who used Scavenger Hunt with Friends, a company which designs specific apps. The app’s colors, cityscape background and banner were all customized for ArtPrize and Calvin students.

“This is really a fun way for students to feel welcomed into the city and to experience ArtPrize,” said Paula Englin, the coordinator of student organizations and weekend programming for student development. “I know for people who are new, particularly freshmen that maybe are from other parts of the country or world, ArtPrize will probably be a little overwhelming, and so hopefully this is a really helpful tool for them to be able to check it out on their own time and have some direction.”

“The goal and intention was to get students to interact with ArtPrize and Grand Rapids in a whole new way,” Kinney said. “To go deeper than just looking [at art].”

Buck Fridays—organized by the SDO programming team—are events on weekend nights for Calvin students. For three years, SDO has organized a Buck Fridays event for ArtPrize. The Ladies Literary Club, which is located right next to the headquarters for ArtPrize, is the hub for Buck Fridays events, where students congregate for food, games and concerts. But this year’s event differed considerably from previous years.

“This year we wanted to try something new,” said Englin. “So in addition to those old pieces from the past, we’ve added in this app.”

Despite overcast clouds and the threat of rain on Friday night, some groups of students showed up at 6 p.m. to get a good start. One of those groups was the “Mighty Morph and Flower Arrangers,” a group of four seniors ready to take on the ArtPrize challenge.

“We’re still formulating our strategy at the moment,” said student Scott Strensrude. “But our strategy is to adapt to whatever comes up. We’ll probably go for some of the big points.”

“Go big or go home, that’s our motto,” said student Josiah Gorter. “I even have a bumper sticker that says that on the back of my car,” added student Alicia Driesenga.

The four seniors—who are all returnees to ArtPrize—said that the original artwork and community at ArtPrize are the main attractions.

“[My favorite parts are] the really creative and beautiful artwork, and the community,” Gorter said, “just having everyone be downtown, seeing friends, just walking around.”

Although the scavenger hunt competition ended on Friday night, the app will still be available for students to use until the end of ArtPrize.

Read a Q&A with Calvin alum Kevin Buist, the exhibitions director for ArtPrize 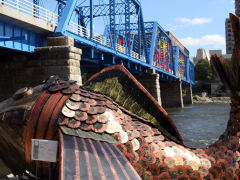 View of the Blue Bridge in downtown Grand Rapids 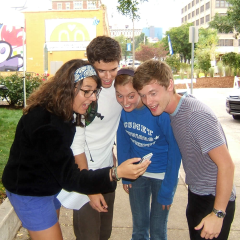 A group of students use the app to navigate ArtPrize.