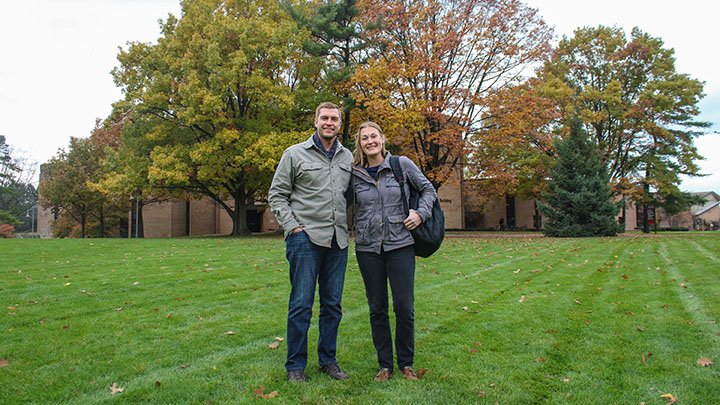 Husband and wife, Daniel and Darcy Stubbs, both served in the U.S. Navy for more than six years prior to coming to Calvin in fall 2017. The two expressed always having a sense that they wanted to serve the greater community in some way, which led them to pursue a career serving in the Navy.

Darcy Stubbs, a Michigan native and Daniel Stubbs, originally from San Diego, started off their Navy service in Great Lakes, where they first met. Their military service led the couple to a number of cities across the country and the world, but not always together. Darcy noted that the first two years of their marriage she and Daniel were stationed apart, only seeing each other every two or three months.

During her six years in the Navy, she served as an interior communications electrician and worked as part of the U.S.S. Ronald Reagan crew as well as the crew of the U.S.S. George Washington. “While I was in deployment I also spent time in Peru, Chile, Brazil and Hawaii,” she said.

Daniel served as a fire control man, working as a weapon technician. He started his Navy career as a member of the crew of the U.S.S. Paul Hamilton in Pearl Harbor, Hawaii. Daniel spent several years stationed in Hawaii and was deployed to the Persian Gulf.

Continuing education after the Navy

After the two completed their active service obligation to the Navy in early 2017, they both wanted to continue their education and pursue additional degrees, said Darcy.

Daniel said choosing a school was a big decision for both him and Darcy. “One of the first things I did when looking at colleges was to visit Forbes’ list of schools,” said Daniel Stubbs. “Calvin stuck out to me because it was in the top 100 range of schools across the country and had a great reputation. Secondly, and probably more importantly, it had the kind of environment that I wanted to be in.”

“Having spent time in two more secular institutions, where I felt like I spent the majority of my time in class defending my viewpoints, I wanted to be in an environment where I didn’t feel like I had to do that all the time,” said Daniel. “I think it is important for an academic institution to challenge your views, which Calvin does, but I didn’t want to feel I was defending my faith all the time and have that overshadow my education.”

Darcy, who also has a degree in psychology, is now studying secondary education. She said she can see herself working in a school’s counseling office. Daniel is a business major with a focus on entrepreneurship, which he plans to utilize in the future, possibly owning his own business.

Finding their place at Calvin

Making the transition back to school was a very condensed process, said Darcy. “We were getting out of the Navy, selling our house, moving across the country and figuring out our school situation all at the same time.” Both Darcy and Daniel said Calvin was one of the most helpful schools throughout the application process. “I think a lot of that is because of Calvin’s size,” said Daniel. “You don’t get lost in the crowd here and you don’t feel like just a number.”

After visiting Calvin for the first time, Daniel and Darcy both said they were sold on the idea of studying here. “Calvin is very military friendly,” said Darcy. “They accepted all the GI benefits that we had and also participate in the Yellow Ribbon program, so anything that the GI bill does not cover, they will go ahead and pick up.”

“The semester has certainly been cause for quite a bit of reflection,” said Daniel. “It has been almost 13 years since I’ve been in a college setting.” The couple said they did not quite know what to expect. “We were a little nervous to come back to school after so long, but everyone has been very welcoming and warm, said Darcy. “It’s been fun to get to know everybody and get to experience life at Calvin and in Grand Rapids.”