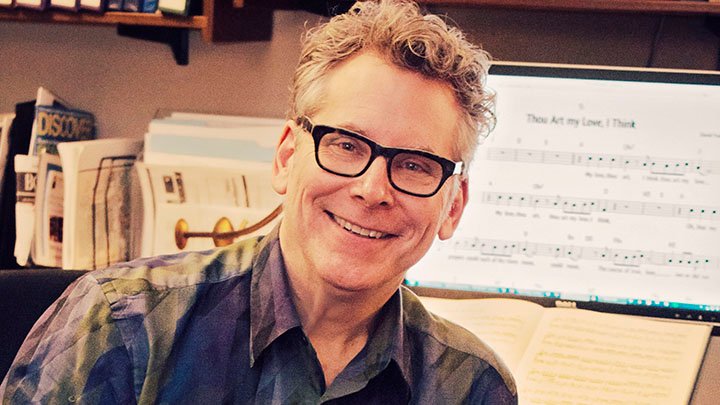 Fuentes is a professor of music at Calvin College and he also enjoys composing music for theater, television and the concert hall.

David Fuentes believes it is impossible to find a piece of music that is not about who we are and what we care about. “In fact, I even offer $500 to any student that can find one,” said the music professor. “I’m not out any money yet.”

Fuentes addresses this in his writing for, Vocation across the Academy, a book collaboration with NetVUE, a nationwide network of colleges and universities. NetVUE is working to create resources that empower students in vocational exploration, said Fuentes. Fuentes contributed chapter five, “To whom do I sing, and why,” addressing the place of music in human flourishing.

Fuentes began his musical journey when his mother picked up his first instrument, an accordion, at a garage sale. From then on, said Fuentes, he had a knack for music and liked making up his own songs. Since then, Fuentes has enjoyed composing music for theater, television and the concert hall as well as teaching a number of Calvin’s music courses.

The topic of vocation is particularly important to Fuentes because part of his job is to help students uncover their personal calling and understand how much of their lives will be directly related to music. “For some this will be 100 percent, for others it will be a smaller part,” he said.

Fuentes believes the way students approach education has changed over the years. In the past, it was about learning reasoning and critical thinking, he said. Then, in whatever field you pursue, you would be pulling from a pool of knowledge. “Students today are trying to be practical about what they are going to go into. If they don’t have a job right out of college, they feel like a failure.”

Fuentes said students are often so focused on finding a career that they forget to ask: What are my gifts and loves? How can I contribute to God’s Kingdom? Educating students about vocation helps them fine-tune and understand all of their giftings, he said. It also gives students permission or a calling to help people.

“I have been nervous about pursuing music as a major for the longest time, but I definitely felt more comfortable after taking his class,” said Alexia White, a student of Fuentes.

Each semester Fuentes asks his students: Why does music matter in human lives? Are people just listening because they like it or is there something deeper?

“I assumed that when I took this class it would be about how music is only meant to bring glory and honor to God,” said White. “But Professor Fuentes helped us understand how that can be one purpose for music, but music can help us explain our biblical worldview. Music can teach us about God, others and ourselves.”

In the chapter he wrote in Vocation across the Academy, Fuentes tackles the issues of artists creating only for self-expression and audiences expecting a profound emotional experience with every artistic encounter. According to Fuentes, this is only a small part of what music can do.

“Sometimes people use music to escape; music is good at that. We go into a different state of mind and can experience great emotion there. On the other hand, music can help us delve into issues,” said Fuentes. “The deepest and most profound emotions come when we realize something. Rather than escaping from reality, music can bring us deeper into reality,” said Fuentes.

“There are two basic ways human beings make sense of the world: rationality and intuition,” said Fuentes. “Music brings those two together beautifully.”