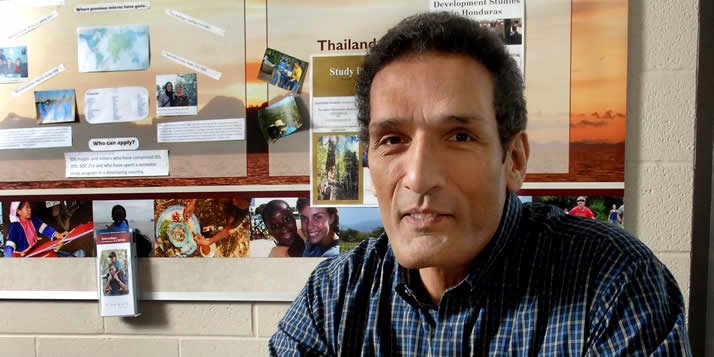 When Adel Abadeer saw an ABC News special on a young boy named Iqbal Masih back in 1994, he couldn't get it out of his head or his heart.

When Adel Abadeer saw an ABC News special on a young boy named Iqbal Masih back in 1994, he couldn't get it out of his head or his heart.

“Masih,” said Abadeer, “was Pakistani. He was sold into forced labor at a young age (four), chained to a loom and worked as part of the carpet industry. He was a slave. But he escaped at the age of 10 and worked to educate people about modern-day slavery. But when he went back to Pakistan they killed him, on Easter Sunday in 1995. I've never forgotten that.”

Abadeer added that a particularly tragic element of Masih's story is that he was rescued from bonded labor with the assistance of a non-governmental organization, Bonded Labour Liberation Front, and was honored and celebrated in both Pakistan and the United States as a hero and a voice of the victims of modern-day slavery. But even that was not enough to ensure his safety. Indeed, said Abadeer, many believe his death was meant to send a significant message to others considering an escape from slavery.

Book A Credit to Calvin

Now, more than a decade after Masih's death, Abadeer, a Calvin economics professor, has written a book—The Entrapment of the Poor into Involuntary Labor— that he hopes will shed new light on the practices of modern-day slavery, including the practice of bonded labor that put Masih into slavery in 1986 at the age of four. He credits coming to Calvin for helping him research and now publish what had weighed on him for these many years—that slavery still exists, that it still imprisons helpless people and that much of the world has no idea of the extent of the problem.

“Being here, seeing myself as an agent of renewal, compelled me to do this research,” he said. “There is no funding for (researching) the poor. But I had the freedom here to work on this project, to bring together my expertise as an economist with who I am as a Christian. So I am very grateful to have had the chance to write this book, and I hope it makes a difference.”

The Entrapment of the Poor into Involuntary Labor is subtitled Understanding the Worldwide Practice of Modern-Day Slavery and, said, Abadeer, even at the beginning of a new century there is sadly a lot to understand.

Masih's sad story, said Abadeer, is an example of a form of slavery—bonded labor—not well-known in North America, but prevalent around the world in less developed countries. At its heart is an economic exchange—thus Abadeer's professional interest—but an economic exchange like few others. Bonded labor often begins with what Abadeer calls “the perpetrator” making a monetary offer to someone he has determined is, in Abadeer's words, “enslaveable.”

“Those who profit from slavery identify their raw materials,” he said. “They often target people in rural and indigenous areas, people who are poor and vulnerable.” The perpetrator might offer parents a loan, often desperately needed, and a child of the family will be used as collateral. “The perpetrator doesn't want the money paid back,” said Abadeer. “They want the child.”

Once the deal is struck the enslaved person is forced to work for no pay, or perhaps a pittance, and the terms of the agreement are such that the initial loan can never be paid back. Indeed, Abadeer notes that some bonded laborers in countries such as India are working as a result of deals made by their parents and grandparents and ancestors even further back.

And while bonded labor agreements are usually illegal, most countries have neither the resources nor the inclination to pursue or prosecute such cases. A country such as India, said Abadeer, had 15 million known bonded laborers a decade ago, and he believes the actual number is likely much higher.

Yet he said that while ending slavery, including bonded labor, on a worldwide scale seems almost impossible, he believes developed countries such as the United States and Canada have a moral obligation to try.

“There are things we can do,” he said. “Investments in education for the enslaveable are critical. Nobody can steal an education that has been received. And education makes people less enslaveable.”

“If enslavement rent is high, modern-day slavery will flourish,” he said. “Interventions should be to lower gain from enslavement and to increase cost.”

To lower gain requires going after the perpetrators, enforcing laws, arresting—“police, police and more police”—and prosecuting. Increasing the cost of slavery is perhaps tougher, but do-able, Abadeer said and includes education, government and non-government programs that address poverty and better education in areas where enslaveables live.

“In a nutshell,” said Abadeer, “better alternatives for the poor such that they don't fall victims to schemes of modern-day slavery perpetrators.”

A Moral Obligation to Intervene

Christians, he said, have a special responsibility in this area: “Christian intervention should take place on both sides of modern-day slavery practices, to rescue the victims, help the enslaveables and develop marginalized communities,” he writes in the book's penultimate chapter. “It should also push for effective law enforcement against the perpetrators and their collaborators. In the process, such redemptive and transforming interventions should take into consideration the harsh environment and high degrees of risk associated with oppressive practices such as modern-day slavery especially in foreign countries or communities.”

In the end, said Abadeer, seeking justice, encouraging the oppressed, or rebuking the oppressors, defending the cause of the fatherless and pleading the case of the widow are God's clear commands to Christians.

“We have an obligation,” he said, “I believe, to intervene as active agents of renewal on behalf of victims and the vulnerable.” 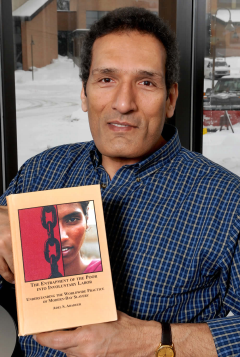 An interview with recent Calvin graduate Austin Graff '07 about his work with International Justice Mission, an organization working to eradicate slavery.

When did you graduate from Calvin and what was your major?

In 2007 with an international relations and history double major.

When did you begin your work with IJM?

I served as an investigations intern in the fall of 2007 and began work as full-time staff in the education department in February 2008.

How would you describe IJM?

What role does IJM play in the area of modern-day slavery and human trafficking?

IJM's four-fold purpose is: 1) victim relief, 2) perpetrator accountability, 3) structural prevention and 4) victim aftercare. IJM has 14 offices and two casework alliances throughout the developing world staffed mainly by nationals who work endlessly to achieve IJM's four-fold purpose. This approach is a holistic approach to ending modern-day slavery. Not only does IJM come alongside local law enforcement to ensure the rescue of those oppressed, but IJM works hard to 1) Hold the perpetrators accountable to prevent it from happening again, 2) Come alongside the local law enforcement to ensure that the public justice systems work for the poor as laid out by local government and 3) Ensure victims are placed in the best quality aftercare to provide counseling, job training, etc.

Are we making progress in eliminating modern-day slavery?

Every day, I work with North American church leaders who are wanting to connect their congregations with God's heart for justice. Seeing God's people enabled to actively engage issues of justice in their communities is inspiring. We are witnessing a shift in the North American church—now people are beginning to see that God's plan to end modern-day slavery is through mobilizing those who follow him to respond! This is why I believe ending modern-day slavery is possible, as daunting as the task may appear. As a good Calvin alumnus, I believe God's plan for his church is to redeem the world. Not just part of the world, but every aspect of it. When God's people respond to the massive need to combat modern-day slavery, I believe we see this happen.

Sharon Cohn Wu, IJM's Senior Vice President of Justice Operations, will speak on January 27, 2009, in the FAC auditorium on the topic, “International Justice: The Law and Human Rights.”