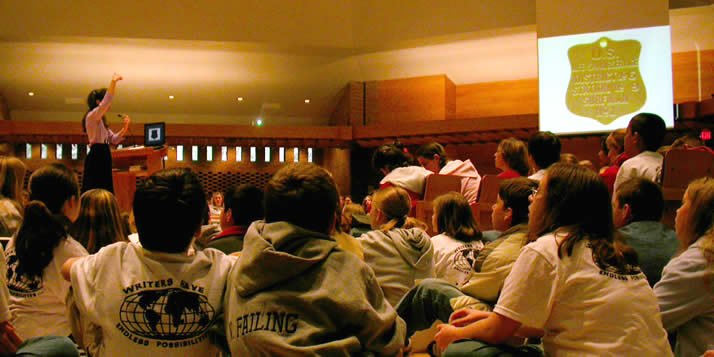 Writers from all over

Students came to the workshop from both public and private schools and trekked from as far away as Saugatuck, Byron Center, Hamilton and Grand Haven. Some were nominated by their teachers to attend, and others came as part of a class. A cadre of Calvin student volunteers clad in blue t-shirts helped the visitors navigate the campus.

The workshop began at 8:15 a.m. in the Fine Arts Center with keynote speaker Liza Ketchum, author of the 2005 young adult novel The Great Hawk Flies. Ketchum, the recipient of both a Massachusetts Book Award for Children's Literature and a Boston Authors Club/Julia Ward Howe Prize for Young Readers, teaches writing at Hamline University.

Following Ketchum’s talk, the students attended their pick of 40 workshops—covering everything from how to write a graphic novel to journalism—led by local professional writers.

Trisha Koning, a sixth grader from Duncan Lake Middle School said that the workshops were fun: “I learned in action class that instead of using words, use dialogue,” she said. Sammie Poff another Duncan Lake sixth grader, said she learned the importance of putting her characters into motion.

Following the sessions, event-goers attended book signings by the featured authors in the Calvin Campus Store. The day closed with a plenary session with Michael P. Spradlin, author of several books for children and teens, including the Spy Goddess series.

Workshop director Nancy Hull, a Calvin professor of English, explained the goal of the workshop is to expose students to the craft of writing: “We bring them on campus to listen to not only the stories the professional authors have written, but also … the stories those authors tell about their own writing life,” she said.

“We want middle school students to believe that they, too, could one day see their names on the cover of a novel or a screenplay or collection of poetry.”

Hull predicted what these students could get out of the experience: “Perhaps they will leave with a fresh idea for a short story. Maybe they'll go back home hearing the voice of a new character in that graphic novel they have been working on. Or they might leave with a book in their hand that they cannot wait to read. Any and all of these results would make the workshop a success.”