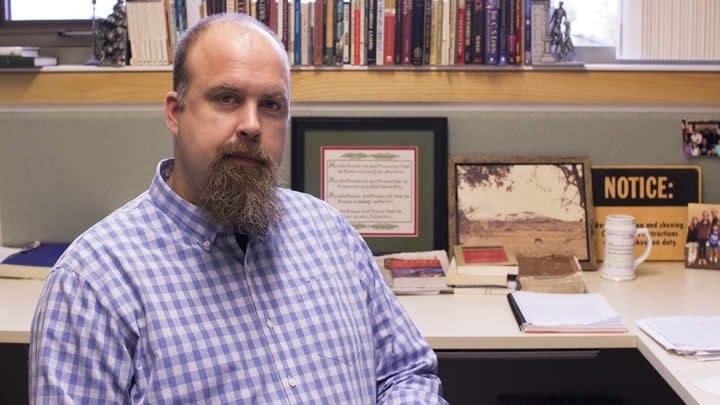 What attracted you to Calvin?

I’d been here before for the Henry Institute Conference on politics and I was impressed not only with Calvin’s facilities, but I have been impressed with Calvin as one of the flagship schools in the CCCU and Christian higher education. Calvin takes not only the life of the mind seriously, but also the practice of being a Christian in a diverse world. Here it’s emphasized that every square inch is under Christ’s lordship; it’s the Kuyper idea that you hear so often. I was also interested in the Reformed perspective. There’s a wide variety of perspectives here, but I was looking forward to working with Calvin students of whom I’d heard many good things.

What are you excited for this year?

I knew I would have good colleagues from conferences that I’d attended, so that’s been exciting. I’m a political theorist and there hasn’t been a dedicated theorist in the department in a few years. With my coming on board we now have our team assembled, like the Avengers. We’re all excited now about no longer rebuilding the department, but building from what we have now.

I was also excited about getting back in the classroom, for meeting students, and learning the Calvin culture. I was told that it might be different and I’m still learning how I should adjust my teaching. I was told that Calvin students might have this midwestern reserve but that’s not been the case. They’ve jumped right into discussion.

What is your area of interest in political science?

Jean Jacques Rousseau was quite critical of Christianity and said at one point that, “It is impossible to live in peace with people you believe are damned,” that it’s impossible to live with your neighbors if you think they’re not going to be saved. I’ve always been interested to find if he’s right about that. Can people get along even if they have really different views about religion, about faith?

So I’m interested in how Christians can live well with neighbors that don’t share their convictions. We might share some things, but not everything, so how can we, as Christians, be true to what we believe without bashing others over the head with a Bible or never saying what we think is true about faith? How can we find that balance of being salt and light in a culture? I think Calvin’s in a really cool place to be looking at those questions.

What I do more broadly is political theory. I cover Aristotle, Locke and Hobbes, some of the “hot potato” topics like marriage, abortion, poverty. I’m interested in those sorts of things.

What makes you so interested in those 'big, hot potato topics?'

What are you researching specifically this year?

One of my research interests is C.S. Lewis. A friend of mine and I are working on a book that’s coming out soon on this, and Lewis wrestles with this problem quite a bit; he’s someone who’s known for defending Christianity, but in his view the England that he was defending was already post-Christian. He’s trying to figure out how he can communicate the truths of Christianity to a culture that was Christian at one point but now is no longer. That’s one way I’m trying to figure out what Lewis did with that. We’re not Lewis, we’re not England, but what lessons can we learn from him?

I’m also writing some online about the constitution and marriage. It’s how we conceive of who should make the decisions on marriage: should it be legislatures? Courts? Those sorts of questions. I’m also working on a John Locke project concerning whether or not we should be forcing religion with the coercion of government.